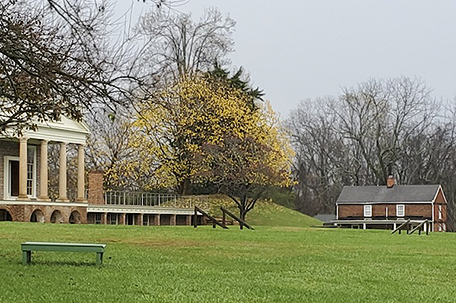 Travelers appear to be seeing a light at the end of the tunnel and that —coupled with enhanced safety precautions, competitive pricing and flexible reservations — make this an opportune time to plan to ease back into the thrill of adventure. It is best to opt for destinations that meet your social distancing comfort level, offer a variety of indoor and outdoor attractions, are affordable and are accessible via safe modes of transportation.

Even though Virginia is rife with cities that fit all the criteria, the city of Lynchburg and environs remain standouts. The city, 30-minutes east of the spectacular Blue Ridge Parkway entrance, dates from a 1757 James River ferry established by John Lynch. (www.lynchburgvirginia.org)

Craddock-Terry and Company, a wholesale footwear distributor, was founded in 1888. Thirteen years later, the resulting shoe factory became the first south of the Mason-Dixon Line. Today, the Craddock-Terry Hotel is a themed boutique hotel that incorporates elements of the original structure with touches such as wooden shoebox breakfast delivery, luxury linens, a  fitness center, parking and wifi. The Craddock-Terry is ideally situated for touring the city and venturing beyond. (www.craddockterryhotel.com)

An excellent way to explore the area is by chronologically following the lives of those who lived there and significant local events which took place. The sites here are of exceptional historic significance and provide a snapshot of ideas, events and individuals that shaped American culture and resonate today.

On March 23, 1775, revolutionary patriot Patrick Henry gave a speech at the Second Virginia Convention in which he said, “Give me liberty, or give me death!” This self-taught lawyer, the orator of liberty, would go on to serve as Virginia’s governor five times. In 1794, he purchased a 1000-acre estate known as Red Hill. He would reside there until his death in 1799. His gravesite is on the grounds.  Patrick Henry’s Red Hill is a gem that interprets his life, works and African American life in the 1700s.

A tour includes 30 locations and begins in the visitor center with interactive museum exhibits and a 12-minute video, “Voices of Liberty.” Henry’s  2-room home is reconstructed on the original foundations. His law office, a separate structure, had been an overseer’s house and contains several items he owned.

In 1799, there were 67 enslaved workers. The estate’s Quarter Place Trail tells the story of the African American presence there and includes a slave cabin reconstructed from salvaged materials from the original slave cabins, as well as an African American cemetery with many marked graves. Red Hill offers a unique and evolving glimpse into the life of the enslaved. This is a “do not miss” site. (www.redhill.org)

Thomas Jefferson inherited the 4,819-acre Poplar Forest plantation in 1773. It would serve as his retreat until he could no longer travel in 1823. He began constructing the octagonal house in 1806 with architecture that combines European, Renaissance Palladian and Virginia elements. The single-story mansion contains a central, 20-ft., cube with 4 octagons encircling it. Light enters via a 16-ft. skylight. All of the working areas are one level below and it is there that the  story of the enslaved  peole who lived there is revealed.

There were 90-100 slaves at Poplar Forest. Skilled slaves completed a large amount of the work on the mansion. James Hemings was solely responsible for the interior woodwork and the roof. Hannah, born at Monticello, served as the cook from 1809-23 and her story is told throughrelated in its 18th century “modern” kitchen. A 23-site walking tour includes two octagonal privies, a slave quarter exhibit, overseer’s house and an 1857 slave dwelling. Note: There is no evidence that Sally Hemings ever visited Poplar Forest. (www.poplarforest.org)

The 223.92-acre Booker Taliaferro Washington National Historic Site is on the site of his original home. Washington was born in 1856 on the Burroughs family tobacco plantation and was freed in 1863 with the reading of the Emancipation Proclamation. He opened Tuskegee Normal School in 1881 with 30 students and went on to become a statesman, educator, diplomat and prominent African American leader.

The .25-mile Plantation Trail winds through the farm areas and showcases the smokehouse, horse barn and replica kitchen cabin. Washington’s mother Jane was the plantation cook and he lived in the kitchen cabin. (#BookerTWashington)

On June 6, 1944, 37 men from Bedford, Virginia were assigned to the 116th Infantry and 31 began the journey to Omaha Beach as part of the D-Day invasion. Of the 26 who were part of the first wave, 16 were killed and 4 wounded almost immediately.

An additional 3 were presumed dead and 1 died later that day. As a result, Bedford bore the largest per capita D-Day loss. On June 6, 2001 the 50-acre National D-Day Memorial was dedicated to all those who were part of the invasion and to honor those who never returned.

The centerpiece of the memorial is a sculptural diorama of the landing of the Allied soldiers and their efforts to scale the cliffs. Bronze necrology tablets encompass Elmon Plaza and are etched with the names of the 4,413 soldiers killed. Every aspect of the memorial has significance including sand, from Omaha Beach, in the invasion tableau. A 44-foot tall arch, inscribed with the operation’s codename “Overlord,” and reflecting pool are focal points.

Of note is a reference to the 320th Barrage Balloon Battalion — the sole African American combat unit to land on D-Day. The balloons were manned by5five men and hovered between the beach and German dive-bombers to protect the allied forces. West Philadelphia’s Corporal Waverly “Woody” Woodson Jr., was a 21-year old medic, a member of the 320th Barrage Balloon Battalion, died in 2005.

Because of its age and location, Lynchburg has always stood at the forefront of historical events and current realities and getting in touch with the past is a great way to reboot your travel experiences. All of the listed sites adhere to health protocols. Call ahead for hours, days of operation and COVID updates. (#visitlynchburgva)