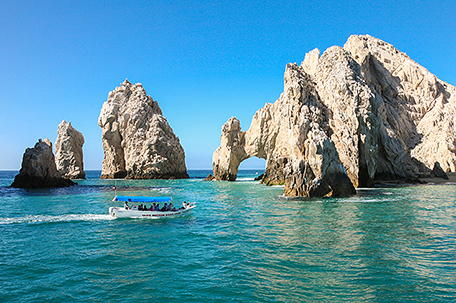 Baja California Sur refers to the lower portion of California, a peninsula amid two bodies of water, the Sea of Cortez and the Pacific Ocean. Mexico has more coastline than any other nation and 1,234-miles of it are in the Baja. There are two major resort cities located at the peninsula’s southern end, San José del Cabo and Cabo San Lucas, joined by El Corredor, a 20-mile scenic road that links all the sites and attractions. (http://visitloscabos.travel)

Archeological evidence points to human habitation in the area around 13,000 years ago. Signs indicate sites where “pinturas rupestres”, prehistoric rock paintings can be viewed. Some paintings are more than 100-ft. in length and 25-ft. in height. Three indigenous tribes, the Cochimies, Guaycuras and Pericues, greeted the first Spanish explorers in 1533. The group, sent by Cortés, reached the Baja and believed it to be an island. In 1535, Cortéz led 300 men and 37 women to what was then called “the Isle of Pearls” to found a colony.

The Spanish used the region as a provisioning point on long trading journeys and pirates soon found it lucrative to raid the ships. The Spanish felt it necessary to establish a permanent presence to deter both pirates and native revolts. In 1730, Mission San Jose del Cabo Añuití was founded to convert the local population and stabilize the region. Four years later the church was destroyed and the founder, Father Nicolas Tamaral, was killed by the Pericues. The mission was rebuilt further inland, and in 1767, the Spanish ceded mission control to the local Mexicans. Today, the mission is on its second site in the heart of the historic main square amidst craft shops and restaurants and is an ideal place to blend with the local culture. 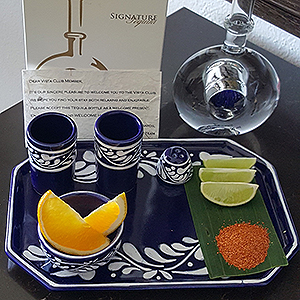 By the mid-1900s, Cabo San Lucas had become recognized by American marlin fishing aficionados and a few wealthy vacationers. The 1,063-mile Carretera Transpeninsular Highway, completed in 1973, opened the region to development and tourism. It also provides easy, marked access to sites and attractions.

Los Cabos is as close to a perfect destination as is possible. The weather and scenery are ideal companions and the activity options are numerous. Visitors can select from a menu that includes camel and horseback riding, cruising, deep-sea fishing, golf, kayaking, off-road safaris, scuba diving, snorkeling and windsurfing. Wild Canyon Adventure offers a 4.5-mile Zip Line, bungee jumping at 300-ft from a glass-bottom gondola from the 1,082-ft Los Cabos Canyon Bridge, the longest wooden pedestrian bridge in the world

Jacques Cousteau deemed the region “The World’s Aquarium” because the waters contain 33 percent of the globe’s marine mammal population. Whales migrate from Alaska to breed because of the abundant fish in the Sea of Cortez and watching the migration, January through March, is priceless. Eight of the 11 whale species, including the Blue Whale, can be seen.

Cabo Pulmo National Marine Park, 60-miles from Cabo, is the site of the only surviving coral reef in the Gulf of California. It is a 20,000-year old living reef with 5-miles of beach with 17 dive sites with visibility up to 100-ft. and an underwater canyon.

Los Cabo’s iconic symbol is Los Arcos, a limestone formation located where the Sea of Cortez joins the Pacific Ocean. The formation is also referred to as Land’s End because a straight line drawn south from the golden rock would not hit land until it reached the South Pole.

Even with all there is to do, the biggest draw continues to be the Mexican culture and the warmth of the people. Hilton Los Cabos Beach & Golf Resort has created the ultimate way to combine a luxurious stay, experiential adventures and immersive cultural experiences. The 375-room hotel has won the prestigious Connie Award, for the highest customer rating, six consecutive times. All accommodations have water views, upscale amenities, designer linens and culturally inspired furnishings and artwork. 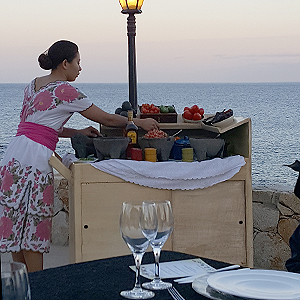 Interactive classes are regularly scheduled that both immerse you in the culture and trigger your inner creativity. Sessions include Tequila Tasting, Miraflores Cooking with Chef Mauricio Lopez, a visit to Tiki’s Local Farm to select vegetables and herbs and have a farm to table breakfast, Towel Origami, Bath Salt Making, Flower Arranging and Piñata Making. Each class provides information you can take home and surpasses your average souvenir. The piñata originated in the 1300s in Europe and migrated with the Spanish. They were originally clay pots (in class you use clay) and are still crafted into a 7-coned star. The cones represent the Seven Deadly Sins and breaking the piñata gets rid of sins. Players are blinded because they are acting on faith.

The Hilton Los Cabos Beach & Golf Resort is an outstanding wedding venue because of the weather and the hotel services offered. One of the couples romantic choices, not to be missed, is a beachfront, five-course, Full Moon Dinner. These can be arranged during the period of the full moon and a are breathtaking memorable experience. (http://www.hiltonloscabos.com)

On Monday, June 5th tickets go on sale for Winston-Salem’s 15th season of the National Black Theatre Festival (NBTF). “Black Theatre Holy Ground” offers a six-day, professional theater festival that includes performances, workshops and an international marketplace. The event will take place in locations throughout Winston-Salem from July 31-Aug. 5 and will be chaired by Anna Maria Horsford and Obba Babatundé. (http://www.nbtf.org)

Sight and Sound Theater in Lancaster, “Where the Bible Comes Alive”, is presenting an original production of “Jonah”. This compelling story of the prophet is told through creative use of music and dance, colorful costumes, live animals and stunning technical effects until October 14, 2017. Tickets and information are available online. (https://sight-sound.com)