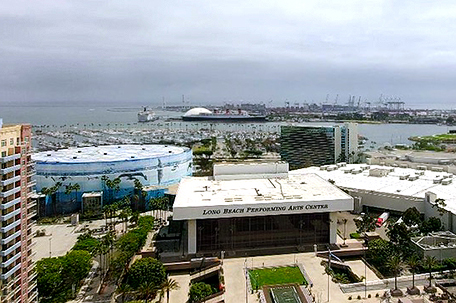 Long Beach, California, situated approximately 30 minutes south of Los Angeles, is a coastal gem with more than its share of lures for the traveler. The city, deemed one of the most ethnically diverse big cities in the country, has an average high temperature of 82˚ and low of 64˚ with negligible rainfall.

It was named Long Beach in 1888 for the beach winds of 22-miles bordering the Pacific Ocean along San Pedro Bay. Today it offers a 3.5-mile bike trail, 11.5-miles of inland waterways and bays and more than 30 water view restaurants. The city has world-class attractions and provides metro and free bus service, as well as water transport — AquaLink and AquaBuses — for easy access to sites. (www.ridelbt.com/routes-and-services)

The city’s uniqueness extends to its history. When Juan Cabrillo sighted the coast in 1542, Native Americans had inhabited the region for more than 10,000 years. They inhabited three large settlements — Tevaaxa’anga, Ahwaangaandand Povuu’nga — but were moved to Spanish missions in the 1800s and became known as the Gabrieliño after the San Gabriel Mission.

A 1784 Spanish Land Grant provided the land layed out as Long Beach in 1880 and the 1884 Rancho Cerritos. Cogged stones were uncovered at Rancho Cerritos in 1930 that dated from 2,000  to 5,000 BC, verifying an early indigenous presence. The Monterey-Colonial two-story adobe rancho interprets the intersection of Spanish, Mexican and North American cultures. “Tevaaxa’nga to Today: Stories of the Tongva People” relates the story of the Tongva through artifacts and displays in the visitor center.

Constructed by Native Americans, the rancho is furnished with antiques from the 1870s sheep ranch era. Guided tours, an orientation film, special programs, a reference library and 4.7-acre garden are on-site. (www.rancholoscerritos.org)

Long Beach’s most renowned resident is her RMS Queen Mary, regally docked since December 1967, in the harbor. Since its maiden voyage in 1936, the ship has served as an exquisite example of art deco and the Gilded Age and was once the largest, fastest and most luxurious ship afloat.

The Queen Mary is one of the world’s most haunted sites. “Paranormal Investigations and Haunted Encounter” tours and “Illusions of the Past,” a theatrical séance, are offered in addition to a menu of specialized tours. Note: Stateroom B340 is said to be the most “active” room.

The ship is a hotel featuring online reservations, a museum and offers shopping and dining. Sir Winston’s Restaurant and Lounge and the Queen Mary Royal Sunday Brunch are singular culinary experiences. QM TIP: All of the guides are excellent, but for a truly awesome tour request Commodore Everette Hoard. (www.queenmary.com)

Rainbow Harbor is home to the Aquarium of the Pacific, Southern California’s largest aquarium.

Over 50 exhibits include more than 11,000 animals in the main galleries and exterior display areas, including an interactive shark lagoon.

The 1996 Museum of Latin American Art (MOLAA) is the sole museum in the country dedicated to the presentation and preservation of modern and contemporary Latin American art.

Shoreline Village, reminiscent of a fishing village, provides some of the area’s best shopping and panoramic viewing options.

Here you can dine, stroll, rent a bike or watercraft, ride a carousel and shop in a variety of eclectic stores. Louisiana Charlie’s BBQ & Cajun Cuisine is a waterfront eatery that puts a southern spin on seafood you will long recall. (www.shorelinevillage.com)

Naples is an Italianesque community established in 1905 on three islands. It has winding streets lined with gracious homes fronted by circuitous canals.

You can stroll the streets, pause in the plaza and take a one-hour Gondola Getaway Cruise on Alamitos Bay in an authentic gondola. GGC TIP: Request serenading gondolier Andrew McHardy. (www.gondolagetawayinc.com)

Two musts are trips along Retro Row and a visit to the Long Beach Antique Market. Fourth Street between Cherry and Junipero, Retro Row, is a recognized source of vintage-inspired clothing and furnishings. Film set designers are known to purchase items there. The antique market has more than 800 vendors spread over 20 acres. Plan to spend substantial time at both venues.

Before Ferris Bueller took his day off, Gilligan set sail for his 3-hour tour or Star Fleet Academy were filmed in Long Beach, it was the first West Coast movie center, established in 1910. By 1918, Long Beach’s Balboa Studios was the world’s most productive independent studio. Numerous silent films were made with Fatty Arbuckle and Buster Keaton.

Arbuckle’s home still stands. The industry relocated to Hollywood around 1921 when oil was discovered on Signal Hill and Alamitos No. One became the most productive oil field in the world.

Unique tours require exceptional dining experiences to round out your adventure. Hangar Marketplace’s restaurants fill the bill. The Marketplace complex is 266,000 sq. ft. of mixed use space, and includes shops, restaurants, indoor climbing gyms and outdoor spaces. The newly established, 16,800-sq. ft. Hangar currently features eight restaurants inside a repurposed airplane hangar and options are representative of the multiculturalism of Long Beach. (www.longbeachexchange-lbx.com)

Long Beach is a great hub for touring the area and you can channel your inner royalty by plunging headfirst into all the city has to offer. Long Beach is a traveler’s dream. (www.visitlongbeach.com)

The TWIST World Charging Station takes the worry about charging up to four devices with one, international, stand-alone unit. At 4.6” x 5.3” X 2.4” it fits easily in a carry-on, functions in 150 countries and weighs 0.35 lbs. Information is available at www.thegrommet.com