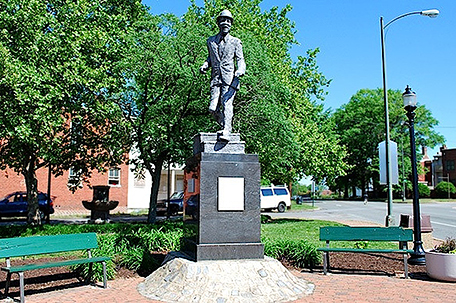 Richmond, Virginia, as one of the country’s oldest cities, has been at the nexus of cultural history since its original settlement in 1607 and platting in 1737. It was officially named because of its similar views to the area of Richmond Hill in England, and incorporated in 1742. The view remains almost unchanged from today’s Libby Hill. (www.visitrichmondva.com).

After the American Revolution, Richmond thrived as a manufacturing, shipping and slave-trading center. Virginia’s population by 1776 was 50 percent enslaved, and in1860 there were more slaves and free Blacks in the state than in any other. It is estimated that 40 percent of the enslaved passed through the city, an estimated 300,000 people. Slave ships docked in the James and York Rivers and Richmond became the second largest hub for the internal slave trade, sending the enslaved “down the river”. 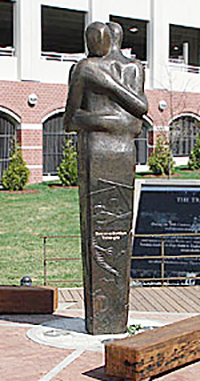 Shortly after Virginia seceded from the Union in1861, it was deemed the Confederate capital and the White House of the Confederacy was relocated there from Montgomery, Alabama. The city had many resources, but it was a targeted 100-miles from DC and the US Army’s call became “On to Richmond.”  Richmond practiced urban slavery and many Blacks were highly skilled, owned by industrial corporations, and some were allowed to hire themselves out for wages. They were made to assist in the war effort and sales continued until one month before the Civil War ended.

I strongly suggest that visitors take a guided tour to get an overview. The 2-hour Richmond Trolley Company tour encompasses more than 12 of the most significant sites and can be reserved online. (http://richmondtrolley.com).

Tredegar Iron Works produced vast quantities of Confederate artillery, heavy ordinance, buttons and armor plating during the Civil War. It employed more than 1,000 White workers, slaves and free Blacks and everyone was paid equal wages. Today the complex is home to the American Civil War Center and the National Battlefield Headquarters at Tredegar. The Civil War Museum preserves one of the best collections of Civil War photographs, documents and artifacts. The museum was the first to examine the Civil War from three perspectives, the Union, the Confederacy and African-Americans. (http://www.tredegar.org).

Self-guided tours proceed chronologically through the war, beginning with a film that asks visitors to vote on what they believe was the cause of the war. Galleries are replete with dioramas, photographs. and videos. Every aspect of the war is covered. This museum is mandatory for anyone seeking to understand the Civil War in an unbiased manner. (https://acwm.org). 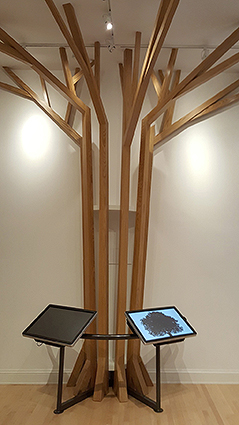 Equally relevant is a visit to the Black History Museum and Cultural Center of Virginia (BHMVA). Founded in 1981 the museum relocated to its current space, constructed as an armory for African American servicemen, in 2016. The first floor galleries interpret Emancipation, Reconstruction and Civil Rights. A 35-ft. touchscreen timeline provides a visual journey starting with Egypt BCE. Other exhibits include the stories of Victor Green and his creation of the Green Guide and that of Irene Morgan whose Supreme Court case changed segregation laws on commercial passenger travel. A replica of the statue of Arthur Ashe on Monument Avenue provides a wonderful photo op. The second floor galleries house temporary exhibits. A huge sculptural depiction of the Emancipation Oak is easily a highlight of the tour. The oak, located in Hampton, VA, was the site of the first public southern reading of the Emancipation Proclamation. (www.blackhistorymuseum.org).

A number of years ago the city established the Richmond Slave Trail that relates the stories and history of the slave trade from Africa to Emancipation, and all 17 of the sites have been authenticated. Lumpkin’s Jail is one of the most intriguing sites. The compound functioned as a housing and slave auction operation for 30-years. In 1844 Robert Lumpkin took ownership. Upon his death in 1866, his widow Mary Ann, a former slave, became the owner and rented the facility to a Baptist minister who founded Colver Institute for freedmen in the former jail. Today the school is Virginia Union University, an HBCU. Site excavations began in 2005.

In 2007 in Shockhoe Bottom, midway the trail, a 15-ft. bronze Reconciliation Statue was placed. There are identical statues in the two other locations, Liverpool, England, and Benin in West Africa, recognized as ports in the triangle trade.

Jackson Ward was one of Richmond’s first and largest, African American districts to be established. It was a center of economic and cultural influence and was widely recognized as the ‘Wall Street of Black America’ and the ‘Harlem of the South.’ Today it is a National Historic Landmark. (https://www.virginia.org)

Bill ‘Bojangles’ Robinson lived in Jackson Ward and in 1933 he watched two children attempt to cross at a dangerous intersection. He then paid for the neighborhood’s first traffic light to be placed there. A 9.5-ft. aluminum monument now stands at that intersection in a small plaza. Robinson is depicted dancing down a flight of stairs. 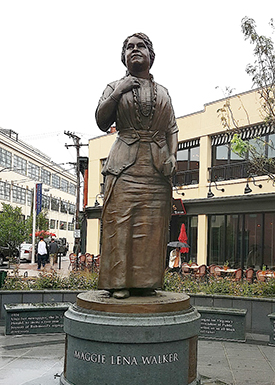 Maggie L. Walker and her family resided there in a home built in 1889. In 1903 she was the first woman to open a bank, St. Luke Penny Savings, in the United States. Richmond’s newest sculpture is the Maggie Walker Memorial dedicated on her 153rd birthday. She stands on a 4-ft pedestal, bankbook in hand, surrounded by ten marble benches etched with her accomplishments.

The Graduate Richmond is one of a collection of ten curated, thematic properties situated in cities with dynamic and historic Universities. The hotel pays homage to past graduates of VCU with a special nod to Richmond native Arthur Ashe. @visitrichmond

There are two dining options available to guests on the premises, Brookfield and The Byrd House and 205 guestrooms complete with modern amenities, the latest technology, designer linens and Malin & Goetz bath products.

The Graduate Richmond is located within walking distance of shopping, dining and the most significant city sites. @graduaterichmond