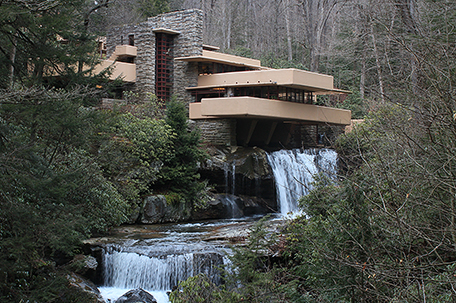 Pennsylvania’s Laurel Highlands, recognized for its sheer beauty, inspires visitors to take the long way home, seek out the hidden path and wander in search of the endless possibilities the area offers. (laurelhighlands.org)

Laurel Highlands was home to native tribes — most notably the Algonquin, Iroquois, Monongahela and Lenape — for thousands of years prior to first European contact. It was their pathway across the Allegheny Mountains to the Ohio River Valley, Nemacolin’s Trail, which was named after a Delaware chief, that facilitated settlers’ western movement. This “National Road” became pivotal to westward expansion and colonial history. Following the newer 68-mile Laurel Highland’s Scenic Byway will lead you to the majority of the sites and venues from outdoor activities to unique historic sites. (nationalroadpa.org)

Fort Necessity National Battlefield is credited with being the site of the first battle of the French and Indian War. Washington’s first military engagement and only surrender occurred here. This wilderness fort is only 53-ft. around within a wooden stockade. The French demolished the fort in 1754. The visitor center provides a good overview. (nps.gov/fone)

Westmoreland County was established in 1773 and is home to the state’s steepest slope, seven colleges and universities and the renowned Westmoreland Museum of American Art. Founded by Mary Marchand Woods, the collection consists of 3,500 objects of fine and decorative art representing regional art spanning 400 years. The certified LEED silver structure was designated the “Best Designed Museum in PA.” (thewestmoreland.org)

Latrobe, the Pittsburgh Steelers’ summer home, was incorporated as a city in 1999, but was settled in the 1800s. It is filled with singular sites and eateries and was home to golfer Arnold Palmer and comedian Jackie Mason during a three-year period when he served as a rabbi. (latrobelaurelvalley.org)

In 1904, the banana split was created in Latrobe by pharmacist apprentice David Strickler at the Tassel Pharmacy. The popularity of the dessert prompted Strickler to have a special serving dish made and this iconic dish was depicted on a postage stamp in 2016. Visitors can order one built to the original specifications at the Valley Dairy Restaurant. (valleydairy.net)

Dining in Latrobe is an experience at DiSalvo’s Station. The former train station is a National Register Landmark and was chosen one of 11 restaurants in the country “Most Worthy of a Destination Stop” by the Culinary Institute of America. The Italian cuisine is fresh and creative and the service exemplary. (disalvosrestaurant.com)

Saint Vincent Parish, the first Catholic parish west of the Allegheny Mountains, was founded in 1790 and the college named after it was established in 1846. A highlight of the campus tour is  Saint Vincent Archabbey Basilica, the oldest Benedictine monastery in the US and one of the world’s largest. The 230-ft. floor is hand-hewn Carrera marble and its walls are filled with priceless sacred artworks. (saintvincentarchabbey.org http://saintvincentarchabbey.org)

The Fred Rogers Center at Saint Vincent College honors the fact that Latrobe was Mr. Rogers original neighborhood. The center’s archive holds more than 16,000 items. The “Life Before the Sweater” gallery recounts his early life and exhibits feature objects from his 895 shows. Special items include original puppets, his shoes and, of course, his iconic sweaters. He is also pictured on a postage stamp. Rogers is interred in the nearby Unity Cemetery, but he lives on as a seated sculpture in James Rogers Park. Visitors can have a seat and a photo on the bench beside him. (fredrogerscenter.org)

The Foster and Muriel McCarl Coverlet Gallery, one floor below the center, is presenting an outstanding exhibit until January 11, 2019. “Blood Cotton: Legacies of Slavery and Exploitation in the Decorative Textile Industry”, explores cotton as a driving force in the American economy and the continuation of slavery.  (mccarlgallery.org)

Frank Lloyd Wright’s most recognizable home is Fallingwater, a stunning blend of art and nature. The 1930’s structure, built over a waterfall, was constructed by area craftsmen using regional materials as a 1,500-acre weekend home for a Pittsburgh executive. The award-winning house is a National Historic Landmark and Commonwealth of Pennsylvania Treasure. The onsite Fallingwater Café is Green Restaurant Certified. Tours are offered and reservations are highly recommended. (fallingwater.org)

Seven-miles from Fallingwater is a second Wright home, Kentuck Knob. This Usonian masterpiece is also the location of a sculpture garden. Tours are available via the website. (kentuckknob.com)

The Wildlife Academy boasts an equestrian center, animal nursery and animal habitats. Should you bring your own favorite animal you can avail yourself of the pet resort & spa. At a leisurely pace you can visit the Lady Luck Casino, Hardy Family Art Collection and numerous shops on property.

On September 11, 2001, 40 passengers and crew foiled a terrorist strike, planned to hit the US Capitol, by attacking the cockpit. The Flight 93 Memorial honors those heroic individuals with a Memorial Plaza, Wall of Names, artifacts and a 93-ft. tower. The memorial is located at the site of the crash and the tour is self-guided.  (nps.gov/flni/index.htm)