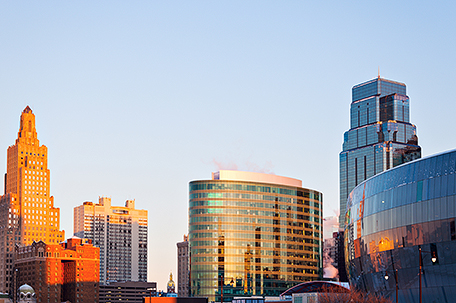 At the close of World War I, America viewed itself differently and returning soldiers were determined to avail themselves of the American Dream and Kansas City, Missouri stood at the nexus of historic changes. www.visitkc.com 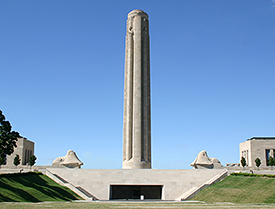 The Liberty Memorial, located at the National World War I Museum

The National WWI Museum and Memorial is the absolute best place to start. It is the country’s sole museum dedicated to preserving and promulgating the stories of this global conflict. It opened in 1926, is one of the top 23 museums in the nation and is a National Historic Landmark. The collection exceeds 100,000 objects.

Entrance into the museum is gained via a glass bridge over a field of 9,000 red poppies, each poppy representing 1,000 battle casualties. Self-guided tours begin with an introductory film. Galleries explore the war from all viewpoints and they are filled with large photographs, artifacts, dioramas, interactive areas, personal stories and films.  Highlights of the tour include replicated trenches and a 1918 Model T ambulance.

More than 375,000 African Americans served in WWI, 200,000 of them served overseas and approximately 10 percent saw combat. The most famous of the black combatants were the Harlem Hellfighters of the 369th Infantry, originally the 15th New York Colored National Guard regiment. The French suffered massive casualties and in 1917 the 369th was sent to replenish their numbers. The French called them ‘Les Enfants Perdus,’ The Lost Children, until their prowess in battle caused them to dub them the Hellfighters. In 1918 two of the men were awarded the Croix de Guerre, the first Americans to receive the award in the war. They spent more days, 191, on the front than any other Americans, none of them were ever captured and they never lost any ground once taken. A gallery recognizes their contribution.  www.theworlsdwar.org

The Hellfighters left an indelible mark abroad under the leadership of bandleader and regimental lieutenant James Reese Europe. He was assigned to form a band, he did and they introduced jazz to the world. To better understand the impact of jazz internationally you can stroll over to the 18th & Vine Historic District and the American Jazz Museum and Walk of Fame. 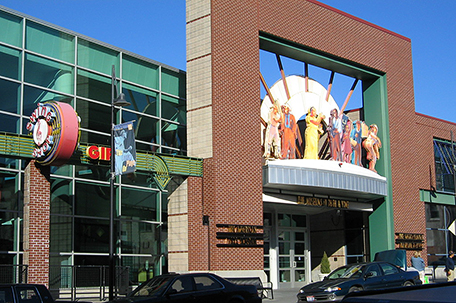 The museum interprets the history of jazz through changing exhibits, the Masters Exhibit and Jazz and Technology and the Blue Room, an on-site jazz club, presents regularly scheduled live performances. Highlighted masters include Armstrong, Ellington, Fitzgerald and “Yardbird” Parker. The jazz experience is conveyed through use of memorabilia, artifacts, photographs and personal items. www.americanjazzmuseum.org

Selected jazz artists are honored annually with a bronze star placed on the walkway around the museum. www.americanjazzwalkoffame.com

The American Jazz Museum shares a facility with the Negro Leagues Baseball Museum just as the stars in both fields shared the period before and between the World Wars. No lens better reflects the story of the African American’s 20th-century pursuit of their goals than this $2.5-million museum. In 1920, a group of owners led by Rube Foster, established the Negro National League, the first black league. 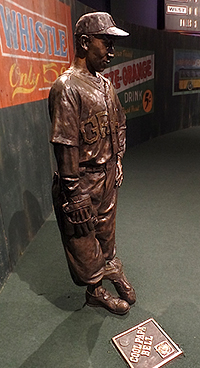 Visitors enter through stadium-style turnstiles and begin the tour with an orientation film, “They Were All Stars.” The museum tells the story with a masterful use of artifacts, photographs, documents and 15 interactive stations. As you complete the tour visitors are invited to join the most legendary players of the Negro Leagues in the form of life-sized bronze sculptures at their positions on the Field of Legends. Satchel Paige’s original gravestone is on display. The museum has a complete schedule of educational activities and special events. This information can be accessed online. www.nlbm.com

Two of the Negro Leagues’ greatest legends, Leroy Robert “Satchel” Paige and John Jordan “Buck” O’Neil, are interred in Forest Hills Cemetery. O’Neil’s gravesite is unadorned but a monument dedicated to his career and tireless work on behalf of the Negro Leagues is located in Monarch Garden. Satchel Paige is honored with a large memorial on Paige Island. Visitors can obtain a map in the office.

KC has several world-class museums and exhibitions that cast a spotlight on the cultural history of the United States up to and after WWI. Each offers self-guided tours and each is totally unique.

The Nelson-Atkins Museum of Art is actually two structures, the first built in the 1930s.  The newer, Bloch Building has been deemed an “architectural marvel.” The museum’s collection encompasses 5,000-years of world art and is rated one o the top museums of its type in the nation. The stunning American Indian Galleries include objects from pre-European contact to contemporary American Indian art of North America. Galleries are arranged geographically beginning in the East. There are two restaurants and a garden on-site so that visitors can make a day of it. www.nelson-atkins.org

The Kemper Museum of Contemporary Art exhibits a collection of modern and contemporary art. The restaurant, Café Sebastienne, is an absolute must see. The café serves seasonal, local cuisine in an artistic setting. The Kempers commissioned African American artist, Frederick James Brown, to adorn the restaurant’s walls. His work, “The History of Art,” is specific to the site and features 110 variously shaped, interlocking, canvasses that interpret individual artworks that span the globe and date from 1445 to the mid-1990s. Dining there is a totally unique experience. www.kemperart.org

KC’s Union Station dates from 1914 and closed as a depot in 1985. This station was the one used by soldiers returning from all the major wars as well as musicians spreading jazz around the country. www.unionstation.org

Kansas City Fun Trolley Tours depart from the station. These guided tours provide a good overview of the history and attractions in the city. Tickets are available online and reservations are recommended. www.kcfuntours.com

Fine-scale miniatures are tiny, functioning, replicas of furniture, artwork and ceramics created by artisans. The world’s largest collection of miniatures and one of the largest antique toy collections is on view at the National Museum of Toys and Miniatures. The museum now houses 72,000 objects, 21,000 miniatures, largely on a 1:12 scale, 1-inch equals 12-inches. A 7-inch cabinet with 19 secret compartments is a real showstopper. Self-guided tours include interactive displays and toys exhibited on the second floor both thematically and chronologically. www.miniaturemuseum.org

Kansas City is recognized as the Barbecue Capital of the World and it is home to more than 100 barbecue restaurants. Henry Perry, an African American, is considered the “father of Kansas City barbecue” because his was the first documented commercial barbecue restaurant. He began selling slabs of barbecue wrapped in newspaper from a cart. Annually the American Royal World Series of Barbecue, with 500 international teams, is held in KC. This year the dates are Oct. 26-30. #visitKC