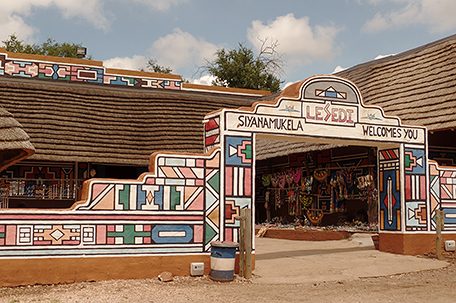 Africa is not a country but a continent, and as such it has been the subject of conjecture, misconception and myth. The Republic of South Africa is approximately 471,008 square miles in size and contains almost every known precious stone, mineral and metal including chrome, cobalt, copper, diamonds, gold, manganese, nickel, platinum and titanium. Archeological evidence points to South African mining as early as 250 BC.  The country’s riches quickly became fair game for Europeans entering what they considered “empty” land and these two factors would prove significant in the establishment of the system of apartheid that relegated indigenous Africans to second-class citizenship. Johannesburg was “ground zero” for the struggle to end apartheid. It houses the memorials, sites and museums that best interpret this history and that of the cultures involved.

Visitors can start their tour where human life began, the 1999 designated “Cradle of Humankind World Heritage Site” two-million-years old archeological which contains discoveries, and is the basis for the “Out of Africa” theory. The theory, that humans evolved in Africa and migrated from there across the globe, gains credence in the Sterkfontein Caves and 12 other sites, with displays of hundreds of Hominid bones. There are two exhibition centers, one at the caves and one in Maropeng, built to resemble an ancient burial mound. (http://thecradleofmankind.net) 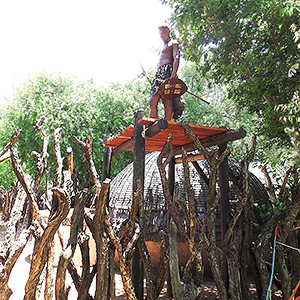 Lesedi, “Place of Light,” Cultural Village is an absolutely wonderful, interactive experience into tribal South Africa. The outdoor living history museum complex was established in 1995, and consists of five traditional villages that are built and populated by members of each tribe. The cultures showcased are the Basotho, Ndebele, Pedi, Xhosa and Zulu. Visits begin with a traditional African welcome onto the grounds.

The official program begins with an orientation film followed by a hosted walking tour of individual villages. In each homestead, villagers present information on and demonstrations of their dress, customs, rituals and architecture. Guests return to the dance “boma” for a performance presented by each group using customary instruments and dance accouterments. The formal program ends with an extensive feast with music and a buffet of standard African fare. Prior to departing guests should visit the African marketplace to purchase handcrafted gifts and souvenirs. TIP: I always take a photo of the craftsmen and include it with the items I give as gifts. Lesedi offers overnight accommodations in traditional structures fully equipped with modern amenities. Put this entire experience on your African basket list! (http://aha.co.za/lesedi) 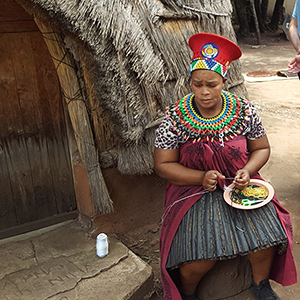 Diamonds and gold were discovered in South Africa in 1867 and 1876. Their discovery led to a crush of “outlanders,” and led directly to the Boer Wars in 1899-1902 and the formation of the Union of South Africa in 1910. Repression of native Africans (Bantus), Coloreds and Asians led to the founding of the African National Congress (ANC) two years later. As part of the system of apartheid, non-whites were marginalized and in 1950 the Group Areas Act demanded that nearly 2 million Africans be removed from cities and made to live in poverty-stricken, highly regulated townships.

Soweto, South Western Townships, the most recognized of the townships, was first settled at the turn of the 20th-century when men left rural villages to labor in the mines. In 1948 the government began forcing Black Africans out of Joburg and into Soweto. The township was located on land that was polluted by the mine and designed to promote control of the inhabitants. Houses could be no larger than 4 rooms of equal size with no public services. Streetlights were not installed until 2010. Soweto, the most densely populated township with approximately 1.5-million residents, is a mere 10 miles from Joburg.

Soweto protested apartheid vigorously and in 1976 the Soweto Rebellion led the charge to dismantle the system. More the 170 students were killed. In 1985 riots broke out again and continued until apartheid ended.

Tourism has become an economic engine for the people of Soweto and several tour companies offer guided tours. There are few street signs or maps, so I strongly suggest that you book a tour or be accompanied by a resident. There are a number of historic sites that are well worth the trip including the Chris Hani Baragwanath Hospital, the largest in the country.

The 33-story Orlando Towers, once a power station, are the iconic symbol of Soweto. Built in 1935, the mural decorated towers were converted into an extreme-sports complex in 2008. Bungee jumping is offered. (http://www.orlandotowers.co.za) 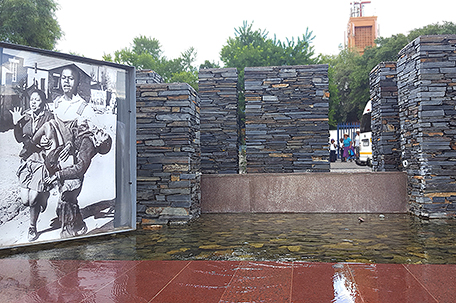 Walter Sisulu Square of Dedication was the site of a gathering in 1955 of 3,000 people to adopt the Freedom Charter. It was used as a model for the current constitution. Ten pillars represent the clauses of the charter and a museum provides insight into the movement.

In 2002, the Hector Pieterson Museum and Memorial was inaugurated. The museum is currently closed for repairs, but visitors can access the stunning memorial. Thirteen-year old Pieterson was killed in the 1976 Student Uprising. A photograph of the dying Pieterson being carried by another student gained international attention.

Vilakazi Street, the only street in the world that housed two Nobel Peace Prize winners, President Nelson Mandela and Anglican Archbishop Emeritus Desmond Tutu, is on the route. The restored Mandela House is open for tours and features personal items and artifacts from the years he, Winnie Madikizela-Mandela and his family lived there beginning in 1946. Mandela lived there only 11 days after his imprisonment ended. (http://mandelahouse.com)

Regina Mundi, the township’s largest Catholic Church, was a sanctuary site for students fleeing the violent protest that killed Pieterson. The church was rushed by police officers who opened fire on the 4,000 students inside. A tour of the interior of the church reveals bullet holes, a Black Madonna and a series of stained glass windows that recount the harrowing story. Police shot off one hand of a Christ sculpture. The congregation removed the other hand stating that they are now “the hands of Christ.” Michele Obama toured the church in 2011. (http://reginamundichurch.co.za)

The Apartheid Museum is the premiere place to put South African history in perspective. It opened in 2001, adjacent to and funded by Gold Reef City. The 32 exhibitions guide visitors from the origins of apartheid to the New South Africa and the reconciliation process. As you enter, exterior exhibits relate South Africa’s pre-history. The museums displays interpret the story of apartheid through films, photographs, artifacts and dioramas. This is an outstanding museum and one not to be missed to understand the real South Africa. (http://www.apartheidmuseum.org)