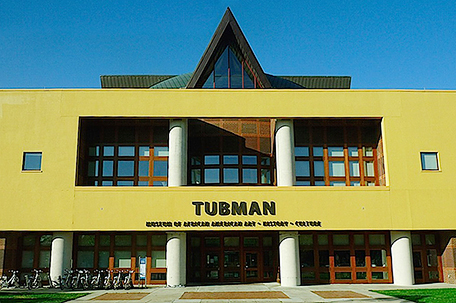 “Find a way to get in the way.”  — Georgia Congressman John Lewis

Georgia is widely considered the homeland of the Civil Rights Movement.

From the moment enslaved Africans landed in the Americas, there have been those who fought for both civil and human rights in the state.

As early as 1785, a Black woman — Lucy Terry Prince — argued her land rights in court against her White neighbors and won. However, it was not until the 1960s that the movement found a charismatic leader in Rev. Dr. Marti Luther King Jr. and a home. Georgia’s Civil Rights Tour begins in Atlanta and guides you to the most important sites and museums connected with the history and activities of those who fought so tirelessly for freedom. (#exploreGeorgia)

Macon’s Tubman Museum — the Southeast’s largest museum dedicated to the art, history and culture of African-Americans — was founded in 1981 by a priest, Father Richard Keil. It opened in a new 49,000-sq. ft. facility in 2015. Visits begin with the mustard colored exterior, which is the color of Nigerian clay and a patchwork design reminiscent of the arts of basket weaving and quilting. Interior highlights include the “History of the Dream,” a series of textile panels detailing the struggle from Reconstruction onward; a photographic exhibit featuring the “King of Soul”, Otis Redding and “The World of Imagination” artworks.

The featured exhibit is a nine-panel mural entitled, “From Africa to America” which was completed in 2009. 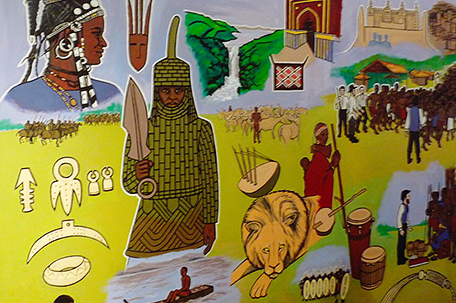 The jewel of the collection is an axe-handle, a “drumstick,” autographed by Lester Maddox. In the 1960s, he gifted them to customers of his “Whites only” Pickrick Cafeteria to beat Blacks who attempted to eat there. Maddox, a rabid segregationist, became governor in 1967. (www.tubmanmuseum.com)

The Douglass Theater, built by Macon’s first Black millionaire, was restored in 1997. The theater has its original wallpaper and molding. It was the site of the teenage talent show which Redding competed in and won 22 times. All of the top Black performers of the era played there and stayed at the Colonial Hotel above the theater. (www.douglasstheatre.org)

Bowden Golf Course was placed on the National Register of Historic Places. It was one of the first public places in Macon to integrate in 1961. (www.bowdengolfcourse.com)

The Albany Civil Rights Institute complex includes a museum, research center and the Old Mount Zion Baptist Church. The museum is entered through “colored” and “white” waiting room doors and proceeds to exhibits recounting the Albany Movement with emphasis on the story of The Lost Girls.  (www.albanycivilrightsinstitute.org)

The first Movement meetings were held in Mt. Zion on November 25, 1961. On December 15, 1961 King came to Albany to speak. His first speech was delivered at Shiloh Baptist Church. King then he crossed the street to address congregants at Mt. Zion. He made four speeches in all.

In 1944, 15-year-old Martin Luther King, Jr. participated in an oratorical competition — his first public speech — sponsored by the Colored Elks of Georgia. Martin’s speech, entitled “The Negro and the Constitution,” won.  The competition was held at the First African Baptist Church, which is located in Dublin, Georgia. Founded in 1867, the church maintains many of the original furnishings. Visitors with reservations can participate in an interactive program designed to facilitate a deeper understanding of the people and issues that were part of  the Movement. 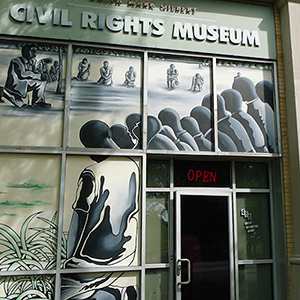 Directly across from the church is Martin Luther King, Jr. Monument Park. A mural and semicircular timeline are exhibited along with three audio boxes that allow you to access his speech and commentary. (#visitdublinga.org)

Dublin, because of its central location, was a frequent stop for activists. It is believed that the Selma March was secretly planned here in a motel owned by Hub Dudley.

Dorchester Academy is one of the few nationally noted Georgia MLK Civil Rights sites outside of Atlanta. In 1871, the American Missionary Association founded the academy for freed slaves. Andrew Young and the Southern Christian Leadership Conference (SCLC) began training activists in its Citizenship Education Program here on July 17, 1961. It was also a planning location, which King visited weekly. Most significantly Project C, the Birmingham March, was planned here. Visitors can tour the clearly marked grounds and see King’s quarters and meeting room.  (www.libertycounty.org/dorchester-academy)

Riceboro’s Historic Baptismal Trail begins nearby, where for almost a century, congregants from the nearby church were baptized outdoors at this site. Baptisms continued until the 1940s.  (www.libertycounty.org/historic-baptismal-trail) 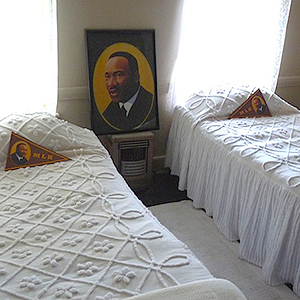 Pin Point Heritage Museum interprets the history of the isolated Gullah/Geechee community on Pin Point Island, the only remaining Black owned property on Georgia’s southeast coast. It was home to Supreme Court Justice Clarence Thomas. The museum is located inside four restored buildings in the old A.S. Varn & Son Oyster and Crab Factory. Interactive tours allow visitors to learn about the history and culture of the Gullah/Geechee people, as well as the factory that sustained them. The guided tour begins with a 35-minute orientation film.  (www.chsgeorgia.org)

Dr. Ralph Mark Gilbert, the father of Savannah’s Civil Rights Movement, gave his name to the Ralph Mark Gilbert Civil Rights Museum. The three-story building was originally a bank, but now houses 11.800-sq. ft. of exhibits that relate Savannah’s African-American history from the 1700s to the present. A highlight of the tour is an interactive segregated lunch counter that presents both the Black and White points of view. The museum also offers “The Footsteps of Savannah Tour,” which immerses you in the history by walking through the city.(www.visit-historic-savannah.com/ralph-mark-gilbert-civil-rights-museum)

The historic First African Baptist Church was the departure point for the first sit-ins. The church has its original pews, and the holes in the floor are above a hiding place for fugitive slaves.  (www.firstafricanbc.com)