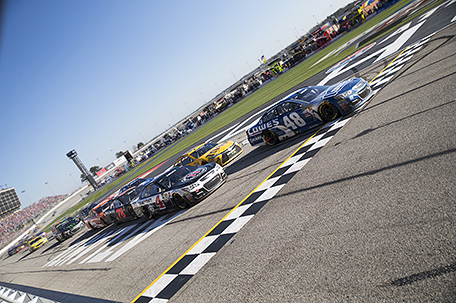 Hampton, located 26 miles south of Atlanta, has a population of less than 10,000 but receives thousands of visitors annually, who are drawn by the city’s unique sites and attractions. Seven years ago, Hampton was deemed a “Playful City,” one of under 220 in the country. The designation is granted to cities that inspire children and families to become active participants in offered events and supports these activities through scheduling, design, performances and planning. Families, couples and individuals can all have an affordable and memorable time in Hampton, Georgia. (www.visithenrycountygeorgia.com)

Bear Creek, as the city was known prior to its 1872 incorporation, was renamed after Confederate General Wade Hampton. The city’s importance was because it was the sole railroad connection in the county between 1846 and 1882. It became central to the cotton industry and the prosperity that flowed from it. The current brick depot was completed in 1881, has 17-inch thick walls and is a superb example of railroad architecture. It is listed on the National Register of Historic Places and now houses offices and a museum.

James Weldon Johnson, author of “Lift Every Voice and Sing” and NAACP leader, taught school for two summers in Hampton while he attended Atlanta University. Johnson, who was solidly middle class, interacted with rural, and in some cases poverty-stricken, Black people for the first time. He received his bachelor of arts degree in 1894.

Main Street is lined with a wide array of one-of-a-kind shops and restaurants, each worth a visit for browsing and buying. Holy Cow Leather offers handmade items in a variety of colors. Creations range from large totes to delicate earrings. Online orders are accepted. (etsy.com/shop/HolyCowLeatherGoods)

Speakeasy Bookstore is so named because it once housed a tavern and then a speakeasy in the basement with a tunnel that led across the street. In the 1870s, the tavern was moved downstairs — possibly so that Southerners could meet secretly, because by law no more than four Southerners could gather together. This book lover’s dream sells rare and first editions, as well as other used books, specialty coffee and pastries. Speakeasy Bookstore is listed on the Georgia Book Trail and visitors can book “The Walkin’ Dead” tour here. Take a selfie at Glenn Rhea’s dumpster scene spot from Season 2. (#GeorgiaFilm, facebook.com/SpeakeasyBookstore)

The mission of the Army Aviation Heritage Foundation & Flying Museum (AAHFM) is to acquire, restore and preserve — in flight ready condition — Army aviation  memorabilia dating from Vietnam to the present. Experienced volunteer veterans are largely responsible for the vintage aircraft restorations and flights. Georgia’s Legacy Chapter of the AAHFM offers hangar tours with displays of equipment and aircraft in various stages of restoration. The chapter engages in aerial demonstrations and a Bell UH-1H Huey and Bell AH-1 Cobra helicopter ride program available at presentations and at the museum. Sky Soldiers serve as ambassadors sharing a traveling educational program that connects the public to army aviation heritage.

The UH-I aircrafts have logged more than 27-million flight hours since the initial model was delivered in Vietnam in 1963 and together the Huey and Cobra helicopters have logged more combat flight hours than any other aircraft in history. They were the spine of the US Army and were used for transport, support, assault and MedEvac. Their most dangerous and important mission was evacuation of the wounded. The helicopters’ versatility — it can hover and the sound is unique –made their 60-second evac limit a possibility and saved untold lives. Book a real thrill ride. (www.armyav.org)

Prohibition resulted in a market for the clandestine production of moonshine. Making the whiskey was tricky, but night time deliveries were risky and required a fast car, great motor skills and nerves of steel to outrun the police and federal revenuers on circuitous backroads. The skills honed in the illegal whiskey trade were used for recreational races among bootleggers that developed into the National Association for Stock Car Auto Racing, modern NASCAR, in 1947. The first cars were stock — standard — but because of track conditions, NASCAR rules changed to permit alterations. (www.atlantamotorspeedway.com)

Atlanta Motor Speedway is a 1.54-mile track built in Hampton in 1959 for $18-million that attracts more than a quarter of a million people annually. The Speedway offers a huge selection of events and activities designed to engage the entire family including Thursday Thunder. This weekly race has racers as young as eight-years old competing.

The Atlanta Motor Speedway has been used for film locations of numerous movies since 2008 including “Flight,” “Need for Speed,” “Necessary Roughness,” “Anchorman 2,” “Logan Lucky” and “Black Panther.” The speedway was also notably the setting for “The Hunger Games: Catching Fire” girl on fire scene.

Track Tours transport you to the Petty Garden, suites, garages, Pit Road and Victory Lane with an added three laps around the track. The track is banked from 5 to 24-degrees. Goodyear makes specialized tires for each individual track and cars undergo a complete inspection before and after each race. More immersive activities include a NASCAR Ride Along Richard Petty Driving Experience and The Rookie Experience driving an 8-minute timed race car solo.( @atlmotorspeedway)

Finish off your Hampton tour in jail, or at least at the Jailhouse Brewing Company. Housed in a former  2-cell jail, this is the fourth production brewery in Georgia. They offer 16 specialty beers on draft; five are seasonal, and Breakout is their most popular. Guests can choose from an upstairs space or lounge on the patio and have their “mugshots” taken. Special note should be taken of the packaging. One series of cans, when placed side by side, form a courtroom mural. (www.jailhousebrewing.com)