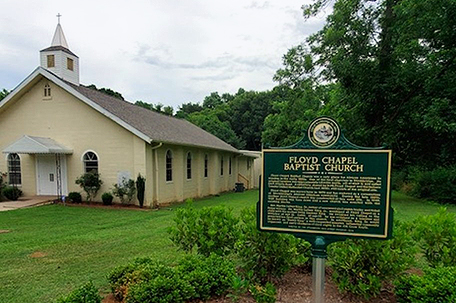 Henry County, Georgia, comprised of four major communities — Hampton, Locust Grove, McDonough, and Stockbridge — is situated 20 miles from downtown Atlanta. It was named in honor of Patrick Henry upon its creation in 1821 on land obtained through a treaty with the Creek Indians. The county was rural and heavily dependent on agriculture, until the Civil War created a railroad boom and post-Civil War impoverishment was ameliorated with a second railroad boom and the cotton industry. The economy crashed in the 1920s, recovered again during WWII and with increased accessibility and a growing Atlanta, Henry County has flourished ever since. (www.visithenrycountygeorgia.com)

Each of the four communities has a unique history and a large selection of restaurants, shopping opportunities and attractions. Many of pivotal scenes in blockbuster films and television programs have been shot in the county, including “A Madea Christmas,” “Black Panther,” “Furious 7,” “The Hunger Games: Catching Fire,” “Logan Lucky,” “Spider-Man: Homecoming,” and Season 6 of “The Walking Dead.” A self-guided walking tour is available online. (#visitHenryCoGa)

Stockbridge, founded in 1829, was relocated to its present site in 1882 to provide a railroad depot. In 2014, it became part of the Main Street Program, resulting in a historic and revitalized thoroughfare filled with eight blocks of one-of-a-kind shops and dining establishments. Empson’s Deli and Café is a great place to begin your tour with your choice of Southern classics. (www.cityofstockbridge.com)

Rev. Martin Luther King, Sr. — also known as“Daddy” King, and who was the father of Dr. Martin Luthr King, Jr. — was born in Stockbridge. The M. L. King Sr. Heritage Trail was inaugurated in 2015 in recognition of the origins of the King legacy. King Sr. was called to preach and was ordained at the age of 14 in the Floyd Chapel Baptist Church, located along the trail.

While visiting his sister in Atlanta, he stayed at the home of the minister of Ebenezer Baptist Church and his daughter Alberta, who he later married and who was the mother of King Jr. She convinced him to go to Morehouse and become a minister. A plaque in City Hall recognizing the King family contributions anchors the trail.

The Green Front Café  was constructed in 1947 and served the community, both Black and White, for over 50 years. The café is being restored. Exterior plaques retell its history.

If you need one for the road as we proceed, Drip-Thru Coffee is the place to go. This drive-thru kiosk serves specialty coffee, pastries, tea and smoothies in biodegradable containers using organically grown ingredients. Here you can really drink responsibly. (@DripThruCoffee)

McDonough, situated on the site of an Indian trading post, was founded in 1823 and named in honor of War of 1812 Commodore Thomas McDonough. The existing 1897 courthouse is on the National Register of Historic Places.

Heritage Park Veterans Museum is dedicated to relating the larger story of United States’ conflicts through the stories of  individual veterans. Tours are led by a volunteer staff of veterans who infuse their personal experience and expertise, making each visit unique. The collection consists of 20,000 donated items. Highlights of the tour include a Buffalo Soldiers display, a Vietnam bunker replica, vehicles (all functional) and a variety of armaments and uniforms. The most singular item is a seemingly unremarkable Vietnamese woven hat that, when lit inside, reveals a map. A Wall of Honor showcases deceased Georgia veterans. Free. Donations accepted. (www.heritageparkveteransmuseum.com)

The fifth generation Southern Belle Farm was a dairy farm from 1938 through1986. In 2006, it reopened as an agritourism and catering business. In 2015, a market was added. This is a premium family destination that has grown each year. Seasonal activities include “u-pick-it” fruit, a seven acre corn maze, Christmas trees sales and visits with Santa. Games, tours and their famous homemade peach cobbler and peach ice cream are available seasonally. They are true to their motto — ”We grow family traditions.” (@SouthernBelleFarmGA)

Locust Grove is believed to have been named after a grove of locust trees. The railroad arrived in 1882, and Main Street began to be built up. Today visitors can shop and dine along the street and stop at the Locust Grove Train Viewing Platform to picnic and watch the trains pass. (www.visitlocustgrove.com)

Lovin’ Oven Pizzeria, home of made to order pizzas and other signature dishes, has outdoor seating within train view. Guests can opt to sit inside and watch the pizza makers toss the dough. (@lovinovenpizzeriaoflocustgrove)

The 250-acre, non-profit Noah’s Ark Animal Sanctuary is the jewel of Locust Grove. This is a true sanctuary for more than 1,500 abused, neglected and unwanted animals in a series of natural settings with marked paths. Highlights of the 90-minute tour include a visit with “The Motley Crew” and “Baloo” the bear, the only remaining member of the famous bear, lion and tiger trio that were found together as babies and uncharacteristically remained nonaggressive mates as adults. Each animal is named and has a remarkable story. Self-guided tours are free. (@NoahsArkAnimalSanctuary)

Chef Paul Lewis owns and operates Southern Fusion Dining and it is a must! All of the dishes are a fusion of French and Southern cooking and homemade on the premises. Breakfast and lunch are served Wed.-Sun. and every dish is spectacular, but the cinnamon rolls, barbecue biscuits and shrimp and grits are mandatory. (@SFusionDining)

Nicole Silver — who has appeared on ABC’s “Great American Baking Show” and won the televised “Christmas Cookie Challenge” — owns Crumbles by Nicole in Locust Grove. Her creations are on display in the form of creative cookies, imaginative cupcakes and huge shakes. Decorating classes, parties and “Camp Crumbles” can be scheduled. (www.crumblesbynicole.com)

Locust Grove’s newest accommodations, Hampton Inn, is ideally located for a county visit and is accessible to I-75 to Atlanta. Amenities include courtesy WIFI, free parking and complimentary hot breakfast. The hotel is one-block from the Tanger Mall with more than 70 outlet stores. (www.hamptoninn3.hilton.com)