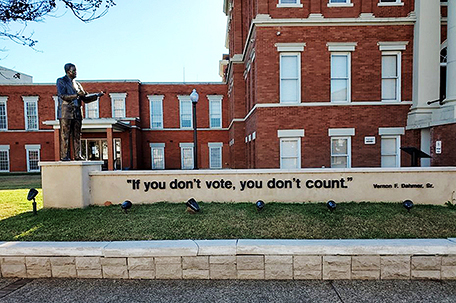 The U.S. Civil Rights Trail runs through 15 states and the District of Columbia and seeks to interpret the fight for civil rights through exploring the cities and sites along the route. Each destination is a testament to the fortitude, resolve and unwavering commitment of those, both Black and white, who engaged in the struggle. Guides and maps available throughout the trail aid in traveler’s site selections and understanding of each site’s place in the history of the movement. (www.civilrightstrail.com)

At no point did Blacks in America cease their legal battles for their rights and their freedom. One recorded case is that of John Philip in 1624. He had been baptized in England in 1612 and was declared free by the General Court of Virginia based on his religion.

After the Emancipation Proclamation, Black Americans were legally free, but state and federal laws eroded their rights. In 1896, the Supreme Court ruled in Plessy v. Ferguson that segregation was legal based on the concept that “separate but equal” upheld the 14th Amendment.

An organized Civil Rights Movement was an outgrowth of the inequality that permeated US society. It began  in the late 1940s, spurred on by returning WWII veterans, and lasted into the late 1960s.

Mississippi’s place in the Civil Rights Movement was cemented in the collective consciousness in 1955 with the murder of 14-year-old Emmett Till in Money, Mississippi. The brutality, brazenness and subsequent failure to attain justice proved to be nationally galvanizing forces. Peaceful protests for justice, equality and voting rights continued and the violent responses escalated. Phil Ochs wrote “Here’s to the State of Mississippi,” a powerful portrait of the state of the state, in 1964 after the murder of the three civil rights workers Andrew Goodman, Michael Schwerner and James Chaney in Philadelphia, Mississippi.

In 1963, after the assassination of Medgar Evers and the 16th Street Baptist Church bombing in Birmingham and murder of four little girls — Addie Mae Collins, Cynthia Wesley, Carole Robertson, and Carol Denise McNair — Nina Simone wrote what is recognized as the quintessential protest song in 1964, called “Mississippi Goddam,” and said she “meant every word of it.” The Library of Congress preserved the song on the National Registry in 2019.

Hattiesburg, once occupied by Choctaw Indians, is located in the southeastern portion of Mississippi. The city, along with the African American community of Palmers Crossing, was a significant force in the Civil Rights Movement.  In 1959, Clyde Kennard, a Korean War veteran, after completing three years at the University of Chicago, returned to Hattiesburg and applied to Mississippi Southern College.

He was denied admission and was framed for a felony to end any eligibility. He was sent to Parchman Prison and served seven years.  The NAACP mounted a campaign to win his freedom. He developed cancer and was freed in 1963 by the governor to die at home.

Vernon Dahmer was a pioneering civil rights activist focused on voting rights. He was the grandson of a white slaveholder, John Kelly, and an enslaved female. Kelly bequeathed land to his children and the Kelly Settlement became home to a community. Dahmer owned 340-acres that consisted of a cotton farm, grocery store and gristmill.

He was the president of the area NAACP, formed the Forrest County Voters League in 1963 and housed a polling center in his store. On January 10, 1966 at 2 a.m., sixteen Klansmen firebombed his home. Dahmer saved his family and was the last to evacuate. He was taken to the hospital and died an hour later. Four of the men were convicted.

In 1964, the Council of Federated Organizations (COFO) instituted a voter registration effort known as Mississippi Freedom Summer. Hattiesburg’s Freedom Summer Trail and accompanying map and audio tour leads you to 16 stops that relate the story of the state’s largest Freedom Summer area in the state. The effort included 90 out of state and 300 local volunteers and more than 650 students. Emphasis was placed on teaching history, civics and literacy. Students were drawn from all ages. (#HBURGFREEDOMTRAIL)

Highlights of the tour are the churches that often served as centers, the Dahmer Memorial and Forrest County Courthouse. The courthouse was the scene of a “perpetual picket line” beginning on Freedom Day in January 1964. The protestors’ attempts to register were augmented by clergymen from the National Council of Churches.

The African American Military History Museum is the sole surviving USO, constructed in 1942, for exclusive use by African American soldiers from Camp Shelby during World War II. The museum interprets the Black soldier’s history and service in the US through dioramas, exhibits, educational programs and special events. Memorials on the exterior highlight individual contributions. (www.hattiesburguso.com)

Oseola McCarty died at the age of 91 in 1999. McCarty was so committed to education that she — a laundress for more than 70 years with a 6th grade education — bequeathed $150,000 to Southern Mississippi for students with financial need. A scholarship bears her name. Her home has been relocated to the 6th Street Museum District. It will be renovated as a museum to reflect the look of the 1960s-70s.

The Roots of Rock ‘n’ Roll Driving Tour showcases the influence of Hattiesburg in music history. Signs and markers indicate sites. In the 1980s, Rolling Stone noted that the Graves Brothers of the Mississippi Jook Band were instrumental in introducing the “rocking and reeling” gospel-style into secular music in 1936. Resident Blind John Davis went from Hattiesburg to the international stage as a blues session pianist. (www.mississippibluestravellers.com/roots-of-rock-and-roll-hattiesburg)

Since 2016, people from the city have been officially nicknamed “Hattiesburgers.” In October 2020, the Hatties{BURGER} Trail was introduced to highlight both the nickname and the spectacular hamburger options available throughout the city. Thirty-three restaurants have been designated and are identified with markers. (#EatHBURG)

Keg and Barrel features great food served in a pub setting. Diners may choose an indoor space in a redesigned 1908 building or an outdoor patio and bar. (www.kegandbarrel.com)

Ed’s Burger Joint has a reputation for serving fresh beef on buns baked daily. It offers counter service, indoor and patio seating in a casual atmosphere. My suggestion — have a milkshake! (www.edsburgerjoint.com)

All of the sites and restaurants follow CDC guidelines. It is time to start planning your post-COVID adventures; Hattiesburg is a good place to begin. (www.visithburg.org)