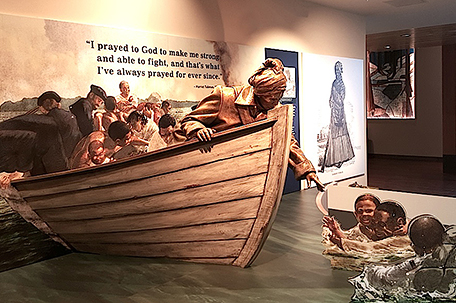 “I bring you one of the bravest and best persons on this continent.”

On March 10, the 104th anniversary of Harriet Tubman’s death,  Maryland’s Harriet Tubman Underground Railroad Visitor Center opened. She was nearly 95 years old when she died in Auburn, New York and it is her indomitable spirit, undaunted courage and more than 80 years of service that are honored and celebrated in the Center and surrounding UGRR Byway. (https://www.nps.gov/hatu/index.htm)

Araminta Ross was born enslaved in Dorchester County, the child of Benjamin Ross and Harriet Green. As a child, she caught muskrats, tended a child and completed other menial plantation tasks. When she was around 12, she was sent to a local store where she refused to help stop a runaway slave from another plantation. An overseer threw a 2-lb. lead weight at him and fractured Harriet’s skull. She was carried to her owner’s home and remained uncared for and unconscious for 2 days after which she was returned to work. For the remainder of her life she suffered from visions, vivid dreaming, epilepsy and sudden periods of unconsciousness.

In 1844, she wed John Tubman, a free man. When her owner died, Harriet feared being sold and decided to escape, but John refused to accompany her. Guided by the North Star and aided by both Black and White individuals, she reached Philadelphia where she worked as a maid for wages. She soon began trips South to liberate family members and others. In 1851, she returned for her husband, but found him remarried. She is credited with liberating 300 people and assisting hundreds of others. She brought her parents north to Auburn in the late 1850s.

During the Civil War she served as an army nurse, spy, scout and traveled for a time with Colonel Robert Gould Shaw and the 54th United States Colored Troops. In 1869, she wed Nelson Ross a former member of the USCT who had walked all the way to Auburn to join her. Congress awarded her a pension in recognition of her service. 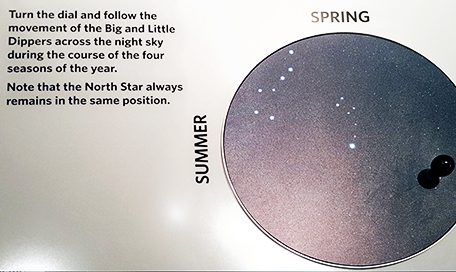 The Harriet Tubman National Historical Park in Auburn is home to three sites; the AME Zion Church, her personal residence and the Harriet Tubman Home for the Aged and Indigent African-Americans. She established the home and devoted her time and resources to it until her death. (https://www.nps.gov/hart/index.htm)

The 10,000-sq. ft., LEED certified, Visitor Center is the jewel in the crown of the 17-acre Harriet Tubman Underground Railroad State Park. The facility consists of a research library, gift shop and exhibit hall.  Your self-guided tour begins with a movie that presents an overview of Tubman’s life and the impact of the land, her slavery experience and religion on her story.

After the film, visitors are invited to walk through Tubman’s life via a series of chronological galleries. The focal point of each area is a life-sized sculpture that interprets a significant event in her life. The accompanying text provides additional context, while photographs, artworks and interactive kiosks round out this rich history. Small braille copies of the exhibits with braille text, ample seating, and spacious paths make the galleries accessible for people with disabilities. On the exterior there is a Legacy Garden, a .75-mile walking trail and 2,600-sq. ft. picnic pavilion. 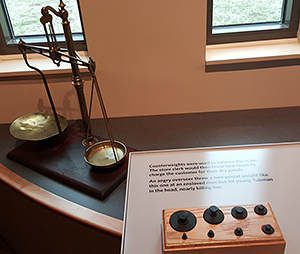 There are 45 sites along the 125-mile Tubman Underground Railroad Byway. Maryland’s Eastern Shore is filled with areas that have changed very little since Tubman’s time. Visitors can experience the natural beauty and outdoor recreation that are unique to the Eastern Shore, as well as view the region as Tubman would have seen it. The byway extends from Cambridge, Maryland to Philadelphia.

If you can’t stop at every listed site, you should choose those that best help you to understand Harriet Tubman and The UGRR. Guides are available that include complete information on each location. I have listed a few of my favorites:

Tubman’s niece and children were put up for auction on the lawn. They were spirited away and Harriet joined them in the North.

Slave ships docked and slaves were sold here until 1808.

The community established it in the 1980s and it has displays and offers tours of Tubman related sites. (www.harriettubmanorganization.org)

This a great place to view wildlife, marshes and waterways. Tubman was raised nearby and would have traveled this area. (www.fws.gov/refuge/blackwater)

There is an interpretive plaque designating this as the site of the farm on which Harriet lived until around 1823.

This is the store in which Harriet received the blow to the head. It looks much as it did then. Guided tours can be arranged and they are excellent. An outfitter on the premises rents bicycles and kayaks. If you only have time for one additional site this should be it. The store is located 5 minutes from The Harriet Tubman Underground Railroad Visitor Center.

Maryland designated March 10th as Harriet Tubman Day and that was apt for a variety of reasons, including the fact that this is Women’s History Month. Harriet is a role model for everyone. She was a woman, illiterate, disabled, poor and Black, and by any standard she should never have succeeded. She remains a woman for our time — she resisted, she persisted, she overcame.  (www.visitmaryland.org)

The Cambridge Hyatt Regency Resort and Spa is a perfect choice for accommodations for this trip. It is situated within easy access of many of the sites. The deluxe hotel features all the amenities, golf and other outdoor activities. Both Presidents George W. Bush and Barack Obama have visited the four diamond, AAA resort. (https://cambridge.regency.hyatt.com)