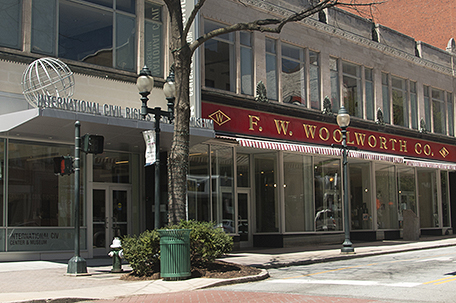 The long awaited National Museum of African American History and Culture opened in 2016, and has hosted millions of visitors in the succeeding months. It cuts a wide swath through the history of African Americans. The NMAAHC is indeed wonderful and deserving of a visit, but it is equally important to visit the smaller museums around the country that served as “keepers of the flame.” These venues have maintained this legacy by preserving artifacts, photographs, oral testimonies and documents, often in spite of limited funding and resources. Many of these museums are thematic or regionally specific, add substantially to information presented in the NMAAHC, and provide an opportunity to explore authentic sites. (https://nmaahc.si.edu).

Greensboro, North Carolina has been the location of many pivotal events in African American history. There are a number of sites that both memorialize and interpret those events. The city’s history stretches back to the earliest residents, the Cheraw and Keyauwee tribes. Nonindigenous settlers — largely Quakers, Germans, Scotch-Irish and English migrating from the North — entered the region in the 1740s. Slavery was an established practice in the colony, and by 1800 more than 25% of the population — approximately 100,000 —  was comprised of slaves. 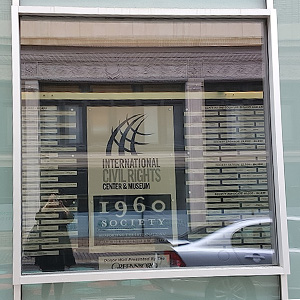 In 1808, 42-acres were purchased to establish the town of Greensborough, named in honor of Revolutionary Gen. Nathanael Greene. The Quaker religion had come out against owning slaves in 1776, and in the 1820s they began to leave because of the state’s stance on the issue. When the Civil War began, there were 361,000 slaves in the state. North Carolina seceded on May 20, 1861, the last state to do so. (www.visitgreensboronc.com).

In 1920, Governor Bickett stated, “White government shall be supreme and unchallenged.” The struggle against racial inequality and injustice was ongoing, and on February 1, 1960 four male students from North Carolina A&T University organized a protest that would change the game. At that time, Blacks could not dine-in in the downtown F. W. Woolworth. They purchased their food and carried it outside. After strategizing,  the students took seats at the counter, requested service and refused to move until served. The protest became a daily event, until Blacks were finally served on July 25, 1960. It was not until 1963 that all of Greensboro’s public venues were desegregated. Sit-ins as a form of protest rapidly spread to 54 additional cities. In 1993, the city’s Woolworth closed. The four original protestors were present, and ate a final meal at the counter with a menu and pricing from 1960. 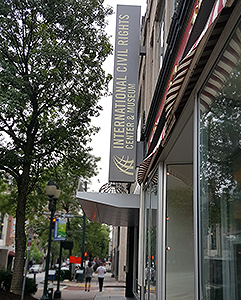 On the 50th anniversary of the sit-in at Woolworth’s, February 1, 2010, the International Civil Rights Center and Museum (ICRCM) opened displaying the original black counter and red and green metal stools in their original location as the central exhibit. The 3-story, 17 exhibits museum preserves much of the 1929 Art-deco building, including the stairs. The tan tiles on the floor indicate the area of the original store, grey tiles mark the sections that were once adjacent shops.

Guided tours are offered and begin with an introduction to the realities of the Declaration of Independence, followed by a short video. The 90-minute tour recounts African-American life from Reconstruction through Jim Crow segregation, and the Civil Rights Movement, culminating with a display of former President Barack Obama.

Displays include videos, artifacts, memorabilia, documents, dioramas, interactive stations and photographs. Highlights of the collection are not limited to an authentic Klan robe, a traveler’s Green Guide, a segregated Coca Cola machine and the lunch counter exhibit. There is a replica of a room in A&T’s Scott Hall similar to that used by the four students to meet and plan the protest and visitors stand in front of the counter and become part of the protest via a life-sized video.

The museum’s gift shop has more than your usual souvenirs. The books and tee shirts are informative and in many cases unique.(www.sitinmovement.org)

February 1st Place is adjacent to the museum, and was the site of the entrance the four men used. The bronze footprints of the four are imbedded in the pavement around the venue. The Walkway of History is located on February 1st Place. Another plaque found there honors the Underground Railroad and Levi Coffin, an area Quaker who moved to Indiana in 1824 to establish an UGRR station. He is remembered as the “President of the Undergroud Railroad.” 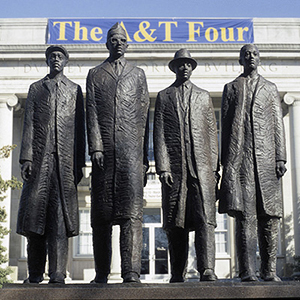 Greensboro’s first Heritage Community was established in 1867 by Pennsylvania Quaker, Yardley Warner, and was sponsored by The Association of Friends of Philadelphia and Its Vicinity for the Relief of Colored Freedmen. The 35.5-acre planned African-American community was named Warnersville for Yardley, who lived among them and established a school and a church there. Union Cemetery, where many residents are interred, is on the National Register.

President Obama paid tribute to Greensboro in 2008. He acknowledged Greensboro’s significance. You should too. (www.visitnc.com)

Travel is becoming increasingly more stressful, but there are a number of gadgets that can reduce your anxiety level. These items make for smooth travels.

The PillSuite is a must for those taking medication or vitamins on the road. It sorts, funnels, seals and labels your dosage for prepackaging allowing you to carry the amount you need in purse or pocket. The kit comes with 400 biodegradable suites and a sealer. (https://www.pillsuite.com).

RapidX, a front and rear seat charger, is IOS and Android compatible. The device includes five USB ports and a 5-ft. cable. It is great for family road trips. (https://www.thegrommet.com/rapidx-x5-car-charger-with-5-usb-ports).

The digital OAXIS AirScaleweighs luggage and charges — at a superfast rate — your devices at the same time. The AirScale is portable, has a numeric light display, rapid charge power bank, detachable strap, and can weigh bags up to 88 lbs. (https://shop.oaxis.com/products/airscale-power-bank-with-digital-scale).