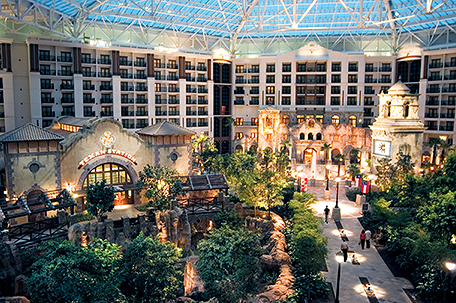 “They loved their career and gave their best, Now joining those ‘heading west’.”

Grapevine is one of the oldest settlements in Texas, and as such its sites and attractions chronicle the state’s history in a unique way. Simultaneously the city manages to be thoroughly modern with more than 200 restaurants and 20 hotels designed to fit every taste and budget. Grapevine is located a few miles from Dallas Forth Worth Airport (DFW) entrance and is a great destination, hub for travel throughout the state or day trip from the airport. Organized tours are available from DFW that are a perfect adventure during a layover. (www.GrapevineTexasUSA.com) 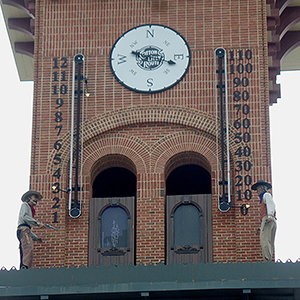 In 1843, Sam Houston led a group to Tah-Wah-Karro Creek, Grape Vine Springs, to open the Texas frontier for US settlers. Ten regional indigenous nations met and signed a treaty. Homesteaders immediately poured into the area, largely from the southern states, bringing their slaves with them. Grape Vine was established the next year and named after the wild grapes that grew there.

One of the first sites visitors see is the 9/11 Flight Attendants Memorial, dedicated on July 4, 2008. Dean Thompson sculpted the bronze tableau that consists of five figures, two pilots, two flight attendants and a child clutching a teddy bear. The 14-ft. figures represent the 33 crew members who lost their lives on 9/11. The 12-ft., white Texas limestone, base faces west with the crew’s names etched around it. The flights involved were American Airline  Flights 11 and 77 and United Flights 93 and 175. The memorial is situated so that it can be seen by DFW flights.

Grapevine’s Main Street is a National Registered Historic District and the six block street has more than 60 sites of architectural and historic importance. Many of the structures date from the early 1900s when brick buildings were erected in place of existing wooden ones. Highlights of the self-guided tour are the 1888 building that was once a bank robbed by Bonnie and Clyde and the Great American West Gallery that exhibits more than $1-million in western art. (www.greatamericanwestgallery.com)

There is debate about Bonnie and Clyde’s participation in the bank robbery but there is no doubt about the events on Easter, April, 1934. Bonnie’s mother lived in Dallas, and the gang drove through the area often. On this Sunday, they parked their car, reasons are unclear, and were approached by two troopers. They killed both men. The Wheeler-Murphy Monument has been placed at the site. 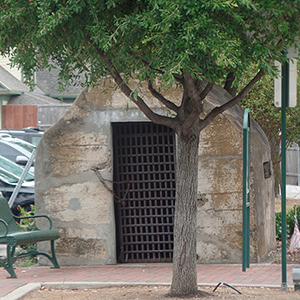 The relocated Grapevine Calaboose — Spanish for dungeon — is located on Main Street and was in use from 1909 until the 1950s. This one-room, stone jail was used for overnight incarceration until felons could be transported to a larger facility. Members of Clyde’s gang were held here. It is considered the best-preserved original “calabozo” in the nation.

Grapevine’s shiniest gem is its 75-ft. tall Glockenspiel clock tower over the Convention and Visitors Bureau. Twice daily, two 9-ft. cowboys exit the doors and reenact Nat Barrett and Willy Majors’ train robbery and gunfight complete with animation and dialog. Computers select the winner. Best views are obtained from a viewing plaza across the street.

The railroad came to Grapevine at the end of the 19th-century and the spirit of that experience continues with rides aboard the Grapevine Vintage Railroad on the Cotton Belt Route. An 1896 steam locomotive is one of two vintage locomotives that pull the Victorian coaches. Special events, wine tours and rentals are regularly scheduled. (www.grapevinetexasusa.com/grapevine-vintage-railroad) 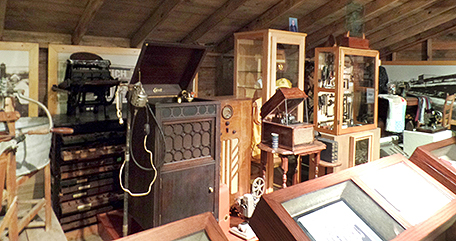 The Settlement to City Museums  complex consists of three facilities that interpret individual aspects of Grapevine history and culture. Inside the 1888 Keeling House — a museum — through a series of dioramas, artifacts and memorabilia, displays the city’s story from pioneer to present. The 1900 Donald Schoolhouse portrays the story of education on the prairie.  A 1910 house is the site of the Grapevine Cotton Ginner’s Museum. Texas cotton was once an important crop and the museum tells its story with both hands-on and static exhibits. (www.Grapevinemuseums.org)

Gaylord Texan Resort is a clear choice for any visit to Grapevine. Situated on Grapevine Lake, the hotel offers luxurious accommodations and nearly 5-acres of indoor gardens and water features. Guestrooms offer a full menu of amenities and guests can avail themselves of a world-class fitness center and the services at the on-site Relâche Spa & Salon. The Gaylord is a destination hotel and they are renowned for their spectacular holiday decorations and presentations including “Lone Star Christmas.” Highlights of the Christmas season are more than 2-million lights and the “On the Blocks” ice bar for guests 21 and older. (www.marriott.com/hotels/travel/dalgt-gaylord-texan-resort-and-convention-center)

Grapevine was named a “World Festival & Event City” in 2012. The city puts on events, fairs shows, parades and festivals throughout the year and 40 days at year’s end it is known as the Christmas Capital of Texas hosting more than 1-million visitors.

Do not leave the area before stopping at Tolbert’s, 423 S Main St, Grapevine, Texas 76051 for a bowl of their award-winning chili. For 50 years, this restaurant has been wowing locals and visitors alike.