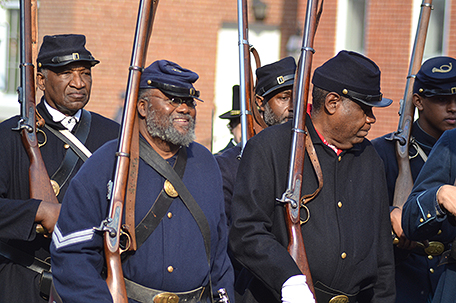 “ Our defense is in the preservation of the spirit which prizes liberty as the heritage of all men, in all lands, every where. Destroy this spirit, and you have planted the seeds of despotism around your own doors.” –

Gettysburg has come to be defined by the July 1-3, 1863 Battle of Gettysburg and the Gettysburg Address given by Lincoln on November 19, 1863 to dedicate the newly established Soldiers’ National Cemetery. Tours, sites and attractions that illuminate every aspect of those events abound but Gettysburg has other, often overlooked, jewels in its crown. www.destinationgettysburg

The city is located in the heart of the state’s farm country and dining experiences here are crafted around fresh locally sourced ingredients and this is the heart of Pennsylvania’s fruit belt and is known as “Apple Country.” The sheer number of dining venues can be overwhelming and paired with a trip along the Gettysburg Wine & Fruit Trail, with more than 20 wineries and a numerous orchards, it’s a foodie’s delight.

A significant number of restaurants are located inside historic structures, 60 percent of the city’s buildings remain from the 1860s, and they are a must visit. The 1776 Dobbin House looms large in city, battle, architectural and African-American history. A station on the underground railroad, the escapees hiding place can be viewed on a tour. The Dobbin House complex also consists of the Springhouse Tavern, a B&B, Curiosity Store and Abigail Adams Ballroom. Costumed servers enhance the historic ambience of the candlelit dinners in the tavern. Dobbin House is listed on the National Register and has been featured in many publications and on television programs. Reservations are highly recommended. www.dobbinhouse.com

The Dobbin House is one of Gettysburg’s “spirited” sites in what has been named by CNN as one of the most haunted places in the nation. More than 7,000 men were killed during the battle and it appears many linger in the area. Additional programs on SyFy, the Travel Channel and A&E have also highlighted it. Uniquely, many of the haunted locations are in use and may be visited on your own or visitors can embark on a guided ghost tour. 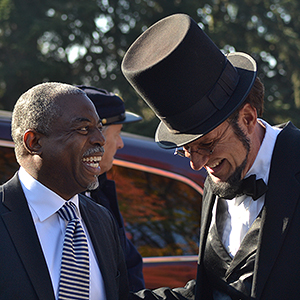 Annually Gettysburg honors the dedication of the cemetery and the delivery of the Gettysburg Address. This year on November 19th LeVar Burton was the keynote speaker. The ceremony takes place near the original site and highlights include the address given by the premiere Lincoln interpreter and the swearing in of 16 new American citizens who have immigrated from around the world. This year’s 153rd Remembrance Day Parade, from downtown to Gettysburg National Military Park, follows the ceremony. The day’s celebrations culminate with the Annual Remembrance Illumination featuring the reading of the names of the slain soldiers and the lighting of 3,512 luminary candles atop the Civil War military graves.

Gettysburg National Military Park is the area’s biggest attraction and the average visit consists of three parts, a 20-minute orientation film, the Cyclorama, self-guided museum visit and Battlefield Tour. “A New Birth of Freedom,” narrated by Morgan Freeman, provides an overview of the battle that aids in understanding the events and significance of the battle. The Cyclorama is a 377’ long, 42’ high, circular painting by Paul Philippoteaux of the battle’s final day and Pickett’s Charge. The sound and light presentation was completed in 1884. www.gettysburgfoundation.org

The Museum is arranged chronologically and interprets the Civil War from the causes to the aftermath. The story is told through dioramas, films, interactive kiosks, displays and artifacts representing both sides of the conflict. 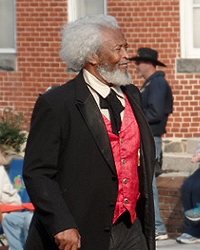 Battlefield tours can be self-guided or accompanied by a licensed personal guide. No matter how you take the tour it is awesome. The first battlefield monument, a marble urn was dedicated to the 1st Minnesota Infantry and in 1869 the first Confederate regimental monument was dedicated to the 2nd Maryland Infantry in 1886. Monuments are generally erected at the center of the honored unit’s lines. Gradually state’s constructed monuments and The Pennsylvania Memorial is both one of the most beautiful and the sole one to list all of the state’s soldiers who fought in the battle. Today there are more than 1,300 monuments and 148 historic structures. A semicircular monument to Lincoln and the Gettysburg Address is located within the cemetery. www.nps.gov/gett

A guide for the Abraham Lincoln Walking Tour is available. The tour consists of the five most important locations connected with Lincoln’s November 1863 visit and a free shuttle to the sites is available from the Gettysburg National Park Visitor Center. The David Wills House is arguably the most significant stop. It is here that Lincoln spent the night prior to the dedication. There are displays on the first floor and Lincoln’s bedroom on the second floor. Research now points to the fact that Lincoln wrote part of his speech in Washington DC on the 17th and part of the speech in this room on the 18th. It is now believed he did not write the speech on the train to the city. Just outside the house is a bronze statue of Lincoln greeting a tourist, a great place for a photo op.

Any season is the right time to make your destination Gettysburg. It is ideal as a daytrip from Philadelphia and perfect for a weekend. Currently the fall colors provide a framework and holiday activities begin in earnest on November 25th with the lighting of the Christmas tree. Gettysburg’s quaint streets are lined with shops that offer all manner of gifts and wonderful antiques. There are also candle lit tours of historic homes and holiday productions.

Gettysburg Comfort Suites Hotel is a great choice for your stay. It is situated within walking distance of the park and less than ½-mile from the historic district. All of the standard amenities are offered as well as microwaves and refrigerators. A bountiful breakfast is included as are complimentary parking and WIFI. www.gettysburgcomfortsuites.com

Edward Everett was the main speaker at the Dedication Ceremony. He spoke for two hours. Lincoln’s speech was two minutes long and he stated, ”the world will little note nor, long remember what we say here”. Visit Gettysburg and see how wrong he was. #GettysburgNews