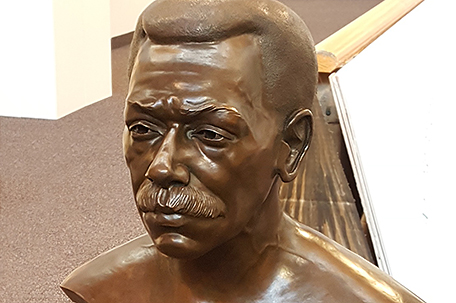 ABOVE PHOTO:  Bust of Larry Hamlin

People tend to think that African-American theater developed after their introduction to European forms of entertainment and cultural influences. Research hints at the exact opposite. Herodotus, considered the “Father of History,” visited Egypt in 450 BC and noted the historic use of performances in rituals, religions, ceremonies and festivals. It is this pattern that traveled to Europe. The earliest documented evidence of an Egyptian theatrical performance is the 2600 BCE Ramesseum Dramatic Papyrus that includes information on the script and the scenes.

Theater was the perfect mechanism through which culture, religion and history could be preserved and passed on. It is oral, dramatic and easily adapts to the inclusion of song and dance. It can also be used as a nonthreatening vehicle to convey ideas, provoke discourse, protest, satirize and entertain. It has maintained its importance in the Black community and in Winston-Salem in 1989 Larry Leon Hamlin dedicated himself to creating a festival to showcase, promote and honor the best of American Black theater. He joined with Oprah Winfrey to establish the first festival and it has been held biennially since then.

The National Black Theater Festival (NBTF) has grown to include more than 50 performances, an award ceremony and gala, comedy shows, workshops, seminars, International Vendor’s Market, celebrity interactions and cultural tours. Additionally, a National Black Theater Hall of Fame & Museum is planned. The next festival will be held in 2019 but it is never too early to plan. (www.facebook.com/National-Black-Theatre-Festival). 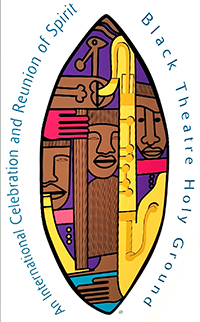 Winston-Salem is a cultural mecca and has outstanding accommodations, dining and entertainment venues, historic sites and unique museums. It is compact enough to walk to most destinations but large enough to be cosmopolitan with a big dollop of southern hospitality. (www.visitwinstonsalem.com).

The Diggs Gallery at Winston-Salem State University is one of the 10 best African-American galleries in the US. It also boasts an outdoor sculpture garden and two stunning murals by John Biggers. (www.wssu.edu/diggs).

In 1972 the Delta Fine Arts Center was founded by a chapter of Delta Sigma Theta Sorority Inc. It showcases the art and material culture of the delta region. (Deltaartscenter.org)

Sawtooth School of Visual Arts is a community art school, in what was the Hanes Factory, holds classes and workshops in a wide spectrum of creative arts. Programs encompass all skill and age levels. A variety of exhibitions are held and the gift shop offers superb area crafted objects. Currently they are hosting the NBTF Hall of Fame Pop-Up Exhibit. (www.sawtooth.org).

Old Salem was always noted for its industry and creativity. Moravians established the town in 1766 and many of the structures remain. A walking tour includes 14 stops and the gardens. Specialized African American Heritage tours are offered that interpret the lives of free and enslaved Black people within the community with emphasis on the African Moravian congregation. Stops include St. Philips African Moravian Church and MESDA, the Museum of Southern Decorative Arts. Many of the sidewalks in Old Salem were constructed from bricks made by George Black, the son of former slaves. He made his bricks in a shop behind his home even after brickmaking became mechanized. A sculpture of Black is on view downtown. (www.oldsalem.org).

MESDA exhibits decorative arts from the years 1660-1860. Visitors can request a legacy of African American influences tour that takes you through otherwise inaccessible galleries. Exhibits feature portraits by Joshua Johnson, first Black portraitist in American art history, works by James Woodward, Abraham the silversmith and furniture by Thomas Day. Day was born free in 1801 and by 1850 owned the largest furniture business in NC. A signed jar by Day is also on display. The museum also displays the original lower floor of the home of Harriet Jacobs with the staircase her owner threw her down for refusing his advances.

The art of eating and drinking is taken to creative heights in Winston-Salem. There are several Moravian food trails and a variety of venues in the downtown area.

Black Mountain Chocolate was founded in 2007. It offers guided tours, samples and is the winner of the “Best in NC” or its chocolate chip cookies. (www.BlackMountainChocolate.com).

Carolina’s Vineyards & Hops was the first vineyard in the state to sell exclusively wine, beer and cheese from within 150-miles. They offer a tasting lounge and private event space. (www.carolinasvineyardsandhops.com).

Mary’s Gourmet Diner, the city’s first farm to table restaurant, is a Winston-Salem favorite for breakfast. All dishes are made from local, fresh ingredients and prepared when you order. (www.breakfastofcourse.com). 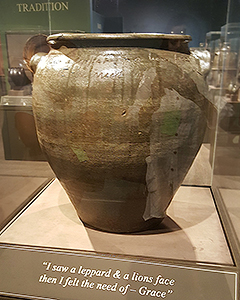 There are three black-owned restaurants in the downtown area. They are affordable and are all worth a visit.

Meta’s Restaurant was the first Black-owned, soul food, restaurant in the area. Guests are served buffet-style, portions are large and the atmosphere is homey.

Vivián Joiner and Chef Stephanie Tyson established Miss Ora’s Kitchen, a casual restaurant and carryout venue, next door to their first restaurant, Sweet Potatoes. The menu is limited, but no less delicious. (www.missoraskitchen.com).

While visiting you can stay historic. The 2016 Winston-Salem Kimpton Cardinal Hotel is a 1929 Art Deco building that was owned by Reynolds Tobacco Company and was the prototype for the Empire State Building. The 174-room hotel also offers an adult rec room with basketball court and bowling alley. The onsite restaurant, Katherine Brasserie & Bar, features French cuisine. This boutique hotel is ideally situated for activities in the Downtown area. (Thecardinalhotel.com).

In the 1930s, Bowman Gray, President of Reynolds Tobacco Company, built an 87-acre, 60-room mansion. Graylyn is now the sole luxury boutique hotel and conference center in the region. The historic accommodations are elegant with modern touches and designer linens and amenities. The Graylyn has hosted, among others, Presidents Jimmy Carter and Gerald Ford and Oprah Winfrey and Maya Angelou.

Executive Chef Greg Rollins presides over Graylyn Estate dining. Menu options are seasonal and based upon availability of local and Fair Trade products. My personal favorite is the scallops and grits with gastrique and sauce white cheddar. (www.graylyn.com).

Take a walk on the artsy side. Visit Winston-Salem!