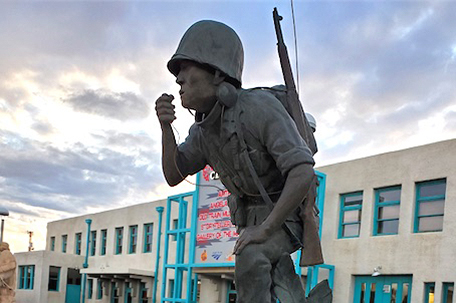 A postal clerk once told me that I needed to pay international postage to mail a letter to New Mexico. She was surprised, as many people are, to learn that it gained statehood in 1912, has a documented history that spans thousands of years and is literally a microcosm of southwestern history. It benefits from the unique characteristic of featuring tangible sites and offering immersive activities that bring the history, arts and events to life in fresh and exciting ways. (www.newmexico.org)

Gallup, New Mexico is the perfect place to begin your explorations because it has been at the heart of the culture, even prior to European contact. Of the approximate 22,500 population,   54% are Native American and the blending of cultures, religions and ethnicities has resulted in a tolerant and welcoming atmosphere. The city is LGBTQ friendly and is the home of the University of New Mexico’s LGBTQ Resource Center.

Gallup is recognized as the “Native American Capitol of the World” and the “Gateway to the Native American Experience.” It is surrounded by the Navajo Nation, is the size of West Virginia and close to the Zuni and Hopi reservations.

The 662.4-mile Trail of the Ancients Scenic Byway, known to be in use in 850 AD, runs through Gallup and takes visitors to ancient ruins, sacred sites and unique landscapes that served as Western movie sets. Chaco Cultural National Historic Park, a 1987 UNESCO World Heritage site, is a mere 2-hour drive. This ancient pueblo functioned as a ceremonial center  for 400 years. Other significant pre-Columbian ruins are even closer.

Zuni Pueblo (Hawikuh), 37-miles from Gallup, is believed to have been one of the Seven Cities of Gold sought by the Spanish. It was here that Estevanico, a “negro” man and the first nonnative to reach Arizona and New Mexico was killed as a spy by the Zuni in May 1539. Of the 19 New Mexican Pueblos, Zuni is the largest. A variety of tours of are offered. (www.zunitourism.com)

In 1880, David Gallup established a pay station near a stage stop for the Atlantic and Pacific Railroad workers in the area. Workers were “going to Gallup” to collect their earnings and in 1881 the town was founded and named after Gallup. More than 100 freight and passenger trains continue to pass through daily.

The Gallup Cultural Center is situated on the 2nd-floor of the Santa Fe Depot. The station was revamped to look like the 1918 El Navajo Hotel, which was once a nearby Harvey Hotel. Displays in the museum showcase Native American art, artifacts, kachinas and provide a comprehensive overview of regional history. A gallery is devoted to WWII’s Navajo Code Talkers and a 10-ft. sculpture of a code talker at the entrance depicts him in action. This is the station from which the first 29 men departed for service. There is a gift shop and café. (www.southwestindian.com/service/center.cfm)

Coal was discovered in 1885 and the town grew rapidly. A series of ghost towns, once coal mining camps within a 10-mile radius,  dot the area around the city as a result of the end of the coal era. The Rex Museum, a former brothel, interprets the history of the area mining and coal industries.

Route 66 was commissioned in 1926 and rapidly became America’s “Mother Road”. It is the spine of Gallup and new constructions and glimpses of historic attractions continue to lure travelers. The Rico Auto Complex was established in the 1920s and, in addition to being a functioning dealership, items on display relate the history of Route 66. Handmade, antique, rugs are displayed and a buggy that once belonged to the President of the Navajo Nation are featured in the showroom. (www.ricoautocomplex.com)

Gallup is known as the “America’s Most Patriotic Small Town” and in keeping with its designation the hotel features a moving Veterans Museum in the lobby. Korean War Medal of Honor Recipient Hiroshi “Hershey” Miyamura, featured in Netflix’s “Medal of Honor”, is highlighted.  (www.choicehotels.com/ComfortSuites/Gallup)

In 1937, R. Griffith built the El Rancho Hotel and it was the hotel of choice for stars filming nearby. The public spaces are filled with memorabilia and regional arts. Take a self-guided tour of the premises including the stained glass window tableaus. (www.elranchohotel.com)

Carl Boller designed the 1928 historic El Morro Theater. In 2015, after restoration, it reopened as a movie theater and performance center. Many of the architectural elements are original and tours are available. (www.elmorrotheatre.com)

McKinley Courthouse Square is the site of the Veteran’s Pillars inscribed with the names of  local veterans who served from WWI onward. There are individual pillars honoring the Bataan Veterans, the Navajo Code Talkers and Congressional Medal of Honor recipient Hiroshi “Hershey” Miyamura.

Free nightly Indian Dances are performed  from Labor Day to Memorial Day in the Plaza from 7PM to 8PM. The traditional dances and are accompanied by explanations of the attire and traditions and an opportunity to participate. Many of the dances were banned until the 1930s.

Gallup has a variety of dining options and Sammy C’s Rock ‘n’ Sports Pub & Grille should be on your list.  CNN named it one of the “101 Best Sports Bars in the U.S”. The burgers are noteworthy and the music and ambiance notable. (www.sammycsgallup.com)

If you are a Southwest traditionalist Virgie’s is the place for you. The dish to order is the enchilada, taco, tamale and burrito combination plate. This is a local favorite.

Earl’s Family Restaurant has been a staple since 1947. The signature dishes here are the Navajo taco and the smothered steak burrito. It is customary for native craftsmen sell their wares at your table. You can shop and dine at the same time.

Immerse yourself in all things Southwestern in Gallup, New Mexico.  (www.galluprealtrue.com)

This month a travel information website created by members of the Navajo Nation has launched. It will focus on the culture, arts, ceremonies and destinations within Navajo Land from the perspective of tribal members. Practical tips on scheduling, safety and protocol are included.  (TravelNavajoOnline.com)