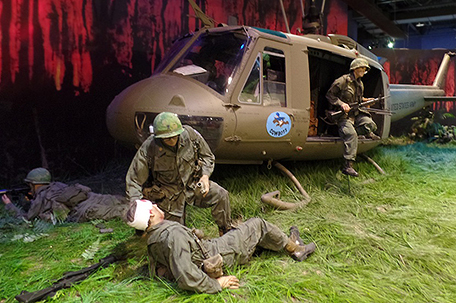 Fayetteville, North Carolina owes its founding to its prime location. The site was once where a series of Native American paths met, and because early roads usually followed established Indian paths, the hub of five plank roads and subsequently is where all of the state’s major roads converged. In 1783, two colonial villages combined and the North Carolina General Assembly named the town Fayetteville in honor of the Marquis de Lafayette. It was the first city to be named after him and the only one he visited personally. When he visited in March of 1825, the townspeople realized they would need a translator. They searched and found that the only person in town who spoke fluent French was an Antiguan slave. She acted as translator and is noted in the town’s history as French Mary. Visitors can follow the Lafayette Cultural Heritage Trail to follow his route. (https://www.visitnc.com).

The 2-story, restored 1890 Romanesque Revival, Fayetteville Area Transportation and Local History Museum is the place to begin a tour of the city. Displays relate regional history from a 1,500-year old dugout canoe, through European arrival and the Civil War, to the present. An exhibition highlight is a replicated railroad Station Agent’s Office.

In 1789, North Carolina ratified the Constitution in the State House and Lafayette addressed the crowd there in 1825. An 1831 fire made it necessary to replace the first State House with the existing Market House. It was constructed with an open-air market with nine individual stalls below and government spaces above. Goods and slaves were sold there and at least one free black operated a stall. On March 11, 1865, Sherman announced the emancipation order there. 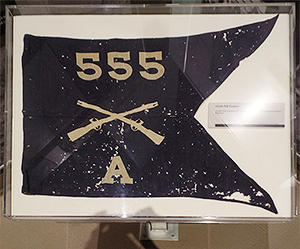 Second floor exhibits include information on the Fayetteville African-Americans Hiram Revels (1822-1901), first African-American to serve in Congress, and Charles Chestnutt (1858-1932), teacher, lawyer and novelist. Chestnutt was a prominent author of his era and many of his works feature places in Fayetteville. Visitors can follow a self-guided Charles Chestnutt Trail. Other Blacks noted on historical markers in the area are Lewis Leary (1835 -59), abolitionist and John Brown’s co-conspirator and Omar Ibn Said (1770-1863), an African Muslim scholar and slave who wrote his autobiography in Arabic in 1831.

On March 11, 1865, Sherman arrived and there were skirmishes around the Market House prior to Fayetteville’s surrender. He burned the Arsenal and the Fayetteville Observer, an important Confederate newspaper. From here, Sherman went on to fight the Battle of Bentonville from March 19-21, 1865, the largest Civil War land combat in the state. Bodies were buried in mass graves on battlefield. (www.nchistoricsites.org/bentonvi/).

Fort Bragg, named for Gen. Braxton Bragg, is a 300-sq-mile military base established in 1918. In 1942 Bragg was designated the home of the 82nd and 101st Airborne Divisions. The Visitor Center is located at the All American Freeway Gate and the Airborne’s weekly jump schedule is available. Contact them for information on visiting hours and admission criteria. (www.militarybases.us/army/fort-bragg).

The 82nd Division was established in 1917 in Georgia and because its ranks consisted of men from the then 48 states it became known as the “All-Americans”. The division was demobilized in March of 1942 and renamed the 82nd Airborne. They were active in Italy, Normandy and Berlin. In 1946, they were the first division to integrate Black soldiers into a White unit when the 555th Parachute Infantry Battalion — the army’s sole Black paratrooper outfit — was disbanded and became part of the 82nd. (www.asomf.org).

The Airborne and Special Operations Museum is located on Bragg Boulevard. This outstanding museum consists of a main and temporary galleries, 4-story theater and motion simulator ride. Tours are self-guided and interpret Airborne and Special Operations history from 1940 to the present. The museum is free and an extraordinary touch is the special greeting every Vietnam vet receives as they enter. Staff members thank each veteran for their service in a small ceremony. You must make them aware of the individuals’ status prior to visiting. A tour highlight is a ride that provides the experience of a parachute jump as you pitch, roll and yaw in a motion simulator. 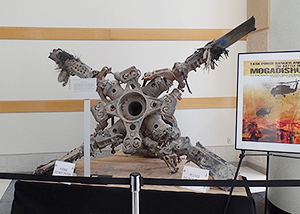 The lobby displays include a WWII, round, parachute and modern rectangular one. A portion of a helicopter used in Mogadishu, depicted in Black Hawk Down, is also on exhibit. The main exhibit tour is chronological and includes life-sized dioramas. Two of the most interesting exhibits are about the Filthy 13 and the Triple Nickels. “The Dirty Dozen” was based on the real-life Filthy 13. They were not prisoners, but men who were unorthodox in their approach to military service. They were forged into an elite, fearless, saboteur demolition team and their exploits make The Dozen look tame.

The Triple Nickels were the first all Black Parachute Infantry Battalion. They were never given orders for service in Europe, but were instead the first smokejumpers. In 1944, the Japanese were sending balloon bombs across the Pacific Ocean on jet stream currents to start fires in the Pacific Northwest. The Triple Nickels were the troops who parachuted in and located the devices and contained the fires. (www.triplenickle.com/history.htm).

Two outdoor exhibits enhance your visit. Constant Vigilance — better known as Iron Mike — stands on rocks from 1st Airborne training jumps. The WWII paratrooper has the stance of one who has just completed a jump and remains watchful and alert. Further along the path sits the Special Operations K9 Dog Memorial dedicated to K9s killed in action. The sculpture is of a fully equipped Belgian Malinois.

Adjacent to the museum is NC Veteran’s Park, the first state park dedicated to military veterans. The park is interactive story garden where you can hear personal stories and several thematic areas. The Visitors Center features the Missing Man Table, a table set to honor those veterans who gave everything. During Hurricane Matthew, the center was flooded and badly damaged. The Missing Man Table remained somehow untouched. Even the glasses and vase were not tipped over. (www.ncveteranspark.org).

Fayetteville is an international city and you can hear global tales if you follow the International Cuisine trail. (www.fayettevillenctrails.com).

Make your next vacation a storied one. (www.visitfayettevillenc.com).