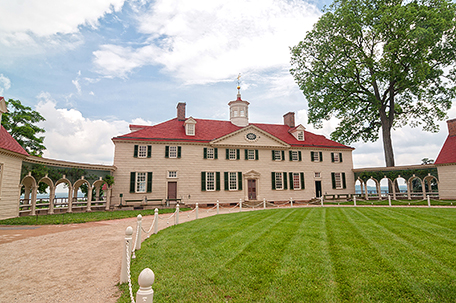 When the first Europeans arrived in the region of Fairfax County, Virginia in 1608, the land had been inhabited for thousands of years by Native Americans. The Doeg, the largest tribe in the area, lived in three villages in what is now Fairfax. They farmed and fished. By the end of the 1600s, they had either migrated or died of disease or war. (@VisitFairfax)

In 1649, Charles II of England was exiled, but awarded the land of  seven loyalists in Virginia. The Fairfax family came into the land by 1690, and in 1745 their ownership of 5,282,000 acres was officially recognized. Fairfax County was created in 1742 and thrived on raising tobacco with the extensive use of Black slave labor. By 1749, slaves made up 28% of the population and in 33 years, the percentage had grown to 41%.

The county was named in honor of Thomas, the 6th Lord of Fairfax. He moved from England to Virginia in 1742 and hired a teenaged George Washington to survey his land. Washington moved to Mount Vernon to live with his half-brother. Lord Fairfax became a slave trader and owned 30 plantations scattered throughout 9,000 acres, with hundreds of enslaved workers.

The 1759 Gunston Hall became the home of George Mason, who was a founding father, delegate to the Constitutional Convention, writer of the Virginia Constitution and the Virginia Declaration of Rights. He was also one of the three men to refuse to sign the Constitution because of its failure to protect individual rights. Ironically, Mason vocally expounded upon the evils of slavery, but held the second largest number of enslaved workers in Northern Virginia. Mason mentioned 36 slaves in his will, yet failed to free any.

An 11-minute orientation film and museum are inside the Visitor’s Center. The “Revolutionary Rights” exhibit interprets Mason’s influence. “A Woman’s Place” explores the lives of Gunston Hall’s free and enslaved females. Exterior tours of the 1700s Riverside Garden restoration and dependencies are offered as well as guided tours of the Georgian mansion that showcase the phenomenal interior designs featuring chinoiserie, high Palladian and French rococo architecture. (www. gunstonhall.org)

Washington rented Mount Vernon in 1754 upon the death of his brother Lawrence and inherited the estate in 1761 upon the death of Lawrence’s wife. Ultimately he expanded the mansion, adding a floor to the 1 1/2 –story structure, with 21-rooms and an 11,028 square footprint. The plantation was divided into four agricultural farms and Mansion Farm, which included the area immediately surrounding the house.

Mount Vernon is the most visited historic home in America and tours of the first floor are offered. Highlights of the tour are personal items, furnishings, portraits and the key to the Bastille gifted to Washington by Lafayette. (https://virtualtour.mountvernon.org)

In 1761, 2,000 slaves worked at Mount Vernon. At Washington’s death, there were almost 8,000, 316 which he owned personally. Brick slave quarters were added in 1793 at Mansion House. Each had a fireplace and glazed windows. Self-guided tours reveal how these, largely skilled, enslaved people lived. A cemetery slave memorial is also on the same grounds as Washington’s Tomb.

Prior to the tour you should visit the museum and education center. The 23 galleries and theaters present interactive exhibits, films, artifacts and original objects, including a set of Washington’s famous dentures. Current special exhibits include  “Be Washington,” the 4-D Revolutionary War Theater and “Lives Bound Together,” an interpretation of the institution of slavery, the life of Mount Vernon’s enslaved and Washington’s views on slavery. (#mountvernon)

When Mount Vernon opened for tours in 1858, travelers were served refreshments because the estate was so far from any other dining facilities. Today, the adjacent Mount Vernon Inn serves excellent Colonial American fare with an 18th-century vibe. The “do not miss dish”  here is peanut soup.

George Washington owned a Distillery & Gristmill. A white farmer and several enslaved males operated the three-story, 1771 mill. It is reconstructed to the era and fully functional.

The reconstructed distillery was the largest in the nation. In 1799, six enslaved workers and a farmer produced 11,000-gallons of whiskey. It is the only 18th-century distillery in the country and is the start of the official American Whiskey Trail. The signature rye whiskey can only be produced and purchased at Mount Vernon and is the official state spirit of the Commonwealth of Virginia. Tours of both structures, located three miles from Mount Vernon, are available.

The 2,000-acre Woodlawn Estate was a wedding gift from George Washington to his step-granddaughter and nephew.  In 1805, slaves used hand-fired 24” thick bricks to construct the Georgian-Federal, 5-part mansion, an architectural wonder. The family owned 90-100 slaves.

James Mason, a Baptist abolitionist, purchased the property in 1853 and it became a hub of abolitionism, Quaker, education and scientific farming technique activities. During the Civil War, both sides distrusted the Quakers and harassed and imprisoned them. An armed, interracial, civilian militia was established to protect them, unique for the region and the era.

Frank Lloyd Wright’s Unisonian-style Pope-Leighey House is the only Wright house in the region. It was commissioned in 1939 as a home that the middle class could afford. The 1,200-sq. ft., L-shaped, house cost $7,000 and has 2 bedrooms and one bath. The structure was built using only brick, concrete, cypress and glass. Wright also designed the furniture and incorporated such features as radiant heat, high ceilings and an open floor plan. The house was moved to this site in 1965. Tours are by reservation. (woodlawnpopeleighey.org)

West Ford’s mother Venus was a slave. She told people, including George Washington’s sister-in-law, that West (1784-1863) was George’s son and his sister-in-law saw to it that he was educated and freed at the age of 21. He became manager of Mount Vernon upon George’s death. He served as Washington’s first tomb guard, a job held by his family for years. He inherited 160-acres from Bushrod Washington and in 1833 he purchased 214-acres and established Gum Springs 2-miles from Mount Vernon. It was a place for freed Blacks and freedom seekers to start a life and gain economic stability. It remains one of the oldest African American communities in the country and nearly 500 residents are descendants of the first occupants.

The Mount Vernon Ladies Association purchased Mount Vernon and 200-acres for $200,000 in 1858 to preserve and restore it. They used Ford’s recollections as the basis of the reconstruction. Eventually they moved him to Mount Vernon and cared for him until his death. It is believed he is interred in the family tomb.

All of the sites adhere to strict health guidelines. Call for hours and information and ease your way back into travel.