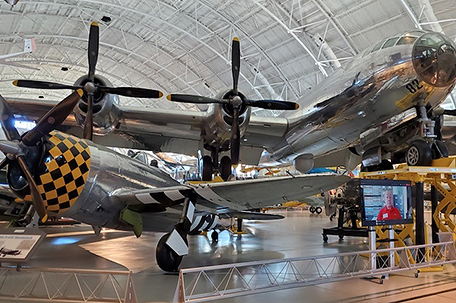 One can trace the country’s military history through visiting sites and attractions throughout Fairfax County, Virginia, from the pre-American Revolution Era to modern contemporary times. The region has always been significant as the site of three Native American villages, a route between the Revolutionary War-era northern and southern colonies, a Civil War transit hub and the location of several museums that interpret US military history. (#FXVA)

Immediately prior to the American Revolution, Fairfax’s population was 8,310. One resident was George Washington, commander of the Continental Army. No large battles took place in the county, but the Potomac River and proximity to Mount Vernon posed strategic targets. The British made infrequent raids along the Potomac and in 1781 the warship Savage landed and in an ensuing raid seized numerous Mount Vernon slaves.

On May 23, 1861, Fairfax County voted 1,231 pro and 289 against secession. Because Fairfax was located within the Confederacy and adjacent to Washington, D.C., on May 24 at 2:00 a.m. President Abraham Lincoln dispatched eight regiments to prevent Confederate troops from taking the capital.

Alexandria, Virginia was taken by the federals, and a series of forts were built in the area. Fairfax was considered “no-man’s land. There were approximately 60 small skirmishes and a Union raid on the county courthouse. The most important battles fought in the region were Dranesville (1861), Chantilly (1862), First and Second Bull Run/First and Second Manassas (1861/1862).

Both Battles of Bull Run endangered Washington, D.C., but each time the Confederates failed to attack the capital. Though technically not in Fairfax County, Manassas Battlefield National Park is a large part of the county’s history. Guided park tours resumed in March. Highlights of a visit include the Visitor Center museum, a 6-minute fiber-optic battle map and a 45-minute orientation video, “Manassas: End of Innocence.” (www.nps.gov/mana)

St. Mary of Sorrows Catholic Church at Fairfax Station, built in 1836, has a direct link to the Battle of Second Manassas. Clara Barton came from DC to set up a facility to treat the battle wounded. Operations were performed inside and pews functioned as beds. Barton stayed with the wounded until evacuations were complete. It was here that she recognized the need and began to plan for the establishment of the American Red Cross.

Laurel Grove School is the last extant “colored” schoolhouse in Northern Virginia. Former slaves, using donated materials, constructed it in the 1880s. It was associated with the Laurel Grove Baptist Church. The reconstructed school is now a museum, open by appointment.

Workhouse Arts Center and Lucy Burns Museum are situated inside a complex that began in 1910 as Occoquan Workhouse and became Lorton Reformatory. The reimagined space now features 12 galleries, 85 artist’s studios and offers performances and 750 arts classes.

The Silent Sentinels, 33 members of the National Women’s Party, picketed the White House. The suffragettes were arrested, taken to prison, chained, beaten and otherwise abused by prison staff on November 15, 1917, “The Night of Terror.” The Lucy Burns Museum, named in honor of one of the leaders, interprets the story of the suffragettes’ imprisonment and the history of the facility from 1910-21. The 19th Amendment, giving women the vote, was adopted on August 18, 1920. (www.workhousearts.org)

The National Museum of the United States Army relates stories of 245-years of US Army history through the experiences of the US soldier using state-of-the-art technology, immersive experiences, 1,389 artifacts and realistic dioramas throughout 11 thematic galleries. Entering into the 8,600-sq. ft. lobby, visitors encounter an inlaid 21-foot Army emblem in the terrazzo floor. Glass panels above denote the Army’s campaigns. An orientation film is shown in the 300-degree theater. An adjacent vestibule, lined with stainless steel pylons inscribed with the biographies and pictures of 41 individual soldiers, leads into the chronological gallery area. (@USArmyMuseum)

The 5,700-sq. ft. Medal of Honor Garden and Veteran’s Hall are located on the third level. The Veteran’s Hall Medal of Honor Experience interprets the history of the medal, the award process and the stories of individual winners. The garden embodies three core values exhibited by the Medal of Honor recipients, gallantry, intrepidity and valor. Every recipient’s name is engraved on a 10-ft. granite wall.

The museum’s first special exhibition — the “Nisei Soldier Experience” — features a collection of rare Japanese American artifacts. The exhibit tells the WWII story of Japanese American soldiers and their experiences in the US and abroad.

Artifacts not to be missed include Sgt. Alvin C. York’s WWI steel helmet, a WWII M4 Sherman “Cobra King” Tank, a Normandy Beach Higgins Boat, a UH-1B Huey Helicopter and the engine remains of the UH-60 Black Hawk Helicopter shot down in Somalia. Particular attention should be paid to the 70 sculpted figures in the galleries. Each was modeled after a currently serving soldier.

The on-site gourmet Museum Cafe is a wonderful option at any time during your visit. Visitors can opt for a quick snack or a sit down cooked-to-order selection. The food and the service are impressive.

The museum has created three registries that allow any Army active duty, veteran or civilian worker to place their name and service information on record. This can be done online at: ArmyHistory.org. Entrance and parking are free.  Reservations are necessary and are available online at NMUSA.org.

National Air and Space Museum’s Steven F. Udvar-Hazy Center is home to over 2,800 artifacts, memorabilia and videos that detail the story of aviation from early aircraft to spacecraft. Exhibits include flight attire worn by Amelia Earhart, a B-29 Superfortress bomber, Boeing Stratoliner, Supersonic Concorde and the Space Shuttle Discovery. A highlight of the exhibitions is the B-29 Enola Gay, the plane that dropped the bomb on Hiroshima on August 6, 1945. The museum borders Dulles Airport.

As you begin to plan post-pandemic adventures, consider Fairfax County. Its eclectic mixture of activities satisfies the interests of all ages. Washington slept here and you should too!