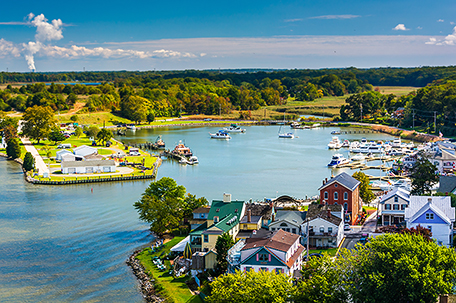 The 200-mile long Chesapeake Bay, the nation’s largest estuary, runs from the Susquehanna River to the Atlantic Ocean abuts Maryland and Virginia and is a short drive from Delaware and Pennsylvania. Scenic small towns and quaint villages are spread out along the Bay and its more than 4,500-miles of waterfront offers a plethora of water activities, boating, kayaking, swimming and fishing for more than 300 species, as well as bird watching, cycling, hiking and golf. Additionally, there are accommodations and fine dining options that really set the region apart. Many of the activities are linked to the history of the Chesapeake Bay and as one of the country’s earliest settled tracts of land the story of the founding and development of the Bay is totally unique. (www.tourtalbot.org)

Easton, Maryland is perfect for a grand getaway with friends or a romantic weekend for two. Its location, in the heart of the Chesapeake Bay activities and attractions, makes it an ideal city from which to set out to explore or to just take in the atmosphere of a perfect bayside town.  Easton was founded in 1712 because of a need for a courthouse to conduct official business. Annapolis was named the capitol in 1702 and there was no bridge connecting the cities. There were buildings in the area, but the first “official” building was the 20 by 30-feet brick Talbot County Courthouse. One of the next buildings was a tavern used to house people there for court. The city was named Talbot Courthouse, and in 1785 the streets were laid out. Three-years later the name was changed to Easton. (www.discovereaston.com)

Easton has a unique way of presenting itself, a guided Chesapeake Ghost Tour that introduces you to the history and those historic figures who keep returning. The 90-minute tour begins at one of the most renowned hotels in the region, the Tidewater Inn. (www.chesapeakeghostwalks.com/easton)

The Tidewater Inn sits on the footprint of a Victorian hotel that was destroyed in a fire with the exception of the basement. In 1947, 3-years after the fire, Arthur Grymes began construction of the Tidewater in the heart of the historic district. The hotel offers 20th-century grace and style with 21st century guestrooms and amenities. Mr. Grymes has been sighted numerous times checking on the quality of service. (www.tidewaterinn.com)

Diagonal to the Tidewater sits the Avalon Theater. The three story building, still a working theater, was once a vaudeville house. Marguerite, an actress, was found murdered in the elevator and many people have witnessed the elevator going up and down devoid of occupants. She is pictured in the lobby along with several other actresses. (avalonfoundation.org)

The current courthouse sits on the same spot as the original. It is also said to be haunted. Additionally, the building is a significant African American site.  Slave sales were once held on the lawn, as well as at least one slave execution. Frederick Douglass visited the region in which he was born in 1878, and he arrived by steamboat at Easton Point. While there, he gave a speech at the courthouse. He was the first Black person to speak there. In 2011 a statue of Douglass was placed on the Courthouse Green.

Easton’s Art Museum is notable for its large number of community programs and as the home of Maryland’s 50 paintings from the priceless Vogel Collection. Herb, a mail sorter, and Dorothy, a librarian, Vogel collected artworks in their one-bedroom apartment for their entire married life, storing some under the bed.  They donated their unrivaled collection in 1992 to the National Museum of Art. There were so many pieces that each state was given 50 pieces to display. (www.academyartmuseum.org)

The Third Haven Quaker Meeting House dates from 1682, 30 years after the congregation was founded. The original building was 60 by 20-feet before expansion and was accessed only by water. The glass windows date from 1797. Men and women worshipped together in separate sections. Several of the members were active in the area Underground Railroad. This is the oldest documented building still in use in the country. A tour of the cemetery and an 1880 brick meeting house are also offered.

One of the most groundbreaking events in African American scholarship is taking place in Easton in the historic district’s Hill Community. Freed slaves from the Virginia colony, and those freed by individuals because of religious beliefs and economic changes moved into the area. Easton’s first documented manumission occurred in 1670. In the early 1700s, African Americans established The Hill Community. The first national census in 1790 records 400 free Blacks and James Freeman as the first Black landowner. It has replaced Tremé as the oldest free Black community in the US and it is the oldest community in the US still occupied by the original families. More than 30,000 artifacts were discovered in an archeological dig, and 3,000 certificates of freedom have been located. The Hill is part of the Easton Historic District. 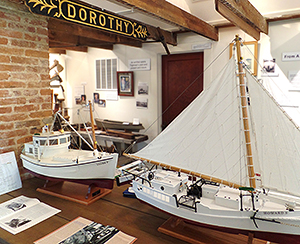 Walking tours are offered and the accompanying stories are compelling. Daphne worked 10-years to purchase her husband and 1-year later he was accused of a crime and hung on the green. Grace Brooks was born in 1740, purchased freedom for 70 pounds and then that of her children and grandchildren. She purchased a house and half-acre lot in 1790. She lived next door to Sukey Bailey. When she died in 1810 she deeded the house to Sukey, possibly a nickname, the grandmother of Frederick Douglass.

Nearby Tilghman Island’s settlement was established in 1710 on land that was once a Native American hunting ground. It was laid out in the 1780s as a waterman’s town. The views are lovely and highlights are the five “W” houses, architecturally designed to catch the breeze in all directions and the Waterman Museum. There are more than 100,000 waterways in the region and this is the story of the people who draw more than 450-million pounds of seafood from those waters annually. (www.tilghmanisland.com)