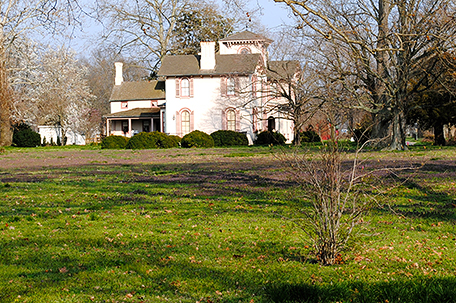 John Legend’s television series “Underground” dealt with the harsh realities of slavery, the courage required to become a freedom-seeker and those who operated the Underground Railroad at incredible risk to themselves and their families.

The series revolves around the escape of the fictional Georgia Macon 7, but seeks to tell a larger story by injecting real-life characters and incidents into the narrative. Over its two seasons, many of the depicted occurrences actually took place along the Eastern Shore. Sites are open to visitors and indicated with interpretive markers.

Harriet Tubman supplied a route for eight Bucktown-area slaves to follow her to the north in March of 1857. They were to contact a free Black man, Thomas Otwell, to lead them to their next stop; instead, Otwell guided them to the Dover jail for the $3,000 reward. Eventually they all escaped and the “Dover Eight” reached freedom. 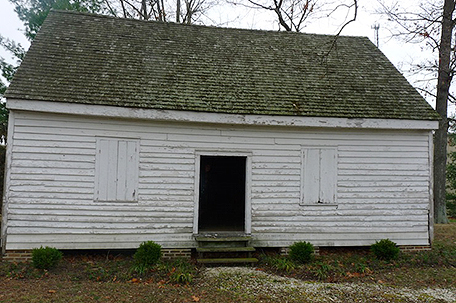 Their route may have included the cabin of Tubman’s parents in Poplar Neck. The cabin is no longer standing, but the similar James H. Webb log cabin is on view in Maryland. Webb, a free African-American, built a one-room cabin on his 54-acres in Caroline County in 1852, a few miles from the Tubmans. The fully restored cabin has a brick food pit that may have been used to hide fugitives. As free people, the Webbs would have been in constant danger by helping the fugitive slaves.  (www.harriettubmanbyway.org/webb-cabin). 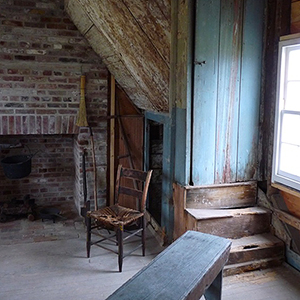 Upon reaching Philadelphia, freedom seekers were often met by abolitionist William Still. Still’s father purchased his freedom and moved to New Jersey, followed by his wife Charity who escaped from Delmarva after her second attempt. Still was born free in New Jersey and moved to Philadelphia to work with the Pennsylvania Anti-Slavery Society. The William Still Interpretive Center features their relocated one-room cabin, furnished to replicate a slave cabin that the elder Still’s would have lived in. (www.harriettubmanbyway.org/william-still-interpretive-center).

Ross was governor from 1851-55. At the outbreak of the Civil War Lincoln sent troops to Delaware and Ross fled to England. He owned 1,398-acres of land and held the 2nd highest number of enslaved in the region.  (www.seafordhistoricalsociety.com).

One of the most compelling characters in “Underground” is Patty Cannon, portrayed by Sadie Stratton. The real Patty has come to be known as America’s first serial killer, a slave stealer, a she-devil and in modern parlance, a psychopath. Visitors can follow her trail along the 40-mile Nanticoke Heritage Byway and 64-mile Nanticoke River. (www.nanticokeheritagebyway.org). 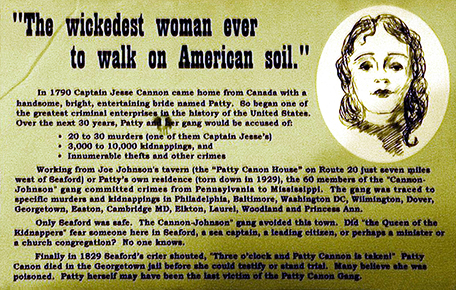 Myths have shrouded the facts of her life, but there are a few things we can prove. Martha “Patty” Hanly Cannon was born around 1760 and after her father was hanged for murder.  Cannon’s mother ran a tavern. While working in the tavern she met and wed Jesse Cannon in 1790 and moved to the Delmarva peninsula.  Three years and two children later, he died and Patty later confessed to poisoning him. Left to her own devices, she formed a gang of robbers, thieves and murderers who kidnapped free and enslaved Black people and sold them.

When her daughter wed Joe Johnson, he and Patty were headquartered out of Johnson’s tavern and a house nearby. The house was situated on the Delaware-Maryland State Line where three counties met, allowing her to move between jurisdictions. 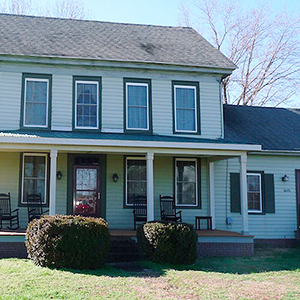 The Cannon-Johnson Gang robbed and murdered travelers, but their interstate crimes involved stealing African-Americans. The gang, including Blacks, quickly learned that capturing freedmen was less dangerous than taking slaves because their owners would pursue them. Freedmen were on their own and the gang captured them from as far away as Baltimore, New Jersey and Philadelphia. Both male and female slaves were kidnapped.  Any babies or small children were killed.

In the early 1820s, a gang member was captured and the handwriting was on the wall. Johnson fled and Cannon retired. In 1829, a tenant on Cannon’s farm found bones. Soon after, at Cannon’s Johnson’s Crossroads property, a man inquired about the state line. Cannon walked him to it where she was arrested by a Delaware sheriff and taken to the Georgetown jail. Cyrus James, a Black boy she had raised, was arrested and took them to where bodies were buried and told on the gang. Accounts given by victims were published in the abolitionist “African Observer.” Cannon confessed to personally murdering 11 people.

On May 11, 1829, Cannon died from a dose of arsenic and was buried in Sussex County jail yard. Later, the body was relocated and her skull became separated. It is now in the Smithsonian.

The Patty Cannon House was torn down in 1948 but a marker indicates the area. There were three rooms over three and it is said that captives were chained in the house awaiting transport south.

Cannon House at Johnson’s Corners on Maryland 392 and Delaware 20 was once a tavern but it was extensively renovated in 1977. The two-story tavern was their headquarters and the attic and basement were used to hold captives. 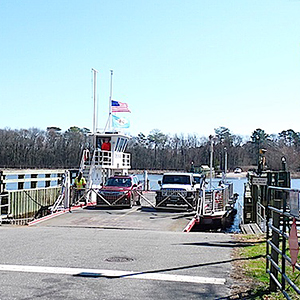 Cannon Ferry, now Woodland Ferry, began as an Indian crossing. The ferry started operation in the 1760s. It was used to transport captives across the Nanticoke. Several small islands are visible, most notably Tick and Pickle Pear Islands. They were used to hold captives who were chained to trees until Cannon had enough people for a shipment.

Harriet Tubman was about 4-years old when Cannon died, turning a page of African-American history and opening up a new chapter.

If you do not feel confident in your ability to navigate the area, there are two companies that offer outstanding tours that are informative, comprehensive and enjoyable; Relaxing Tours, (www.relaxingtours.net) and Sun Otter Tours, (www.SunOtter.com).  Call for availability, itineraries and pricing.