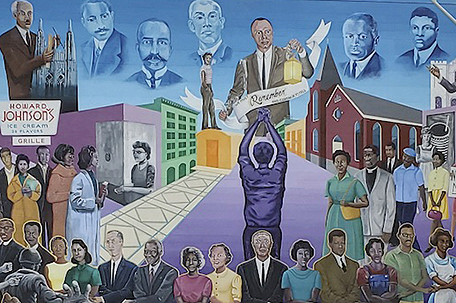 “Hope is a song in a weary throat.”

The use of slave labor in North Carolina was, from the outset, a moneymaking proposition. In 1663, eight Lord Proprietors were granted a charter from King Charles II.

The “Concessions of 1665” were then drafted, in which 50 additional acres were assigned to settlers based on the number of enslaved persons 14 years and older each brought into the colony. The 1669 Colonial Carolina Fundamental Constitution officially legalized slavery.

Historic Stagville is a National Historic Site consisting of two major areas, Stagville and Horton Grove, that were part of one of the state’s largest plantations.

Once the property of the Bennehan-Cameron family, it covered 30,000 acres and held approximately 900 enslaved individuals.

Highlights of the tour include a 1780s built Bennehan home furnished with era appropriate furnishings and the 1860 slave built Great Barn.

Horton Grove was home to 80-100 slaves.  A row of four of their houses remain. The houses are unusual two-story, 17-ft. by 17-ft. timber frame structures featuring wooden pegs.

Stagville’s mission is to research and present the stories of the plantation’s slave population.

There are 30,000 documents left by the family including a unique 1776 “birth book” that records parent’s names. The narratives are a window into the daily lives of the enslaved. (@stagville)

After the Civil War, the freedmen had few options. Many stayed on the plantations as sharecroppers.

African Americans began migrating to the southwest section of Durham for factory employment shortly after the Civil War.

They established the community of Hayti and by 1905 it was thriving and a model for other Black settlements. Parrish Street, lined with Black businesses, was the heart of Durham’s Black Wall Street. In the 1960s, the area declined due to urban renewal.

John Merrick founded North Carolina Mutual Life Insurance Company in 1898. In 1910, the bank built to the six-story Trust Building, the second tallest in North Carolina. During the Great Depression, the bank was led by Asa T. Spaulding, the first Black actuary in the nation. The bank is the oldest and largest Black owned bank and is listed on the National Register of Historic Places. (ncmutuallife.com)

Former slave Edian Markham founded Union Bethel AME Church in 1869. In 1891, a new church was built and renamed St. Joseph’s African Methodist Episcopal Church. The exterior bricks were made by the Fitzgeralds, Black craftsmen who moved from Chester, Pennsylvania to establish a brickyard in Durham.

The original church is home to the non-profit St. Joseph’s Historic Foundation, now manager of the Hayti Heritage Center. The Center preserves Durham’s African American heritage and is home to cultural spaces including a 400-seat performance venue.

The racially segregated Carolina Theatre opened in 1926 as a vaudeville space, but quickly began hosting  films. On the day President John F. Kennedy was inaugurated in 1961, protests began to allow Black patrons to sit downstairs and not be relegated to the balcony  or so called “buzzard’s roost.”Up to that point,  Blacks purchased tickets at a side entrance and climbed 97 rickety steps to the balcony.

In reaction to the protests, the theater denied all admission to Blacks. The case was taken to court and the theater was desegregated in 1963. It was renovated and the outstanding and immersive Civil Rights Exhibit — “Confronting Change” — opened in 2014. On exhibit are the original box office, balcony and stairwell. This is very well done and must be visited. (@CaroliaDurham)

North Carolina College for Negroes was founded in 1910 by Dr. James Shepherd. In 1969  it was renamed North Carolina Central University. The university’s art collection is one of the nation’s best. The Carol G. Belk Gallery houses the permanent collection, including works by Henry Ossawa Tanner and Jacob Lawrence. NCCU is on the National Register of Historic Places.

The 2015 Durham Civil Rights Mural was created to visually depict events and individuals who impacted the era. Martin Luther King is shown speaking during one of his five public visits. He cancelled his sixth trip and chose to go to Memphis instead. The Royal Ice Cream sit-in in 1957 preceded the Greensboro sit-in by three years and is pictured here. (www.muraldurham.com/durham-civil-rights-mural)

Civil Rights activist Pauli Murray was a lawyer, Episcopal priest and author. She earned a master’s in divinity from the General Theological Seminary and was the first Black female to earn a PhD in Judicial Science from Yale Law School. Murray helped found the Congress for Racial Equality and the National Organization for Women. Her home was designated a National Treasure in 2017 and is scheduled to open to the public later this year. (www.paulimurrayproject.org)

Philadelphia’s Julian Francis Abele earned his place on the mural as the African American architect designer of a large portion of Duke’s campus, including its centerpiece  Duke Chapel. Architecturally it was inspired by English Gothic design.

Bull Durham Blues is a unique regional blues event that is featured for three days annually at the Bull City Blues Festival each September. (www.hayti.org/blues-and-roots-celebration)

Durham’s sole Black-owned inn — Morehead Manor Bed and Breakfast — is owned and operated by Monica and Daniel Edwards. The Colonial Revival home offers four large guestrooms, each with private bath and a complete menu of amenities. Complimentary beverages, homemade desserts and a generous breakfast are offered.

Guests can find a cozy nook or walk to any of the numerous sites and attractions. The inn is available for special rentals and offers weekend packages. (www.moreheadmanor.com)