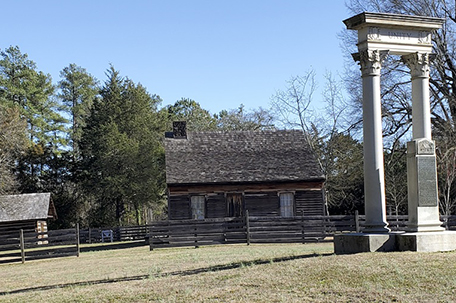 Cities are, in their own ways, canvasses that depict the history, culture and dreams of the residents. Stories reflected there are ever changing but the past never really disappears and, if one looks closely enough, one can see traces of earlier times and their ongoing impact.

Durham is a classic example of a city with a storied past intertwined with a modern vibrancy.   While it has been awarded the designations of “#1 City for Millennials in the United States,” “#13 Best Places to Live and Foodie Capitol of the South,” the city also boasts three state historic sites and very significant African American history sites. (@DurhamNC)

Before the appearance of Europeans, the Durham region was inhabited by two tribes –the Eno and Occaneechi — and was probably the site of Adshusheer, a Native American village.

The original Indian trade routes evolved into the Great Indian Trading Path, and as many as 18 shorter paths, ran from the Philadelphia area to the Deep South facilitating trade and transport for settlers.

Europeans built settlements near these paths, thereby impacting North Carolina’s city placement. Bartlett Durham donated 4-acres of land to the NC Railroad Company in 1849. They built a station and a town grew up around it.

That same year, the first tobacco factory was established. Tobacco was a major crop in the region, even pre-contact, and its growth as a cash crop was an expansion of its uses by indigenous people for protection, prayer and medicinally.

People believe the Civil War ended with Lee’s surrender of 26,000 troops, but the war continued. Gen. Joseph Johnston and Gen. William Tecumseh Sherman met at Bennett Place on April 17, 1865. They worked out surrender terms, but the government felt they were too lenient, and Jefferson Davis told Johnston to continue to fight. Johnston and Sherman met again on April 26, and Johnston surrendered 89,270 troops. The final surrender occurred on June 23, 1865.

Tours are offered at the 1890- acre Piedmont NC farm, Bennett Place. The site has been fully reconstructed to appear as it did in 1865. Three buildings, the farmhouse, kitchen and smokehouse interpret both the surrender and typical North Carolina’s Southern farm life. A museum in the Visitor Center shows an orientation film –“The Dawn of Peace” — and displays numerous artifacts. The 1923 Unity Monument is on the exterior, and visitors can picnic or follow several forest nature trails. Admission is free. (www.bennettplacehistoricsite.com)

As the soldiers idled in neutral Durham from April 17 until April 26, they discovered and smoked up all the local  tobacco. Durham believed it was ruined. Soon they began to receive orders for their special “bright leaf tobacco” from all over the country and a massive tobacco industry was born. The bull was selected as the trademark from a jar of Coleman’s Durham Mustard and Bull Durham went down in history. Major, a 10-foot-tall bronze sculpted bull provides a photo-op in the heart of the city. (www.discoverdurham.com)

Washington Duke received 72 acres of farmland upon his marriage in 1842. He owned one female slave, Caroline, and leased an enslaved worker when needed. He served in the Confederate Navy, and upon his return home, he switched to tobacco manufacturing. In 1874, he moved to the city, constructed a two acre factory and four  years later formed W. Duke, Sons & Co. –The American Tobacco Company, the world’s largest manufacturer, in 1890. The Supreme Court broke up the monopoly in 1911.

Duke Homestead State Historic Site and Tobacco Museum complex features Washington Duke’s home, farm and factories as they appeared from 1852-74 when the family lived there. The museum showcases tobacco processing from soil to sale. (@DukeHomestead)

The 14.58 acre American Tobacco Historic District, the American Tobacco Campus, consists of 14 buildings and three contributing structures that comprised the tobacco factory complex, adjacent to the Durham Bulls Athletic Park. The Dukes purchased an existing Italianate factory in 1890 and proceeded to expand the complex into the 20th century. The design of the warehouses reflected the company’s prosperity. Each post and beam warehouse was seven bays wide and 20 bays long. The campus now boasts an impressive list of restaurants, shops, walking paths and several hundred events annually. (americantobacco.co)

While exploring, you will come upon a small cedar cabin that, upon closer inspection is revealed to be the relocated home of Burt Shavitz, co-founder of Burt’s Bees. The nearby headquarters has a creatively painted exterior and a viewing station where visitors can watch the bees. (www.burtsbees.com)

One of the easiest ways to unearth the earlier history and culture that shaped us is through our culinary traditions. Durham is a dining destination and every meal is a treat. The eateries are unique. I suggest you try as many as you are able to. Here are four for the road that offer memorable food, outstanding service and affordability.

True Flavors Diner. This is Southern comfort food as art served with warmth and flair. (@trueflavorsdiner)

Dame’s Chicken and Waffles. Damion “Dame” Moore acknowledges the Harlem Renaissance roots of chicken and waffles and diners acknowledge the fact that Dames spin on the dish takes it to new levels. Try one of the “smears,” flavored butters that are a house specialty. Every dish is a masterpiece. Check out the online menu. (@dameschickenandwaffles)

Amy May Pop Art: These handmade pop art treasures make perfect gifts. You can purchase an existing piece or have one personalized. (@amymaypopart)

Vert & Vogue has been featured in The New York Times and Southern Living. Here you can purchase exquisite global designer fashions created from quality natural fibers and textiles. (www.vertandvogue.com)