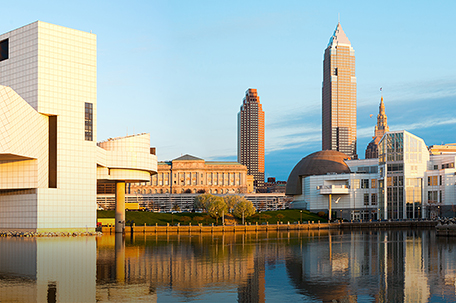 In 1669, the French explorer, René-Robert Cavelier, Sieur de La Salle — the first recorded European in the Ohio region — was met by the Iroquois Indians, who migrated there in the early 1600s. The river and the state would both eventually be named Ohio, which is the Iroquois word for “beautiful river.”

The region was a bountiful native beaver hunting ground, and although the Iroquois were quickly decimated and supplanted by other tribes — including the Delaware and Shawnee — the French established posts to trade with the natives. After the Revolutionary War, in 1800, as part of the Northwest Territory, Ohio became part of the American frontier. (www.thisiscleveland.com)

Former Revolutionary soldier, Gen. Moses Cleaveland, was hired in 1796 to survey the area. One of the first new towns on the shore of the Cuyahoga River was founded by him and named in his honor. The “a” was dropped in the 1831. From the outset, Cleveland was a beacon for events and legendary individuals.  Early on, noteworthy Native Americans made their mark on the region.

Stigwandish — or  “Standing Stone” — was a Seneca chief who assisted Cleaveland’s survey party. and during the War of 1812 he alerted the settlers to an impending British attack. Tecumseh — or “Shooting Star”– was one of the country’s most historic leaders. He vowed to resist White incursion onto tribal land by uniting all the tribes, creating their own country and using armed resistance.

Garrett Morgan’s parents were slaves. In 1895, he moved to Cleveland and after starting as a sewing machine repairman, he was wealthy by the 1920s and an inventor of some note. He patented the first traffic light and in 1916 a gas mask that saved the lives of miners trapped beneath Lake Erie.  The mask was ultimately used by fire departments and during World War I. A plaque honoring his achievements is at the Garrett A. Morgan Water Works.

League Park originally opened in 1891 and was listed on the National Register of Historic Places in 1979. The Negro Leagues, Women’s League, Babe Ruth and Satchell Paige are among the people who played there. The two story ticket booth houses the Baseball Heritage Museum with its displays dedicated to the diverse history of the game. Memorabilia, photographs, uniforms and other artifacts contribute to the interpretations. (www.baseballheritagemuseum.org)

Branch manager William Bradford brings the legendary Langston Hughes to life at the Langston Hughes  Library Branch. Hughes attended Cleveland’s Central High School, which was the first to enroll Blacks before the Civil War, and attributed his years there as a stimulus to his imagination and desire to write. He was the class poet and editor of the school annual. Hughes would go on to become the “Poet Laureate of the Negro People.” The library’s special collection showcases photographs, books and documents. Highlights of the collection are his 1920 yearbook and his poem, “A Negro Speaks of Rivers” written across the ceiling. Large sculptures on the library exterior depict different forms of protest. (www.cpl.org/locations/langstonhughes)

The Buckland Museum of Witchcraft & Magick opened in 1966 and relocated to Cleveland in 2015 to interpret legendary stories in an unbiased manner. The museum chronologically and anthropologically explores folklore and the paranormal through a collection of artifacts, photographs and historic objects. Highlights of the tour are the first Wiccan headdress, Raymond Buckland’s purple ceremonial robe, a centuries old mandrake root and a tarot card display. A personal card reading can be arranged on the premises. (www.bucklandmuseum.org)

Cleveland Police Museum relates the history of crime and punishment in the city. On view are photos, documents, firearms and a jail cell, but the big draw here is the Eliot Ness display that focuses on the 1935-38 Torso Murders. This series of 13 murders was never solved by Ness, who was safety director. Even after the murders ceased, the killer continued to taunt Ness. The case remains open. (www.clevelandpolicemuseum.org)

Next stop, the birthplace of the legendary Superman. In 1932, 18 year old Jerry Siegel created Superman at 10622 Kimberly Ave. The home is privately owned, but fans can take a picture with the signature “S” on the exterior. A plaque marks the spot.

Made famous in the legendary holiday movie, “A Christmas Story,” the Ralphie Parker residence has been restored and is now part of a complex that includes the house, garage, museum and visitor center. Tours of the house are unique, because visitors can touch and sit and examine items in the house. The museum showcases props and costumes from the movie and visitors can purchase their own Official Red Ryder Carbine-Action Model Air Rifle or lady leg lamp. The guided tour led by Ernie Scales is excellent and filled with movie information, photo ops and merriment. (www.achristmasstoryhouse.com)

The seven floor Rock & Roll Hall of Fame was established in 1983 and is a glass incarnation of an ancient pyramid built to preserve the people’s legacy and legends. The hall shares the history and power of music through extensive use of audio, video and an incomparable collection of artifacts, stage outfits and memorabilia.

Highlights of a tour are the Early Influences and Rock Legends culturally thematic galleries and The Garage, where you get to channel your inner rock star. After visiting the Hall of Fame, end your tour with the Connor Theater presentation of “The Power of Rock Experience.” Before you depart, stop in the gift shop and, located just outside, Johnny Cash’s tour bus. (www. rockhall.com)

Westin Cleveland Hotel recently underwent a $64-million renovation. The 484-room hotel is centrally located and is walking distance to many attractions. The hotel offers great views, exceptional service and a WestinWORKOUT® Fitness Studio. There are an on-site Starbucks and Urban Farmer, farm-to-table restaurant. The food is locally sourced and cooked to perfection.

Mingle with the legends. (@TheCle)

Maryland African-American Heritage Travel Guide: It is widely distributed, may be viewed online at www.visitmaryland.org/brochure or mailed after requesting at 1-800-719-5900.

Tweet Share Pin Email Informational Resources In response to the outbreak of coronavirus (COVID-19), the City of...

Tweet Share Pin Email ABOVE PHOTO: The Manhattan bridge is seen in the background of a flashing...