Smooth Traveler: Civil War and Reconstruction: The Battle for Freedom and Equality 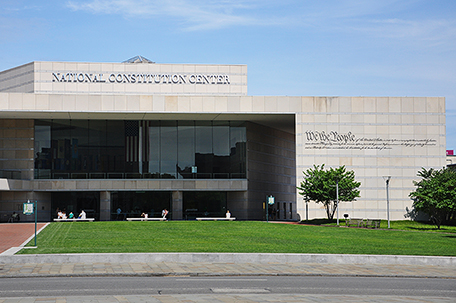 The National Constitution Center opened the “Civil War and Reconstruction: The Battle for Freedom and Equality” exhibit on May 9 with an introduction to the era and discussion of current political and social ramifications. This groundbreaking exhibition is the first in the country to delve into the ways in which Constitutional controversies regarding slavery split the country and paved an inexorable path to the Civil War.

It details the nation’s transformation in general as well as the resulting Constitutional questions, changes and efforts to become the inclusive country promised in the Declaration of Independence, with liberty and justice for all. The exhibition is permanent. (www.constitutioncenter.org)

Reconstruction is one of the least taught and fully understood periods in U.S. history. The dates are even subject to disagreement, but the generally accepted dates are 1865 — the end of the Civil War— until 1877, when federal troops were withdrawn from the South.

This 12 year period would define the trajectory of Black life in America  and result in significant future ramifications. In order to better understand the exhibit and the era, I have created a primer, but I leave it to you to visit the center and learn more about it.

Jefferson included an anti-slavery clause in the Declaration of Independence in June 1776; it was removed. Jefferson lived in Philadelphia in the Graff House, located at 700 Market Street, while he worked on the document.

There is a short video, and the house features period furnishings, including a replicated lap desk and swivel chair. Self-guided tours are offered during limited hours.

Nowhere in the Constitution is the word “slave” mentioned, but certain protections of the institution were included. The notable “three-fifths clause” (Article I, Section 2) granted additional representatives in the House and Electoral College.

Congress was not permitted to make the Atlantic Slave Trade illegal for 20 years (Article I, Section 9, Clause 1) and another clause made it mandatory for fugitive slaves to be returned to their owners (Article IV, Section 2).

At the end of the war, efforts began to re-admit the seceded states to the Union, assist former slaves in a new life and rebuild a viable Southern economy. In 1865, the 13th Amendment abolished slavery, and the Freedman’s Bureau was formed to support the formerly enslaved. President Andrew Johnson — who succeeded President Abraham Lincoln following his assassination — was an avid racist and rendered little federal assistance to Blacks.

The Southern governments, supported by many citizens, went to great lengths — using terror, lynching and other forms of pressure — to maintain social, economic and political control. The Civil Rights Act of 1866 granted additional protections, and the 14th Amendment  granted citizenship and equal protection to Blacks. As a result of Johnson’s attempts to halt the progress of the 1867 Reconstruction Act, allowing Black men to vote, he was impeached.

The 15th Amendment was ratified in 1870 and granted all male citizens the right to vote. Voting rights were so critical that Southerners began an organized campaign to thwart these rights in particular.

More than 100 artifacts are displayed in a 3,000-ft. series of chronological galleries, beginning with “Building to Crisis, the period from 1787-1860.” The Civil War area covers the period from1860 through1865 and showcases a large collection of items from the Civil War Museum of Philadelphia. (www.civilwarmuseumphila.org)

“Reconstruction” covers post-war circumstances and activities, the passage of the 13th, 14th and 15th Amendments, and the erosion of gains in the 1870s. The final section highlights the continuing struggle for equality, with a focus on legislation.

Each artifact was chosen to amplify the story. Items not to be missed include 1830s shackles, an 1800s mandolin handcrafted by a slave, Dred Scott’s 1846 freedom petition, Frederick Douglass’ inkwell, a portrait of Lincoln by David Bustill Bowser, rare original documents and an 1866 Klan robe and hood. It should be noted that Bowser was a Black, self-taught artist who resided at 841 N. 4th Street.

“Civil War and Reconstruction: The Battle for Freedom and Equality” is designed to be interactive. There are several stations that allow visitors to explore more deeply areas of personal interest.

Guided tours by reservation, gallery talks, a theatrical production and a solo performance of “Frances Ellen Watkins Harper: The Great Problem to be Solved” are all available. Frances Harper was a free Black woman who moved to Philadelphia from Baltimore. She became an activist and poet, and lived at 1006 Bainbridge Street.

This is a significant exhibition created to provoke thought and discussion, as it has done for more than 200 years. Even the framers of the Constitution did not always agree on the interpretation on certain issues. In 1787, Benjamin Franklin stated, “I confess that there are several parts of this Constitution which I do not at present approve, but I am not sure I shall never approve them.

For having lived long, I have experienced many instances of being obliged by better information, or fuller consideration, to change opinions even on important subjects, which I once thought right, but found to be otherwise.” Join the conversation.

Colonists primarily drank tea prior to the American Revolution, but the Boston Tea Party, ironically strategized in the Green Dragon Coffee House, jettisoned coffee onto the list of patriotic musts. Now travelers are among the 40-million daily consumers demanding coffee to start their day. A new artisan coffee product, Steeped Coffee, has just made your daily consumption portable and accessible.

The product is 100% ethically sourced, is gluten and GMO free, made in the US and uses eco-friendly and renewable packaging. Best of all barista-approved Steeped Coffee comes in a steeped bag that only requires 8oz. of hot water to produce the perfect cup. The bags are individually wrapped, steep to taste and imbibe like royalty. steepedcoffee.com