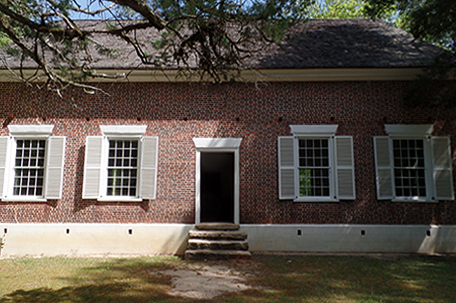 Georgia is second only to Texas in its number of counties.  The history of these 159 counties is as diverse as their population and geography. Archeological remains prove that there were native people in Georgia as early as 13,000BC, but European contact was not noted until 1526 when a Spanish naval expedition entered the region. Hernando de Soto was the first explorer to document the landscape and the people he encountered during his 1540 expedition. Although a number of individuals of African descent were members of the early Spanish expeditions, wholesale slavery was not introduced into the colony until 1750 when the number of Blacks increased significantly. The blending of these groups resulted in contributions from the arts, architecture, music, cuisine and material culture that is expressed in all the counties and fine-tuned uniquely in each. exploregeorgia.org

The colony of Georgia was established by James Oglethorpe in 1732 and named in honor of King George II. The initial idea was to resettle debtors and prisoners who were a burden on the country. Prisoners were the first settlers in 1733 and a series of forts were erected and manned to protect the British colonies from Spanish invasion. Georgia was the 13th colony and would become the 4th state in 1788. 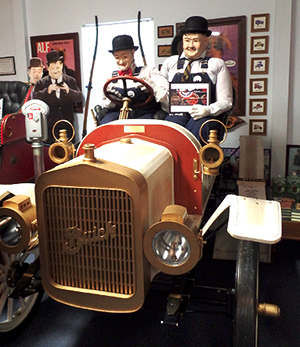 The Laurel and Hardy Museum

Columbia County, named in honor of Christopher Columbus, was legislated in 1790, but its first village, Brandon, dates from 1752. The county’s history is a microcosm of pre-colonial events including a 1773 visit by botanist William Bartram and two delegates to the constitutional convention. At the start of the Civil War Columbia County was filled with plantations and a Black population that exceeded that of Whites substantially. choosecolumbiacounty.com

The city of Harlem was founded by a group of people who previously lived one mile away in Sawdust, Georgia. The residents of Sawdust were raucous, so some of the citizens established their own more peaceful town in 1870.  One Harlem resident, Norvell Hardy, was born on Jan. 18, 1892. His father Oliver, a Confederate veteran, died before he was a year old. Norvell took his father’s name, and as Oliver Hardy, became half of the great comedy team Laurel and Hardy.

The Laurel and Hardy Museum is filled with artifacts and memorabilia that interpret the duo’s career after they joined forces in 1926 in silent films. Together they made over 100 films and the museum has a complete collection that visitors may view. A full-scale wooden Model-T, complete with L&H in the front, provides a unique photo-op. On October 1st, the city will hold the 28th Oliver Hardy Festival. Fans attend from around the globe. harlemga.org

Gary and Jean Russeth opened the Ollie Also & Stanie Too Fine Mess Old Car Museum in 2006. This wonderful little museum displays original and wooden, full-scale, Model-T cars from L&H films handcrafted by Gary along with figures and posters throughout. The vehicles are amazing with all interior parts carved out of wood. Highlights of the collection feature an original 1915 Ford and a 1903 all-wood Ford Model-A. laurelandhardymuseum.com

Appling Courthouse is an architectural gem and the oldest in the state in continuous use. The Appling family donated the land and in 1790 a wooden structure was built. The current brick building stands on its original foundations. Highlights of a tour include the tin ceiling, dual staircases and the courtroom. Near the courthouse stands the Walnut Grove Schoolhouse, a one-room school built for the African American community.

Daniel Marshall founded Kiokee Baptist Church, the oldest Baptist church in the state, in 1772. The building on site is the third in the church’s history with the first being a log cabin and the third being this 1808 brick building. The church was integrated and black congregants were seated in the balcony. The church represents skilled craftsmanship of the era in rural GA.

The 284-acre Savannah Rapids Park is situated at the falls of the Savannah River, an important transit route since the region was populated. As proof, nearby 16-acre Stallings Island National Landmark is the site of prehistoric remains. The Augusta Canal was completed in 1847, now the Augusta Canal National Heritage Area and visitors can obtain spectacular views from land on seven miles of accessible trails or by taking a canal boat tour. The Savannah Rapids Pavilion is available for event rental.

Bulloch County was founded in 1796.  Five years later, 200-acres was donated for a county seat and three years later Statesborough was established. During the Civil War, Sherman passed through burning the courthouse. @VisitStatesboro

Specially selected aspects of Statesboro’s history are interpreted in the museum inside the visitor’s center. The galleries are designed by GA Southern University students and filled with photographs, artifacts and information plaques. This should be your first stop.

Bluesman Blind Willie McTell is arguably Statesboro’s most famous citizen. To honor his musical contributions, a mile-long trail has been designated. In town, visitors can see a mural and the former Jaeckel Hotel on Main Street where Blind Willie sat on the steps and played for money. The original hotel sign has been restored.

The Clubhouse and Hackers Golf Park offer so many exciting activity options that you are bound to be overwhelmed. It began in 1998 as a golf practice field and opened in 2010 as a 64-acre sports complex. The one-acre baseball themed Clubhouse’s concourse is designed to resemble that of a stadium. There are 24 bowling lanes, a laser tag arena and an arcade. On the exterior guests can enjoy Hackers Golf Park, a six-acre soccer venue and the state-of-the-art Coca-Cola 125 Raceway. The 1.25-mile track immerses you in the auto racing experience with on board audio. This is truly a world-class sports destination. @clubhousestatesboro

A tour of Chris Mitchell’s Pladd Dot Music is another unique Statesboro experience. Here you can watch the finest craftsmen create “boutique” all-American made guitars and amps. Only the fretboards on the 100 guitars they make annually are premade. Visitors can follow the process from start to completion. @PladdDotMusic

Eagle Creek Brewing Company offers brewery tours and live music performances. A visit is a great way to bring part one of our GA county tours to an end. @eaglecreekbrew