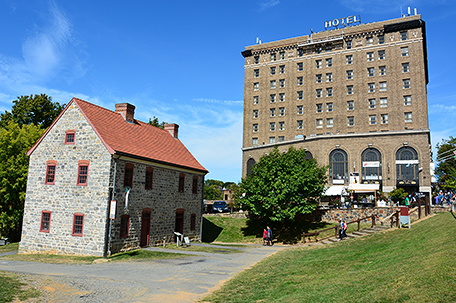 On April 2, 1741, the Moravian Church, a pre-Reformation religious sect, received a deed for 500-acres of Pennsylvania land on the Lehigh River. On Christmas Eve of the same year, the settlement was officially named Bethlehem. Bethlehem’s location in the heart of the fertile Lehigh Valley and the industrious nature of the Moravian community ensured success for more than a century.

Historic Moravian Bethlehem is a National Historic Landmark District, one of eight in the state. There are 20 historic sites there and it is currently on the tentative list of UNESCO sites. In 1937, Bethlehem launched a campaign to become the official “Christmas City” and since then, thousands of visitors gather there to experience an old-fashioned holiday with a modern twist. With more than 50 events and immersive activities, there truly is something to enchant everyone. (www.bethlehempa.org).

Panoramic views are offered as you cross the Hill-to-Hill Bridge connecting the old and new sections of Bethlehem. The northside of the city contains the historic area and a series of Christmas-themed tours are offered. Visitors can take guided, costumed docent led tours by carriage, on foot and custom designed for your group. They can also opt to ride the Free Xmas Tree Trolley with scheduled stops.

Tours include more than 200-years of history and many of the city’s 20 historic sites.  (www.historicbethlehem.org). 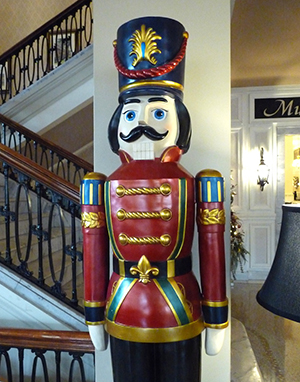 Utility poles throughout the district feature decorated and illuminated Christmas trees creating a festive promenade for shopping and a holiday saunter. Doors and windows are beautifully adorned and the 1810 Federal-style Goundie House showcases a Live Advent Calendar. Other stops not to be missed are the working Blacksmith Shop, the 1740’s Apothecary Museum, the 5-story log 1741Gemein House Moravian Museum, the 1746 Moravian Bookstore and the 1806 Central Moravian Church designated one of the Ten Greatest Places to Reflect on Christmas Eve. Special note should be taken of the 6-ft. Moravian star suspended inside the church belfry. (www.bethlehemtraditions.com).

The Bethlehem By Night Christmas Tour is extremely popular and may be reserved every night from November 24th through December 30th. It includes a visit to the iconic Moravian Star set atop South Mountain. The stars were originally used in Moravian classrooms to exemplify geometric principles and later as symbols of the nativity. The first star was a $460 wooden construction, 61-ft. by 51-ft., with 100 lights. Bethlehem Steel manufactured and donated a second star. The current LED-lit star is 91-ft. tall and is lighted nightly. (www.christmascity.org). 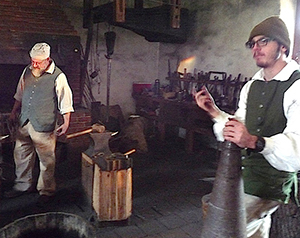 Historic Hotel Bethlehem is situated on Main Street in the location of the first house built in 1741. The site has been a hotel since 1794. The hotel joins in the festivities with 26 Xmas trees and more than 40,000 lights in the lobby. The Beaux-Arts structure has hosted everyone from Kennedy to the Dalai Lama and Sting to Ali. It offers luxury accommodations and even “A Room With a Boo”, room 932, investigated and deemed haunted. (www.hotelbethlehem.com).

Hotel Bethlehem has two award-winning restaurants and the legendary Sunday Musical Brunch. The buffet contains every conceivable culinary delight accompanied by accomplished musicians. It has been named one of the “Top 100 Brunches in the Country”.

On 8-acres south of the Lehigh River sits SteelStacks, so named because it was home to Bethlehem Steel and remnants of the gigantic furnaces remain visible. The site is used by the nonprofit ArtsQuest organization for events throughout the year but Christmas takes on an even greater dimension Thursdays through Sundays. Bethlehem’s tented Christkindlmarkt brings thousands of visitors, 125 unique vendors, activities and entertainment together to create magic for all ages. Travel and Leisure magazine named it one of the world’s top holiday markets. (www.artsquest.org/christkindlmarkt). 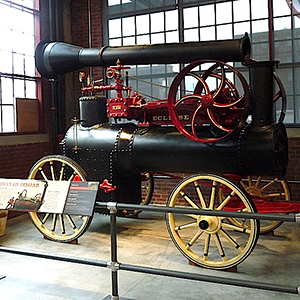 An elevated walkway, the Hoover Mason Trestle, gives visitors an overview of the historic plant. The 1,650-ft. walkway rises 46-ft. and is accessed via staircase or elevator. At one time 80 percent of the New York City skyline was created with Bethlehem Steel and their steel was used in the Golden Gate Bridge, the Brooklyn Bridge and the bridges in Philadelphia. The plant was 4.5-miles long, had five blast furnaces and 200-miles of railroad. (www.hoovermason.com).

The National Museum of Industrial History, a Smithsonian affiliate, interprets the history of American industrialization. The building, once an electrical repair shop, displays more than 200 artifacts in 4 main galleries. Highlights of the collection are mosaics of Gutenberg’s printing press and Stephen Daye’s first North American printing press and the Scalamandre “White House” loom used to produce fabric for furnishings during the Kennedy and Clinton administrations. During its heyday Bethlehem had 84 silk mills. (http://nmih.org). 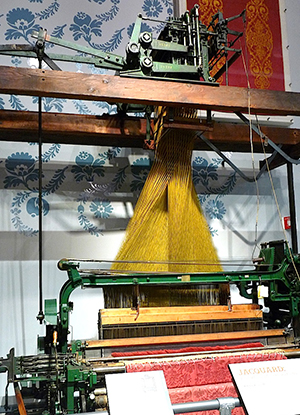 Lehigh Valley Zoo was established in 1906 as a game preserve. In 1935, the county took ownership and in 1974 augmented the 1,100-acre preserve with a 29-acre zoo. The Zoo presents the annual Winter Light Spectacular nightly until December 31st. There are more than 1-million lights and numerous events along the walking tour route. (www.lvzoo.org/event/winter-light-spectacular).

While in the area you should drive the nine-winery Lehigh Valley Wine Trail.The Valley was deemed an American Viticultural Area in 2008. The 25-acre Vynecrest Winery is the oldest in the Lehigh Valley, offers scheduled tours and is open daily. (www.vynecrest.com, www.lehighvalleywinetrail.com).

The Glasbern Inn, “Glass Barn”, is situated on 150-acres with 16-acres of hiking trails. It offers 150 luxury accommodations, the finest pasture to plate cuisine and spa facilities on a campus with rustic charm and architectural splendor. Philadelphia Magazine designated Glasbern the “Best Romantic Escape” in the region. I concur and suggest you think Valentine’s Day! www.glasbern.com

Bethlehem is a 90-minute drive from Philadelphia, a one-tank holiday treasure. (www.discoverlehighvalley.com).

Revolution in the Lehigh Valley