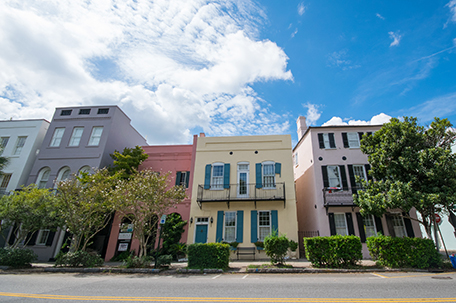 “Memory in these incomparable streets, in mosaics of pain and sweetness, was clear to me now.”

“Travel and Leisure” magazine designated Charleston, South Carolina as the number one city in the U.S., as well as the 10th best city worldwide for the sixth year in a row.

The city is a traveler’s dream with a complete range of dining experiences, entertainment venues, superior architecture, historic sites and blended cultures. Charleston was thriving years prior to the founding of the country.

South Carolina is one of the 13 original colonies, and has participated in every one of the nation’s pivotal historic events. Charleston is easily navigated, and a walk or carriage ride through the city is a layered trip through time that can be either thematic or an unmapped meander. @bulldogtours

The area that would become Charleston was a Kiawah Indian hunting ground when the first Europeans arrived in 1521 and captured 140 Native Americans, then took them back to Spain for display. In 1526, they returned and established a settlement that lasted only three years.

In 1633, the South Carolina Colony, which included both North and South Carolina, was founded by eight Lords Proprietors, who received a Royal Charter from the colony’s namesake King Charles II.

When Charleston (first named Charles Town)  was founded in 1670, African slavery was introduced into the colony. Charles Towne Landing State Park at Albemarle Point is the site of that settlement. The park offers a self-guided audio tour and a visit aboard the 17th-century replicated ship, The Adventure.

The city was fortified against the Native Americans, pirates, French and Spanish using slave labor and a moated wall with a drawbridge, which existed from 1690 until 1720.

A section of the wall can be seen on the lower level of the 1767 Old Exchange & Provost Dungeon. George Washington did not sleep here, but he did visit, and the Declaration of Independence was read to the public there.

It functioned as both a customs house and a prison and has been featured on television as one of “America’s Most Haunted Places.” Tours are offered. (oldexchange.org)

The nation’s first census in 1790 revealed that there were 8,089 White people and 8,270 Black free and enslaved individuals in the city.

Charleston has been referred to as a “perverse Ellis Island” because an estimated 50 % of the country’s enslaved Africans entered through the Port of Charleston.

Nearby Sullivan’s Island was the site of the Pest House, a building where Africans were quarantined upon arrival for up to 40 days. Gadsden’s Wharf was Charleston’s primary disembarkation point and it is the location of the future International African American Museum. (slavevoyages.org)

Once it was a brick-walled compound that housed a four-story building, slave jail, kitchen, mortuary and yard. Auctions were held here during the Civil War with the last auction being held in 1863. (oldslavemartmuseum.com)

On April 12, 1861, Confederate troops fired on and took over federally-held Fort Sumter in Charleston Harbor. This attack was considered the beginning of the Civil War.

Fort Sumter Visitor Education Center’s museum relates the story of the fort construction and the onset of the war. This is also the departure point for boat tours of the fort. Fort Sumter is only accessible by boat tour.

After the Civil War, Charleston’s devastation and poverty forced the city to rehabilitate existing structures. The result is striking historic architecture throughout the city.

Rainbow Row is a singular gem in the Historic District. It consists of 13 houses from 79-107 Bay Street, the longest row of Revolutionary-era homes in the nation, painted in pastel colors. They make a wonderful photo op.

The six-acre Battery Park & White Point Gardens is situated where the Ashley and Cooper Rivers meet the Atlantic Ocean and the views are spectacular.

There are unique oyster shell lanes and a seawall promenade ideal for sunset strolls. “Gentleman” pirate Stede Bonnet was executed on the site and he is memorialized within the park with an epitaph. (@charlestonparks)

Saving Washington: “The Forgotten Story of the Maryland 400” and the “Battle of Brooklyn” by Chris Formant is a great travel read and also a guide for a NY trip. It provides factual background on an often overlooked battle and deftly weaves into the narrative, the story of the citizen soldiers, both Black and White, who participated. The tale is told through the experiences of friends Joshua Bolton and Benjamin Wright, one of an estimated 9,000 Black revolutionary soldiers. The book has been optioned by HBO for production.

A teacher can change the trajectory of one’s life by inspiring students and instilling the joy of learning in them. Norwegian Cruise Line, as part of their North American debut, wants to honor educators by allowing people to nominate U.S. and Canadian teachers “who demonstrates a passion for spreading the joy of learning” and are “bringing joy to the classroom.”

Fifteen nominees will receive a free cruise for two, an all expenses paid exclusive invitation to an award ceremony in Seattle on May 3 and an opportunity to win $15,000 for their school. For information go to www.nclgivingjoy.com, #NorwegianJOY!