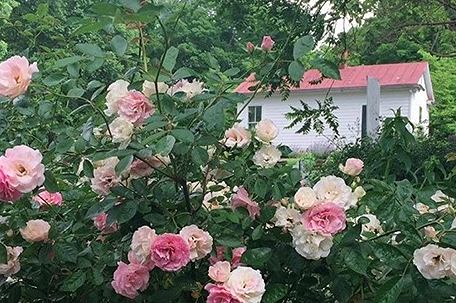 Contrary to what some might believe, Lynchburg was named after John Lynch, who took over the family’s James River ferry service in 1757. In 1786, 45 acres of John Lynch’s land was used to found the town that was chartered 29 years later.

The location of the ferry service was memorialized in 2004 with Langley Fountain, which spouts a 190-ft. stream of water into the air. (www.lynchburgvirginia.org)

Lynchburg, situated in the Blue Ridge Mountain’s foothills, is referred to as the “City of Seven Hills.” Because of its location and pre colonial settlement, the city has been at the forefront of American history from its beginnings.

The people and events involved are well documented, their paths are clearly indicated with markers and a series of unique museums and historic sites allow you to immerse yourself in the city’s legacy. Maps and guides are available at the Visitors Center.

Monument Terrace visually and physically connects the ferry landing and the Old Courthouse via Courthouse Hill. There are 132 steps and 10 landings lined with eight markers and 11 sculptures. The views are noteworthy.

The Lynchburg Museum is located inside the 1855 Greek Revival Old Courthouse. During the final days of the Confederacy, the Old Courthouse functioned as the capitol for six days. The museum provides an outstanding overview of area history from the pre-Native American contact period until the present through photographs, artifacts and documents. Highlights of the collection include personal belongings of General Jubal Early and information on the Battle of Lynchburg. (www.lynchburgmuseum.org)

African Americans inhabited Lynchburg in the 1700s. By the 1800s, their percentage of the total population exceeded 40% and by the Civil War, 20% of them was free. Slave auctions were held at 9th and Main Sts. on a large rock in front of Market House. Their labor helped make the city the wealthiest of its size in the country.

The backbone of the economy was tobacco — the first warehouse being built in 1797 — and half of the Blacks worked in that industry. The Legacy Museum of African American History interprets this history through artifacts, documents and artworks. On display is the Ann van de Graaf painting, “Lord Plant My Feet on Higher Ground,” which memorializes the Civil Rights Movement events and figures of the 60s and 70s. (www.legacymuseum.org)

Lynchburg did not fall into Union hands during the Civil War. Its major role was as a supply and hospital center, with the second largest number of Confederate medical facilities.

Point of Honor Plantation is an 1815 Federal-style mansion. A tour begins on the exterior with a banister crafted by one of the 30 slaves on the 750-acre plantation. The house has retained its 1815-30 appearance with original woodwork, paint colors and era appropriate furnishings. The original owner, George Cabell, was Patrick Henry’s doctor, and there is an outstanding medical exhibit on medicine of the times. (www.pointofhonor.org)

The Federal-style Sandusky mansion was built in 1808 on 1,200-acres and served as Gen. David Hunter’s Union headquarters June 17-18,1864. Two presidents, McKinley and Hayes, were on Hunter’s staff. A field hospital was set up in the barn and signal officers, after cutting a hole, accessed the roof. (www.historicsandusky.com)

Pierce Street Renaissance Historic District was originally established in the 1850s and become a Confederate military camp. At the end of the war, a freedman’s school was established there. In the 1870s, it became a 5-acre residential neighborhood for African Americans, housing significant individuals. The two most notable sites are the Anne Spencer House and the Dr. Walter Johnson House and Tennis Court.

Anne Spencer was a Harlem Renaissance poet who lived in the 1914 Queen Anne home for over 60 years. Her home is furnished exactly as she left it.

Here she entertained the great minds of her day including King, Cullen, Robeson, Carver and Booker T. Washington. In her exquisite garden sits a one-room cottage, Edankraal — a combination of her name, her husband’s name and an African word for enclosure. The “Prince Ebo” fountain in her garden has a sculpted iron head that was a gift from DuBois.(www.annespencermuseum.com)

Dr. Walter Johnson’s home and restored tennis court is on the same block. He was a physician, tennis player and coach. He trained Arthur Ashe and Althea Gibson among others on the court adjacent to his home.

The Cemetery Center houses the Mourning Museum, exhibiting items of mourning attire and customs. A highlight of the gallery is a portable embalming kit.

In the 1840s and 50s, those with infectious diseases were quarantined in the Pest House, where most patients died.

The two-room Pest House Medical Museum was the office of Dr. John Terrell — who was appalled at the conditions during the Civil War –instituted standards of cleanliness and lowered the death rate from 50% to 5%. Audio stations relate historic information about Terrell’s office and the quarantine room. Displays include a surgical amputation kit and operating table. The cemetery offers a complete schedule of programs. October Candlelight Tours are particularly popular. (www.gravegarden.org)

Penny Loafer, a wire fox terrier, serves as the official greeter and concierge. The 1896 William King Jr Tobacco Warehouse hosts events and is an ideal location for weddings and receptions.

Accommodations have views of the Blue Ridge Mountains, offer designer linens, and upscale amenities. A continental breakfast is served in a shoe shine box. There are two restaurants on the premises — Waterstone Pizza and Shoemaker’s American Grille — both serving culinary masterpieces.

One of the best gifts for the traveler is the gift of comfort. Arcopedico has again created a shoe that provides patented dual arch support, style, is incredibly lightweight and will make you a gift giving luminary. The Vegas is leather and is offered in two colors that will take you through daytime tours to evening adventures. arcopedicousa.com