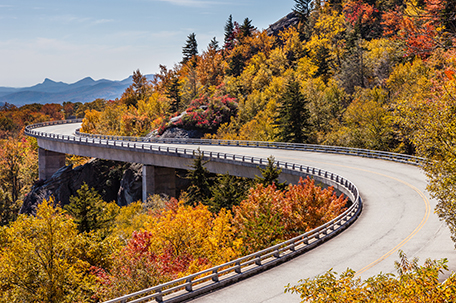 “I was with General Grant when Lee surrendered at Appomattox…..that was freedom….”

More Civil War battles were staged in Virginia than in any other state. any of those battles played out in and around the 34,000-sq. mile Blue Ridge Mountain region. The mountains are more than 1 billion years old, wind through eight states and are stunning in their majesty. Human activity has been documented in the area dating back to approximately 12,000 years ago. Native Americans lived and hunted there and considered it a spiritual center. (www.virginia.org)

The modern, 469-mile, Blue Ridge Parkway offers stunning panoramic views that are much the same as those visible in the 1800s. The 2,150-mile Appalachian Trail follows the mountains, with 226-miles in Central Virginia. More of the trail system is located in Virginia than in any of the other states. Along the parkway, there are numerous overlooks and wayside markers with geologic and historical information.  There are exit roads, so you can elect to experience only a portion of the trail. (www.appalachiantrail.org)

The surrender at Appomattox Courthouse, 75 miles east of the mountains and 18 miles east of Lynchburg, became the iconic experience representing the end of the Civil War in 1865. The terms agreed to at Appomattox that April would govern the surrender of remaining 175,000 troops of Gen. Joseph Johnston in North Carolina on April 26, Gen.Richard Taylor in Alabama on May 4 and Gen. Edmund Smith in Texas on June 2.

Appomattox County was established in 1845 from four existing counties to facilitate proximity to a seat of government. The county and the river took the name of an Indian village once located on the river’s shore. Thirty-acres were selected for a county seat with two set aside for the courthouse. Prior to then, this tiny enclave on a stage route was known as Clover Hill. In the 1850s, the town grew. In 1848, a tavern was built that would become the McLean House. (www.historicappomattox.com)

By 1860, the Black people in the county made up 53% of the population at 4,771, 171 of them freedmen. One Thursday each month was Court Day, and livestock, foods and slaves were sold adjacent to the courthouse. After the war, the vast majority of the formerly enslaved did not leave the area. Black schools were opened in 1866.

Wilmer McLean said of the Civil War that, “the conflict began in his front yard and ended in his front parlor.” Ironically, that was true. In 1861, McLean resided on his plantation with his wife and 14 slaves. Bull Run, a stream, ran through his property in Manassas and the area would be the site and namesake of the Civil War’s first major battle on July 18, 1861. Confederate Gen. P.G.T Beauregard requisitioned McLean’s home as his headquarters and his barn became a field hospital. After the area was the scene of the Second Battle of Bull Run in 1862, he moved his family 120 miles away to safer ground in Appomattox Court House. On April 9, 1865 McLean’s home was selected for the meeting of Ulysses S. Grant and Robert E. Lee to negotiate a surrender.

At 8am on April 9,1865, Lee found his escape route blocked by General Armstrong Custer. That afternoon he surrendered to Grant. The path of Lee’s retreat can be followed on a driving tour that interprets the action between April 2-9. There are more than 25 markers and audio kiosks with maps, photographs and information. The sites of Lee and Grant’s headquarters are marked, as well as the site of the apple tree under which Lee waited for an initial response from Grant.

Hannah Reynolds, an enslaved woman, was the only civilian wounded in the Appomattox battle. She was hit in the arm through a wall on April 9 and died three days later. The site of this incident, a slave cemetery and a marker about Joel Sweeney, who taught to play the “banjar” by a slave and went on to international fame, are also part of the history found at the location.

Appomattox Court House National Historic Park is a reconstruction of the village with eight tourable locations including the original 1852 Meeks Store, 1865 Woodson Law Office and reconstructed slave quarters. The Visitor Center is inside the restored courthouse and museum. Tours begin with the 15-minute orientation video. A display — titled“Enacting Freedom”– relates the story of the 5,000 Black soldiers at Appomattox. Of the seven Black units, the 8thRegiment was from Philadelphia. Three units trained at Camp William Penn. Thirty-three percent were born free in the North, 10% freedmen from slave states and 50% were escaped slaves.

Lee asked Grant to write the terms, selected the surrender site and arrived around 4pm. The McLean parlor is set up as it was in 1865. After the surrender, a Pennsylvania band played “Auld Lang Syne,” but Grant banned festivities. The Confederates were compelled to surrender their flags. It took 6 hours to stack their arms.

The exhibit in the original 1819 Clover Hill Tavern depicts how it was used to print the parole papers needed by the Confederates to travel. Thirty-thousand passes were printed by April 11. Lee recruited Blacks on March 23, 1865 in General Order #14, offering them freedom and undisturbed residence. Thirty-nine paroles were issued to African American Confederates.

The American Civil War Museum tells the story of the war through a series of thematic galleries using audio, video, memorabilia, photographs, artifacts and interactives. They succeed at relating both the African American and Confederate stories holistically. Highlights are an unbiased narrative about Black participation in the Civil War and the sword and uniform worn by Robert E. Lee at the surrender. In a case in the center of the final gallery is displayed a lone chair belonging to Hannah Reynolds; she died a free woman. (www.acwm.org)

Bethlehem, Pennsylvania is the ideal destination for the holidays with a renowned Christmas Market, gaily decorated streets and loads of activities. This year,  add “Purseonality,” an exhibition of more than 500 handbags,  curated by collector Ilene Hochberg Wood and on display at the Kemerer Museum of Decorative Arts. (www.historicbethlehem.org, #kemerer-museum)