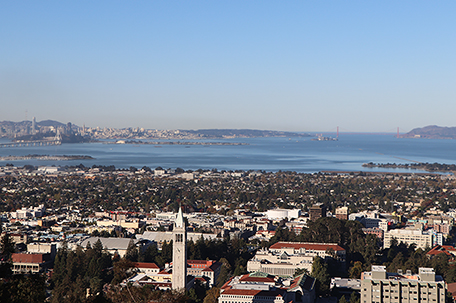 Northern California was home to nearly 300,000 indigenous people prior to the arrival of Russian and Spanish Europeans in the 1700s. The major tribe being the Ohlone, also known as the Costanoan. European arrival, the establishment of missions and the Gold Rush in 1849 caused the native population to dwindle from approximately 300,000 to less than 25,000 and to become marginalized in northern California.

Situated bayside, the institution is regarded as a top public university in the country based on academic excellence, impressive faculty and reputation as a liberal bastion of free and innovative thinking. It boasts 22 Nobel Laureate professors and 30 Nobel winning alumni and has won a greater number of Nobel Prizes than any other public university. Nobel prize winning faculty members are given a designated parking space. (www.berkeley.edu) 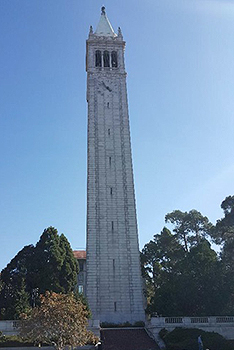 The most expeditious way to learn about the university and aspects of the region is to take a guided, free campus tour. Tours are offered daily and reservations are recommended.

They leave from the Koret Visitor Center, where displays and interactive exhibits provide an orientation. There are seven sites that you must see on the campus tour. (www.Visitberkeley.com)

Berkeley’s Campanile is the institution’s iconic symbol and the third highest bell and clock tower worldwide.

A 360-degree observation deck provides outstanding views of the Golden Gate Bridge and the surrounding area. Concerts are given daily. 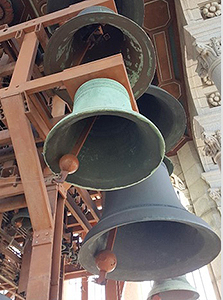 Exterior bulletin boards showcase current copies of newspapers. The menu focuses on foods that are made with sustainable, organic and local ingredients.

In 1901, The Hearst Museum of Anthropology was founded to study international cultures. The 3.8-million object permanent collection covers two million years and six continents. The collection includes 400,000 Native American artifacts inclusive of 12,000 Native American bones the ownership of which is currently steeped in controversy. (www.hearstmuseum.berkeley.edu)

Valley Life Sciences Building’s first floor dinosaur exhibit, though small, is worth a visit. The focal point of the displays of fossils is a mounted Tyrannosaurus Rex.

People’s Park, the site of Bloody Thursday, is one of the most famous campus locations. On May 15, 1969, then Gov. Ronald Reagan ordered the highway patrol and city officers to clear the park because the students and community members there were “communist sympathizers, protesters, and sex deviants”. This action led to a riot in which 239 people were injured.

In 1964, the Free Speech Movement (FSM) was born here as an outgrowth of the Civil Rights Movement and Vietnam War protests. Berkeley students protested the imposition of an on-campus protest ban and demanded free speech and academic freedom. The main protest site was Sproul Plaza and Mark Savio was an acknowledged leader. Students were suspended and arrested in efforts to stop the protesters. 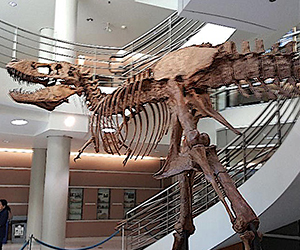 Berkeley was incorporated in 1878 after having been known as Ocean View. The city, like the university, was always innovative. The first lie detector machine was used there in 1923 and it was the site of the first bike patrol. There are specialized tours that provide background information. A Berkeley Historical Tour App is available at www.telegraphtour. The self-guided Berkeley Pathways Tour leads you through 137 charming footpaths and the downtown Berkeley Poetry Walk displays three tons of poems inscribed on 128 cast-iron, 55-pound panels. Curbside panels are two feet square.

Check out what is playing at La Val’s Subterranean Theater, exactly the type of theatrical venue one would expect in Berkeley. The ensemble, Theater Lunatico, is dedicated to fostering unique opportunities for women. The nontraditional casting is both thought-provoking and an impetus for experiencing classics in a new way. ([email protected])

The first gourmet coffee shop in the nation was Peet’s Coffee, still a city staple. Alfred Peet opened Peet’s in 1966 as his response to the poor quality of American coffee. (www.peets.com)

The Free House Restaurant’s main dining room was a site of Mario Savio’s meetings in the ‘60s. The restaurant is decorated with pictures from the FSM, dark woods and a central communal table conducive to conversation and debate. Creative pub fare is served both inside and outdoors. (www.berkeleyfreehouse.com)

Skates on the Bay is located in the Berkeley Marina. The service is impeccable, and the menu consists of the freshest seafood possible. As you dine you are treated to unmatched views of the sunset, San Francisco Bay and the Golden Gate Bridge. (www.skatesonthebay.com)

Situated in the 52 acre Berkeley Marina and close to the university and downtown is the DoubleTree by Hilton Berkeley Marina. The 378 rooms have all the deluxe amenities including Sweet Dreams by Doubletree bedding and the Fitness Center outfitted with Precor cardio equipment. Rooms have views of the bay and the San Francisco skyline. A complimentary shuttle is available to take guests to nearby locations. Special offerings, information and booking details are available online. (www.doubletree3.hilton.com)

The Grommet is the perfect place to purchase a unique gift for a traveler. Over a 10-year period The Grommet has launched a series of creative products with many going on to consumer popularity. You can view and purchase them by ordering online or from a catalog. (www.thegrommet.com)

Comfort is one of the best gifts for a traveler and Arcopedico handmade shoes provide just that. They are very light, have techno-elastic uppers for foot perimeter ease and perfect weight distribution based on an anatomic design.  Created by a doctor, they offer a twin arch support system to align the vertical column and facilitate hours of wear. They make a great Christmas gift. (www.arcopedico.com/en)