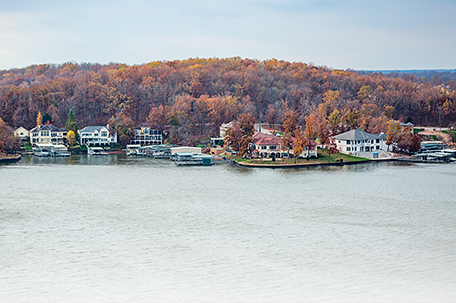 ABOVE PHOTO:  Lake of The Ozarks Missouri  (Photo by Jon Manjeot/shutterstock)

Reuben S. Branson’s general store, followed by a post office, opened in 1882 and became the namesake of the city. Tourism took off in Branson in 1907, when William Henry Lynch’s “The Shepherd of the Hills,” a novel about life and the culture of the Ozarks, became a bestseller. It inspired people to travel to the area. In 1913 the building of a dam created Lake Taneycomo. Forty-six years later, Table Rock Dam was completed along with Table Rock Lake. Table Rock boasts an 800-mile shoreline and offers a menu of water-based activities. Branson’s lakes are renowned for the best of North America’s freshwater fishing with greater than 200 species including bass, catfish and trout. Visit: @explorebranson

Visitors can ride an amphibious 1942 World War II DUKW on a lake and city tour. During the land portion of the ride, there are splendid views from a mountaintop that was a Native American ceremonial site, and a tour of an outdoor military museum that showcases war vehicles. Visit: bransonducks.com 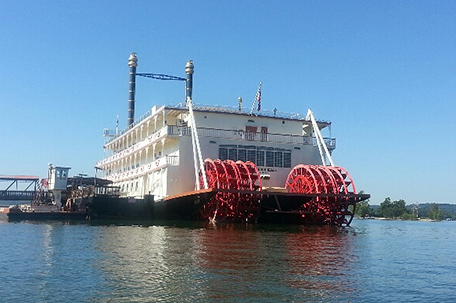 Cruise the waters of Table Rock Lake in the authentic paddle wheel boat, the Branson Belle. On the dinner and lunch cruises, guests experience a meal, a show, lake views and time to explore the ship. The dinner cruise is an excellent way to end an evening. Visit: showboatbransonbelle.com

Branson has developed into an affordable family and entertainment destination. There are more stage shows than there are on Broadway and numerous food options, from booths to fine dining, and great shopping for upscale and handcrafted items. The $400-million Branson Landing is the premier outdoor mall for shopping and dining and a stunning lighted fountain show.

The façade of the Titanic Museum is that of the ship and iceberg, indicative of the fact that this is an immersive museum. Your adventure begins before you enter as visitors “become” one of the people who sailed on the ship. The tour relates the tale of the doomed ship through personal stories, 400 authentic artifact and interactive exhibits. Highlights of the collection are the only surviving Bible, Mrs. Astor’s lifejacket, and the only remaining first-class menu. A display tells the story of Juliette Marie LaRoche, a Frenchwoman who married a Haitian. The couple and their two children were aboard the ship. Mr. LaRoche perished. The tour is approximately 90-minutes and at the end you discover whether or not you survived. Visit: titanicattraction.com 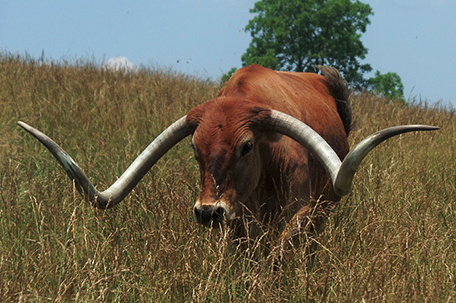 Dolly Parton’s “Dixie Stampede” dinner show is a consistent crowd pleaser. It is filled with song, dance, comedy, acrobatics and trick riders on 32 horses. A benign competition between the North and South plays out with friendly cheers, and the evening culminates in a dazzling display of America’s spirit and solidarity. dixiestampede.com

The Four Track Family Fun Parks are located in Branson, all within walking distance of each other.  The first park opened in 1981 as a Go-kart track and has grown to include a laser maze, mini-golf, bumper cars and a number of other activities. The newest attraction is a Ferris wheel that was relocated from Chicago in 26 semi-trucks and completely refurbished. The wheel is 150-ft. tall, takes 7.5-minutes per revolution, weighs 450,000-pounds and is adorned with 16,000 lights. Visit: Bransontracks.com

If you are looking for anything at all you can locate it at Dick’s 5&10. The store is a 10,000-sq. ft. destination featuring more than 75,000 items. This is a perfect place to buy gifts, souvenirs and memorabilia. Also displayed are the owner’s private collections of model airplanes, arrowheads, cap guns and autographed baseballs. It is not to be missed. Visit: Dicksoldtime5and10.com 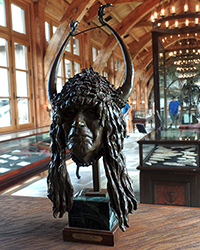 The founder of Bass Pro Shops purchased Dogwood Canyon to preserve it for posterity in 1990. A restaurant made from an old barn and artifact exhibits are in the Visitor’s Center. Narrated riding tours of the canyon showcase Native American sites, a covered bridge, a rustic chapel, a treehouse built by Tree Masters and 32 springs. The area is breathtaking.

Hugo and Mary Herschend purchased Marvel Cave in 1949 and improved the existing cave tours. They realized visitors wanted additional attractions while they waited for their tour so they created Silver Dollar City, originally one Ozark community street filled with craftsmen and stores, in 1960. It has grown and is now the largest family owned theme park in America. Visitors can select from more than 40 rides, craft demonstrations, culinary classes and performances.  Outlaw Run rollercoaster was named “Best New Ride of 2013,” and in 2015 it was entered into the Guinness World Records as the first and only triple-looping, double-barrel wooden coaster.

The Harlem Globetrotters are part of the Herschend Silver Dollar City family. Visitors should check their schedule to see if they will be performing there. Visit: Silverdollarcity.com 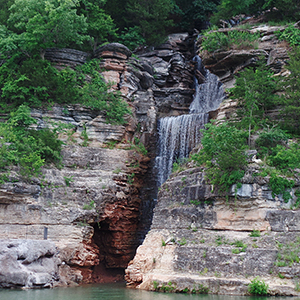 An outstanding lodging choice is the Lodge of the Ozarks. Located on the “76 Strip,” it is within a short driving distance of the main attractions. The Lodge offers all the standard amenities, including free WIFI, indoor pool, free parking, reunion facilities, concierge services and exemplary hospitality. Visit: lodgeoftheozarks.com

Branson offers thrills around every corner for all ages and ability levels. No matter what you like to do you can find your bliss in Branson. Explorebranson.com

I wish you smooth travels!  phillysmoothtraveler.blogspot.com

This year’s program will kick-off on August 20th in Fort Monroe, Virginia with African Arrival Day – an event that will shine a spotlight on Virginia’s first African peoples, allowing visitors to travel through history and explore the lives of colonial Americans first-hand. The dynamic history of America’s colonial past will be told through diasporic themed films, authentic African performances, onsite interpreters and living history guided tours, musical acts and scholarly conversations. There will also be a number of interactive site tours around the scenic Continental Park.