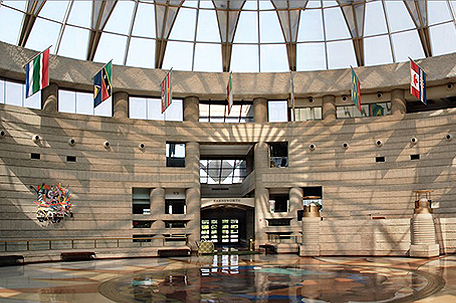 “I want to make it clear that the black race did not come to the United States culturally empty-handed. The role and importance of ethnic history is in how well it teaches a people to use their own talents, take pride in their own history and love their own memories.”

The nine Muses were daughters of Zeus, King of the Gods, and Mnemosyne, “Memory.” The word “museum” originated from the Greek “mouseion” meaning place of the Muses. They represented the arts and served as inspiration for artists.

Their temples were primarily places of contemplation and intellectual discussion. In 1925, Leonard Woolley, while on a dig in Iraq, unearthed the oldest museum in the world, the Neo-Babylonian Empire museum of Princess Ennigaldi-Nanna, built in 530 BC.

The structure and variety in ages and types of objects were baffling until they discovered clay cylinders, inscribed in three languages, that functioned as labels for the more than 1400 artifacts.

Now, more than 2,500 years later, mankind continues to seek to preserve, interpret, clarify, promulgate and present the past. Three years after the Civil War, Hampton College Museum was established as the first African American museum in the United States. By 1950, there were approximately 30 such institutions.

Today there are numerous museums dedicated to relating the history or individual aspects of the African American cultural odyssey in this nation. I have compiled a list of ten museums that I feel you should visit.

This month is an excellent time to actively commemorate the legacy. This list is by no means exhaustive or ranked in any order. I encourage you to find favorites of your own.

Fort Monroe National Monument and Museum is on the site of the August 1619 landing of the first shipload of enslaved Africans. Ironically it was also the location of Maj. Gen. Butler’s refusal to return fleeing slaves invoking the argument that they were contraband of war and could be seized to keep them from aiding the Southern war effort.

The museum interprets these events, as well as displays Jefferson Davis’ cell. Fort Monroe became known as Freedom’s Fortress and in 2011 President Obama designated it a National Monument. (www.nps.gov/fomr)

Niagara Falls Underground Railroad Heritage Center, located inside the 1863 US Custom House, concentrates on the personal stories and history of the Underground Railroad in Niagara Falls through a permanent exhibit, “One More River to Cross.” The museum is totally immersive and tours are self-guided. Visitors walk over a replica of the bridge to Canadian freedom. (www.niagarafallsundergroundrailroad.org)

Baltimore’s National Great Blacks in Wax Museum, the first dedicated to African Americans in the nation, was founded in 1983. The 35 galleries are both chronological and thematic and take you from African cultures to modern trailblazers. (www.greatblacksinwax.org)

The National Center for Civil and Human Rights in Atlanta’s current exhibit is “Voice to the Voiceless,” is in keeping with King’s legacy. The highlight of a visit is The Morehouse College Martin Luther King, Jr. Collection with personal papers and effects displayed in rotation. (www.civilandhumanrights.org)

In 2004 the National Underground Railroad Freedom Center opened in Ohio to honor those who worked to abolish slavery. The museum also details information on modern slavery and those who continue to fight against it.

The museum is near the Ohio River used by the enslaved to escape to freedom. An authentic slave pen is the largest artifact and the jewel of the collection. (www.freedomcenter.org)

The Mississippi Civil Rights Museum showcases the years 1945-76 in 8 galleries encircling a courtyard, called “This Little Light of Mine,” featuring a glowing sculpture. Galleries are complete with texts, videos and photographs.

The most dramatic display is a film on Medgar Evers that ends with a display of the Enfield rifle used by Byron De La Beckwith in the murder. (www.mcrm.mdah.ms.gov)

Charles H. Wright Museum of African American History has more than 35,000 exhibits and offers more than 300 events annually. The museum houses the Blanche Coggin Underground Railroad Collection, the Harriet Tubman Museum Collection, and the Sheffield Collection about Detroit’s labor movement in Detroit. The current exhibit — “Queen” — is from the personal collection of actor CCH Pounder of artworks by Africans, African-Americans, and Diaspora artists. (www.thewright.org)

Music has always been an important part of our story and a good place to delve into its roots and surrounding culture is Clarksdale, Mississippi’s Delta Blues Museum. Established in 1979, it was relocated to a 1918 freight building in 1999.

The National Memorial for Peace and Justice is the first memorial dedicated to Black people who suffered through systematic violence and lynching.  The memorial itself contains over 800 steel steles with 4,400 names of victims of racially motivated lynching between 1877 to 1950. Self-guided tours include gardens, sculptures and interpretive panels. (www.museumandmemorial.eji.org/museum)

The façade is covered with 3,600 colored panels. The seven-level facility is 60% underground and tours begin with “Slavery and Freedom 1400s” and proceed chronologically and thematically. The experience is personalized with displays of items such as Baldwin’s passport, Nat Turner’s Bible and a small pair of shackles worn in Africa as protection against slave catchers. (www.nmaahc.si.edu)

Make a February pledge to visit at least two museums this month.