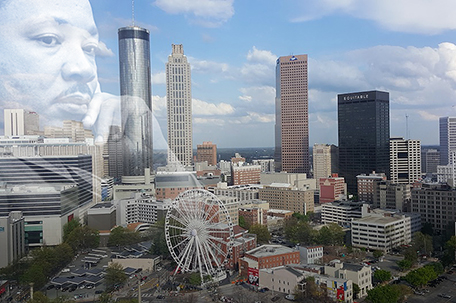 April 4, 2018 marked the 50th anniversary of the assassination of Dr. Martin Luther King, Jr. in Memphis. The single shot did not erase the legacy of the dreamer or the end of the dream. Although he traveled worldwide, Georgia was his home and has embraced him as its most honored native son.

Visitors can trace his life from birth to burial, his philosophical and ideological stances through public speaking events and his evolving civil rights strategies through both open and clandestine planning locations.

Best of all, Georgia’s “Footsteps of MLK” tour includes sites where we catch glimpses of King the man, the husband and the father. (#exploreGeorgia) 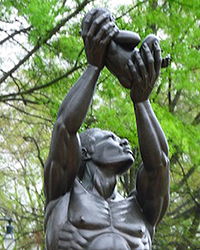 Atlanta’s Martin Luther King, Jr. National Historic Site, established in 1980, is the natural starting point. The National Park Visitor Center (NPVC) presents a film, “The Last Days of Dr. King,” and has a small museum with a visual chronology, videos and a diorama of the Edmund Pettus Bridge march.

The construction of Ebenezer Baptist Church was completed in 1922. In the 1960s, King was co-pastor with his father, the Rev. Martin Luther King, Sr. In 1974, a gunman killed his mother as she played the organ in the church. The church has been restored to its look during the 1960s. King’s robe, sash and other biographical items are on view at the King Center. Outside of the NPVC stands the “Behold” monument dedicated to MLK’s legacy. Entry to all sites is free. (#footstepsofMLK) 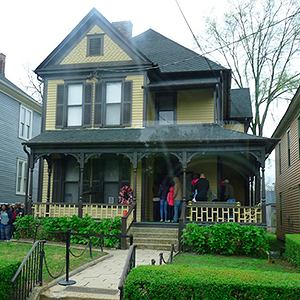 King was born on January 15, 1929 in an 1895 Queen Anne home near the church and lived there until 1941. The home has been restored to the look of his childhood with assistance from family members.

Thirty-minute guided tours are limited and guests must sign up in the visitor center. The area immediately around the home, declared a Preservation District in 1980, interprets young King’s neighborhood. (www.nps.gov/malu/planyourvisit/birth_home_tours)

King’s 1.5-mile neighborhood, Sweet Auburn, dates from the late 1800s and is a National Historic District. It remains largely residential and wayside markers provide historic context. The 1894 Romanesque Revival historic Fire Station No. 6 was the city’s first integrated fire station and one of the first of eight original stations. The firemen gave King a hat. His first career choice was fireman.

The Georgia marble crypt of Dr. and Mrs. King, surrounded by a reflecting pool, is the heart of the King Center. King’s body was moved there in 1970 and Mrs. King was buried beside him him after her death in 2006. A park was constructed around the tomb in 1976 and an eternal flame reflects the fact that MLK is a continuing symbol of the quest for universal civil rights and the ongoing dream. (www.nps.gov/malu/index) 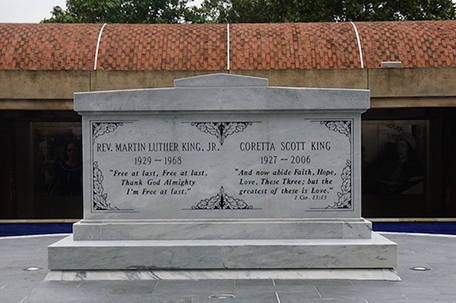 Auburn Curb Market was built in the 19th-century. It was located at the center of the city and was where farmers brought their goods to sell. In 1924, Blacks were expelled from the market and forced to sell their goods on the curb outside. People began to buy curbside because the prices were cheaper. lacks returned in the 1940s. The market was renovated in 2012 and is filled with eclectic vendors and restaurants.  (www.thecurbmarket.com)

Civil Rights Tours Atlanta leaves from the Martin Luther King, Jr. National Historic Site and takes you through the history of Atlanta and the Civil Rights Movement. The guide, Tom Houck, youngest member of the Southern Christian Leadership Conference executive staff and driver and assistant to Dr. King, is extremely knowledgeable about the locations and events and shares his invaluable personal insights.

Highlights of the tour include the Freedom Houses where Student Non-Violent Coordinating Committee (SNCC) workers took R&R, and Wheat Street Baptist Church — seen in Tyler Perry movies and the movie “Selma” — and the Peacock Club. Martin and Coretta had date nights at the Peacock Club, which, because it is used in movies, looks the same on the exterior.

King’s office was in the Prince Hall Masonic Building. It had no windows, numerous bookcases and a large picture of Gandhi. A bronze sculpture of Martin Luther King, Jr. was dedicated in 2017 on the grounds of the Georgia State Capitol. The statue stands 8-ft. on a 36-in. pedestal.  (www.civilrightstour.com) 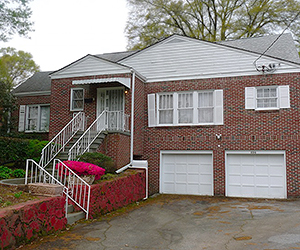 The Kings lived in a house at 234 Sunset Street from 1965 until Coretta’s move in 2005. There were three undertakers living on the block. MLK referred to it jokingly as “death row.”

This is the home where personal friends and families gathered to mourn in 1968 and where the King children grew up.

The 25-acre South-View Cemetery was established in 1886 by founders who had once all been enslaved. In 1968, King’s body was interred in South-View Cemetery in a family plot. Prior to being moved in 1970, his tomb was fired upon and a bullet hole can still be seen in the rear of the tomb. Many notable people are buried here and there is a 13-stop cellphone tour.  (www.southviewcemetery.com)

Brothers Robert and James Paschal established Paschal’s in 1947 as a small restaurant specializing in Southern food. Initially, because there was no kitchen, food was cooked at Robert’s home and Robert’s wife brought it to the restaurant by cab. In 1960, they opened La Carousel Lounge where the biggest African-American performers played. In 1968, they constructed a motor hotel with luxurious accommodations. Robert died in 1997. James headed the company until his death in 2008. The restaurant was the unofficial headquarters of the movement. MLK held meetings on the premises and the leaders often stayed at the hotel. The restaurant is at a new location, but it continues its tradition of excellent service, delicious Southern cuisine and star power. Chris Rock and Stevie Wonder have reserved tables.  (www.paschalsatlanta.com)

Atlanta’s National Center for Civil and Human Rights opened in 2014 with a focus on the state of and fight for civil and human rights in America and internationally. Exhibits on the first floor guide you through segregation and into the struggle to overturn it. The exhibits are interactive and engaging. King’s papers are rotated every four months in a special gallery.  (www.civilandhumanrights.org) (#Livethelegacy)