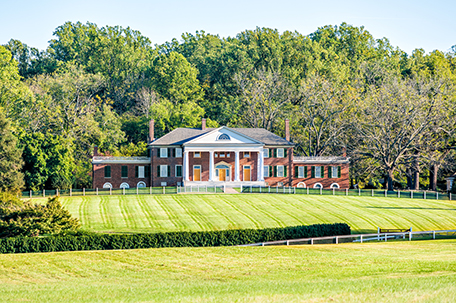 I have found that the way to truly begin to understand the private side of an individual’s personality is to visit their home and peer into their personal spaces. residential homes are very popular in this respect. The most visited of these homes is Mount Vernon, residence of George and Martha Washington. Mount Vernon is located in Virginia, 16 miles south of Washington, DC. Approximately 90 miles south are the homes of the third and fourth presidents, Thomas Jefferson and James Madison. Their plantations — Monticello and Montpelier — are a few miles from Charlottesville and within close proximity of one another. (www.visitcharlottesville.org).

Both estates strive to present the personal and professional lives of these men as well as the enslaved people who were also residents. The goal of both sites is to alter the prevailing narrative and depict the slaves as individuals with families, friends, desires, personal spaces and separate lives. (www.virginia.org).

Monticello, the more famous of the two, was the home of Thomas Jefferson for 20 years.. Jefferson owned several properties and approximately 600 slaves. Most worked at Monticello. Plan to spend several hours visiting all the sites. Tours begin with an orientation film and proceed into the gallery to view four exhibitions. Shuttles take you around the grounds and to the mansion. (www.monticello.org). 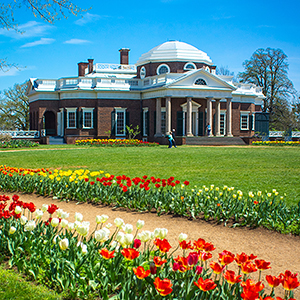 Most people are familiar with the house because it is depicted on the nickel but they have little idea of the intricacies of its design. The interior of the home is 90 percent original, as is30 percent of the glass and 60 percent of the furnishings. Slaves including master carpenter John Hemings completed much of the building.

Your tour begins in the two-story entry where Burwell Colbert, the enslaved butler, greeted guests. It is filled with artifacts, many of them of Native American origin. Antlers are the only original item;the remainder are recreations made by descendants of the original artisans.

Jefferson read and wrote in seven languages and his library held over 700 books. The displayed books are the same titles and editions as the originals. Jefferson’s bed was situated in an alcove. On one side was his study, on the other, his dressing room. 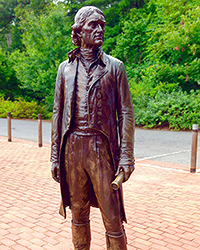 He died in this room. In 1998, DNA linked Sally Hemings, an enslaved woman, to the Jefferson family. It is believed that he fathered her six children. Currently, they are excavating a windowless room that they believe was hers. A Hemings family tour is offered. (www.home.monticello.org).

The house was designed with the enslaved workers all connected along passageways. The most interesting areas are the Wine Cellar, the cook’s room and the kitchen, which is said to have been the best-equipped kitchen in America.

Be certain to tour Mulberry Row, where free and enslaved craftsmen lived, and the slave cemetery. Your final stop will be Jefferson’s grave in the family cemetery.

Montpelier was the home of James and Dolley Madison after his presidency. The estate had been in his family since the 1730s. After his birth in 1751, his father built the current house. Rooms were added to the home, and later he added wings on either side. Madison and his wife, America’s first First Lady, would live there until his death. 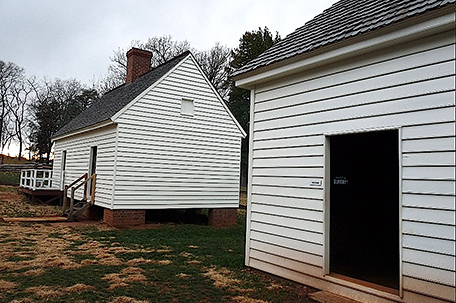 Dolley Madison was a Quaker who first wed John Todd, a lawyer, at the age of 22. They resided at 4th & Walnut in Philadelphia from 1791-93. In 1793, Dolley’s in-laws, husband and baby died. In 1794, Aaron Burr introduced Madison to her and later that year they wed. Tours of the Dolley Todd Madison House are offered seasonally. (www.phlvisitorcenter.com/attraction/todd-house). 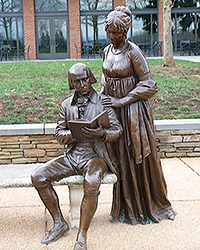 James Madison was the 4th President of the United States. Known as the “Father of the Constitution”, Madison was also the architect of the Bill of Rights and owner of a plantation with more than 275 slaves. Touring Montpelier is a totally unique experience because it deals with all of the historic contradictions in our culture. Madison and other founding fathers set forth the ideal of freedom for everyone, but slavery at its height was a more than $3-billion industry and every state benefited from it. In most cases, profit trumped moral imperatives.

There are two exhibits and an introductory film inside the Visitor’s Center. Grills Gallery features items connected with the Madisons, including Dolley’s engagement ring. The Center’s Exchange Café offers a wonderful dining experience. Their barbecue is ranked #1 in the area and 30th nationwide. Everything is made using fresh local produce.

The home has been architecturally restored and it is exciting to see and learn the history. Madison retired here in 1817. By the 1830s, Dolley’s bedroom was in the left wing and Madison, who was ill, slept in a room behind the dining room. He became paralyzed and was attended by Paul Jennings, a slave, for many years. He died in 1836, the last of the “Founding Fathers.” Dolley sold Jennings after Madison’s death to Daniel Webster. Webster allowed him to purchase his freedom. Jennings wrote a book about his experiences entitled, “A Colored Man’s Reminiscences of Madison.”In 1844, Dolley sold the 2,650-acre estate for $35,000 to pay debts. She died in 1849 and was buried in Montpelier in 1858. 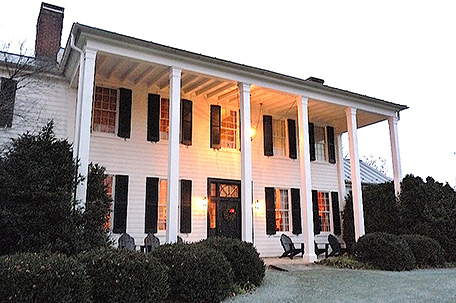 The story of slavery at Montpelier and in society is told in the best exhibit I have seen. Two cellar galleries interpret the private and public lives of the slaves in state-of the-art displays. “The Mere Distinction of Colour” is based on oral histories of Montpelier’s slaves. Uniquely the film is presented as shadows on the walls evoking the ephemeral existence of the enslaved. A slave cemetery and six cabins dating from the 1700s are featured on the tour. Additional areas on the tour include walking trails, gardens, 200 acres of Piedmont Forest and archeological sites. (www.montpelier.org).

The George Gilmore Cabin is located nearby. He was a slave born on the Montpelier plantation. He purchased 19.11-acres of land and his cabin is the nation’s first Freedman’s site. Montpelier’s 1910 Train Station has been restored to its Jim Crow-era appearance. Displays are based on oral testimony by area residents.

The original 3,000 acres that is now the Clifton Inn belonged to Peter Jefferson and later Thomas Randolph, Jefferson’s son-in-law. The building was a warehouse and the stone foundation is part of the hotel’s main house. This historic property features luxurious accommodations in the main house and in the dependencies. The restaurant offers gourmet cuisine and exemplary service. This is perfect for meetings, a romantic getaway, a retreat or reunion. (www.clifton-inn.com).