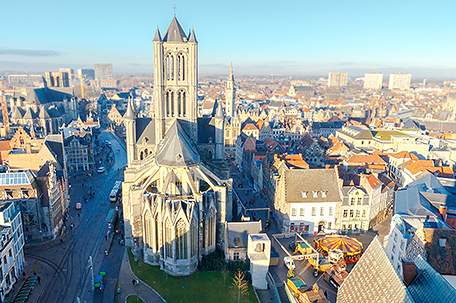 ABOVE PHOTO:  Ghent, Belgium, View of the city and the St. Bavo Cathedral.  (kavalenkau / Shutterstock.com)

Fifty-two miles from Antwerp is another of Flanders most impressive cities, Bruges. The city was honored internationally in 2002 when the Historic Center of Bruges was inscribed on the list of UNESCO World Heritage Sites based on its ability to maintain and showcase historic structures within a modern context. In the same year Bruges was named as the European Capital of Culture. “The Venice of the North’s” rare beauty is best seen on foot at a meandering pace or by boat on one of its numerous canals.

Julius Caesar ordered the building of fortifications in the area in the First century BC to thwart raids but the earliest documented evidence of the city dates from 851. It was chartered in 1128 and entered a golden age, quickly becoming a flourishing port and a wealthy trading city. The prosperity ended when the river began to silt up in the 15th-century and many merchants moved to Antwerp. Bruges was virtually unharmed during both World Wars, which led to  it becoming a tourist favorite and the setting for a number of movie and television productions.

The cobblestone 2.5-acre Market Square is the core of Bruges’ historic district and the best place to begin a tour. There you can board a tour bus, take a carriage, embark on a walking tour or sit in a café and soak in the atmosphere. Two sides of the square are filled with guild houses that are faithful reconstructions of those of the 14th-16th-centuries. 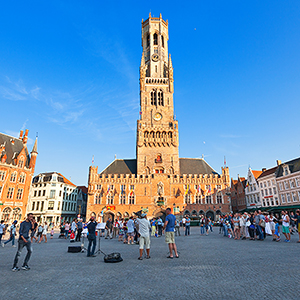 On the southern side of the square sits the Bruges Belfry, the tallest structure in the center. It dates from the 12th Century, took three centuries to complete, and houses 47 bells. Visitors can climb the 366 steps to get a panoramic view. The belfry stands 272-ft. and leans 3.5-ft. A highlight of a tour includes he Treasury Room where a box held the city’s documents. The mayor and nine officials held individual keys to the box and all had to be present to open it.

Burg Square is situated near Market and it is there that city began when Count Baldwin erected Grafenburg, a fortified castle, to protect against Viking incursions in the Ninth Century. The castle no longer stands but other important buildings remain. The Burg is an architectural snapshot with buildings representing the Romanesque, Gothic, Renaissance, Baroque and Classical styles.

The construction of the Gothic Staduis, Town Hall, began in 1376. The stunning interior has a burnished vaulted ceiling with polychrome ribs. The carvings and paintings arrayed around the room are breathtaking. This is one of the oldest town halls in the Low Countries.

Adjacent to the hall is the Romanesque-Gothic Basilica of the Holy Blood dating from 1150. Golden statues grace the façade while a Romanesque chapel on the lower level and a Gothic upper level chapel are connected by a stone stairway. According to legend, Joseph of Arimathea wiped the blood from Christ’s body and kept the cloth. It remained in the Holy Land in a rock-crystal vial until the Second Crusade when a count brought it to Bruges and placed it in the chapel. The Procession of the Holy Blood has been held on Ascension Day since 1291.

Visitors can experience the golden age of Bruges at the Historium. Tours walk you through a day in 1435 Bruges with all the attendant sights and smells. The experience ends with in a museum gallery and an opportunity to obtain a panoramic view. Historium.be

The city of Ghent, 27 miles from Bruges, is another of Flanders’s gems. The city is located at the juncture of the Scheidt and Lys Rivers and is named after the Celtic “ganda,”meaning confluence. The area has been populated since the Stone Age, but evidence points to a permanent settlement in 406 and Bishop St. Amand founded St. Bavo’s Abbey in 630.  The city grew so rich during the Middle Ages as a textile manufacturing and trading center that in 1180 Philip of Alsace erected Gravensten Castle, the Castle of the Counts, to exert control over the area. The University of Ghent was inaugurated in 1817 and has influenced this charming medieval city intellectually and culturally. visit.gent.be/en

Tours of one of the oldest castle in the country, the Castle of the Counts, reveal Middle Ages military architecture. It was constructed with a dungeon and a moat, crenellated walls and towers.

St. Bavo’s Cathedral is a highlight of a trip to Flanders. The cathedral is on the site of several earlier constructions dating from 942 and evidence of a 12th-century Roman nave can be seen in the crypt. The Gothic building was constructed from the 1300s to 1559 and became a cathedral shortly after. The church is a virtual gallery of ecclesiastical art displayed throughout.

The most amazing artworks in the cathedral are the 1432 Flemish primitive polyptich, Adoration of the Mystic Lamb, by Hubert and Jan van Eyck and the 1623 Entry of St. Bavo into the Monastery by Rubens. The 12-panelled Mystic Lamb, also known as The Ghent Altarpiece, is the most stolen artwork in the world. In 1934 one of the panels was stolen, it was never recovered and has been replaced with a replica. The entire piece was stolen by Napoleon, returned and then taken by the Nazis and returned by the Monuments Men. It is currently undergoing restoration in the Museum of Fine Arts. Visitors can watch the restoration and the authentic work in St. Bavo’s.

The Belgian waffle was created six generations ago at Max. The restaurant continues to make them using the family recipe. Don’t leave Ghent without a taste.

Ghent is lovely by day but by night it becomes a lustrous jewel with special architectural illumination until midnight each evening. It is one of the most romantic cities in Europe.

Both Bruges and Ghent offer great value for your money, English is widely spoken and there are nonstop flights from Philadelphia. visitflanders.com