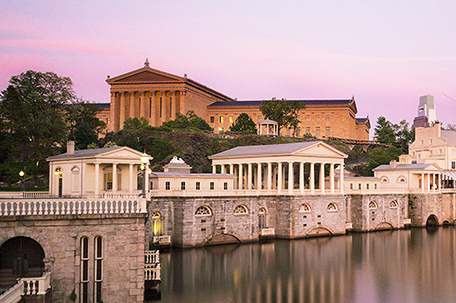 Philadelphia receives millions of visitors annually and is one of the 10 most visited cities in the United States. People from around the world come for the historic sites and the dazzling array of restaurants, accommodations and activities.

Residents of the city often find themselves called upon to host out of towners wishing to experience the “most historic mile in the country” and run up the Philadelphia Art Museum steps. Anyone who lives here knows parking can be a hassle and getting around can be a challenge.

There is a quick, easy and inexpensive alternative to driving or using traditional public transportation — the Philly PHLASH® Downtown Loop.

The PHLASH® has a total of 18 stops, all situated at or near the most important attractions, as well as the Zoo and Please Touch Museum Loop that makes stops at these two attractions in Fairmount Park. The bus operates daily service, 15 minutes apart, from 10 am to 6 pm, May 1 to September 2. Rides are $2.00 each, $5.00 for a one day pass and $7.00 for a 2-day pass. Seniors, SEPTA Pass holders and children 4 and under are free.

Tickets can be purchased online and at the Independence Visitor Center at 6th & Market St. Tours are not narrated, but free maps and guides are available. Bus stops are clearly marked and the PHLASH® can be boards at any stop as it provides hop-on hop-off service. (ridephillyphlash.com)

Stop One provides access to Penn’s Landing and the Delaware Waterfront. The waterfront is alive with free seasonal activities day and night, including the Blue Cross RiverRink, Summerfest, Cherry Street Pier and the PECO Multicultural Series. The series runs from June 2- September 15 and showcases the richness of Philadelphia’s diversity. (#MyPhillyWaterfront)

Independence Visitor Center is the third stop, but I suggest starting here and visiting Independence National Historical Park (INHP) which encompasses, among others, Independence Hall, the President’s House, and the Liberty Bell Center. Consider walking the four blocks to the historic Mother Bethel AME Church and Washington Square.

Independence Hall tours are free, but you must obtain a timed ticket at the Visitors Center in summer.

The President’s House was the rental home of the Washington household while he was president.

It interprets their life there, as well as that of the enslaved people who lived there with them. The house was torn down, but the current structure outlines the rooms that once existed. (www.nps.gov/inde/index)

The National Constitution Center is showcasing the first permanent American exhibition, “Civil War and Reconstruction: The Battle for Freedom and Equality,” dedicated to presenting how constitutional challenges regarding slavery led directly to the Civil War and how post-war alterations to the document were designed to fulfill the hopes and promises of the Declaration of Independence.

A 3,000 sq. ft. gallery relates the story through artifacts, live performances, and personal testimonies. This exhibit is outstanding. (www.constitutioncenter.org)

The Romanesque revival Mother Bethel AME Church at 6th and Pine established in 1782, is located on the oldest piece of land continuously owned by African Americans in the country. There is a museum within the church. Washington Square Park, 6th & Walnut St., was laid out in 1682 as South East Park. It was referred to as Congo Square because newly arrived Africans were imprisoned there prior to sale. The park also served as a gathering place for slaves, cemetery for Revolutionary War soldiers and victims of the 1793 Yellow Fever epidemic. (https://www.visitphilly.com/things-to-do/attractions/mother-bethel-african-methodist-episcopal-ame-church/)

Reading Terminal, located at Stop Four, is the oldest continuously operating farmer’s market in the US. It dates from 1893 and is a great place for lunch or a tour break. (www.readingterminalmarket.org)

Stops Six through Twelve take visitors along Benjamin Franklin Parkway and are accessible to the Barnes Foundation, Rodin Museum, Philadelphia Museum of Art and Franklin Science Museum. “Marvel: Universe of Super Heroes” is currently on view at the Franklin Museum Institute. The exhibition showcases more than 300 artifacts and commemorates Marvel’s 80th anniversary. (www.fi.edu/exhibit/marvel-universe-super-heroes)

The Rocky Statue is located in a small grotto in front of the Art Museum. This is also the transfer location for the Zoo, the oldest in the country, and Please Touch Museum PHLASH®. Please Touch will be exhibiting “America to Zanzibar: Muslim Cultures Near and Far,” an exploration of Muslim cultures, until September 2nd. (www.pleasetouchmuseum.org)

Eastern State Penitentiary is one of the most haunted sites in the country and at Stop Nine you can hop-off and take a tour. Highlights of a visit here are the daytime Voices of Eastern State Audio Tour, exhibits and Al Capone’s cell. (www.easternstate.org)

The Museum of the American Revolution is the final stop. It is one of city’s newer museums and traces the story of the revolution from the initial Boston controversies through the Revolution and into the creation of the republic. Gallery highlights include an impressive collection of British, American and French arms, documents, uniforms and Washington’s original battle tent. (www.amrevmuseum.org)

CityPass is a way to save as much as 44% on entrances and it is valid for nine consecutive days. Tickets are available online in mobile or printed form. (www.citypass.com)

The issue of the victimization of ride share users has been in the news lately. Here are a few easy things a rider can do to avoid problems. At time of booking obtain the name, picture and license plate number, use it for verification and send it to a friend along with your estimated arrival time as an added safety measure. Check to see that the child locks are not in use. When in doubt, GET OUT!

A’rcopedico has crafted Town, a shoe that molds to fit your foot making touring all day a possibility. The shoe allows your foot to breathe, has arch support and weighs less than one pound making it perfectly packable. (www.arcopedicousa.com)

Quick guide for taking your family to New York City