Smooth Traveler: A Portuguese family adventure in Cascais and Sintra 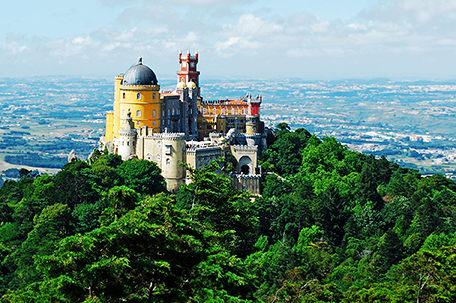 The first European nation to set out to explore the continents was Portugal.  Ironically, it is now a primary destination for international visitors wishing to explore Europe.

The country offers something for all ages, from history, shopping and culinary adventures, to beaches, hiking and panoramic views from castle walls. Portugal is a great value for the money, is the fourth safest country in the world, and English is widely spoken — all things that make it ideal for families. (www.visitportugal.com)

Cascais is located along the North Atlantic coast, and was a quiet fishing village until the king discovered it and it became the premier summer residence in the 18th-century for the rich and the royal. The first wealthy residents rented the fishermen’s cottages, but soon began to construct elaborate villas that remain standing. (www.visitcascais.com)

The five-star Martinhal Lisbon Cascais Family Resort provides both unique and ideal luxury accommodations for a visit to this region for families, couples and individuals.

The experience can be tailored so that both adults and children can maximize the deluxe offerings in a variety of ways. Childcare is offered free of charge in the form of babysitting, a baby room, play area for toddlers and preschoolers, and the 7,700-sq. ft. Raposinhos Kids Club. Hands-on, age appropriate workshops include hiking, biking, surfing, horseback riding, Lego robotics and a football academy (soccer). Adults can spend the day as a family and have worry-free, travel-free experiences, knowing their children are safe and active. (#martinhal)

Accommodations include luxurious villa and guest rooms outfitted with amenities such as Luxe Linens’ designer bath products. A golf course, spa, pool, gym, bar and the Oterraco Restaurant make the Martinhal a family destination in itself. (www.martinhal.com/cascais)

As part of Martinhal’s commitment to giving back, they support community and global social initiatives.

This year, the Martinhal Resort Cascais held its third annual conference. This entrepreneurship event presented international speakers  who focused on the need for the special skills and talents that female entrepreneurs bring to the work force.

The conference also showcased best practices, personal testimonials, networking, guided discussions and statistically based information. Research supports the facts that successful companies have at least one female in its team of founders, and that the number of female entrepreneurs has doubled in last seven years.

In 1995, the cultural landscape of Sintra was designated a UNESCO World Heritage Site based on its standing and influence as the first European center of Romantic architecture.

The city center, Pena Palace and the medieval Castle of the Moors make Sintra an absolute must-visit.

Pena Palace, built in 1840 by King Ferdinand II — who was dubbed “the artist-king” by artist Antonio Feliciano de Castilho — is the most visited palace in Portugal.

The surrounding 500-acre labyrinthine park showcases the palace’s blended architectural styles — Gothic, Egyptian, Moorish, Renaissance, and an extremely colorful exterior. It was constructed on the site of a 16th century monastery nestled 1,600-ft. high in the mountains.

The palace, preserved as the royal family left it in 1910, is entered through the Moorish “Door of the Alhambra.” Highlights of the self-guided tour is the largest room — the kitchen, the private apartments, Moorish inscriptions and the magnificently glazed tiles. Tip: Park the car and take bus 434 from Sintra.

The Moors occupied Iberia from 711 until 1249. A pivotal event — the 12th-century surrender of the fortress the Castle of the Moors to the Christians — took place 11-miles from Cascais. On a 1,350-ft. peak in the 8th-century ,an “unconquerable” castle was built to protect the trade center, Sintra. After the conquest, the fortress fell into ruin until it was restored in the 1840s.

The stabilized ruins are explorable via cobblestone pathways and evidence of Moorish building techniques — high walls and looming towers — are still visible. The panoramic views are spectacular.

Portugal was neutral in WWII and many of the crowned heads of Europe took refuge on the Portuguese Riviera, along with the spies of all nations tasked with keeping tabs on them. One of those spies was British spy Ian Fleming, who used this experience as a basis for his James Bond novels. He began the first novel here, and based “Casino Royale” on Casino Estoril, the largest casino in Europe. Allied spies and European royalty roomed in the Hotel Palácio and “On Her Majesty’s Secret Service” was filmed there. A visit lets you live the dream.

Many sites can be seen from the 1904 red and yellow electric carriages that travel nine miles through the Village of Sintra to the seaside. Stops include Boca do Inferno, the Mouth of Hell, a tiny bay on the Atlantic Ocean with a small cave. Legend has it that it was the gateway to the underworld.

Cabo da Roca, the westernmost point in Europe, served as a landmark for sailors. A monument and rest stop are located at the site. Less than one mile away sits Europe’s westernmost village Azoia, named by the Muslims.

If you decide to divide your time between Cascais and Lisbon, the five-star Hotel Martinhal Chiado is a great option. The Chiado neighborhood is filled with 18th-century buildings reconstructed after a 1988 fire with no loss of integrity.

The hotel is situated in the center of Lisbon within walking distance of shops, restaurants, the National Theater and public transportation. The luxury apartments range from studio to family apartments. There is a Kids Club on the premises as well as the M Bar Family Café. (www.martinhal.com/chiado)