Short on travelling cash for a vacation? 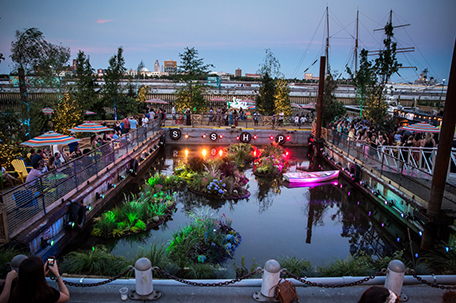 Do a Philly STAY-CATION at Spruce Street Harbor Park!

Sometimes the best experiences are right in your own backyard.  In addition to the many great places Philadelphia has to offer for the summer months, Spruce Street Harbor Park has become one of the spots to be.

The third year of the beloved pop-up park features more hammocks for lounging, more food to enjoy and more ways to celebrate the summer on the waterfront.

Presented by Univest and Valley Green Bank, the summer oasis is free and open to the public every day through September.

That’s awesome news, as the 2014 version of the park was one of the coolest Philadelphia had ever seen, with a boardwalk with arcade games, a hammock lawn, a bocce court, a floating restaurant, a beer garden and so much more. 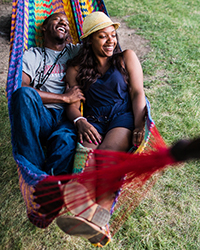 1) Where to start? The best place: Relax in a Hammock.

More than 50 colorful hammocks have been strung between the trees in Spruce Street Harbor Park — and laying in one is the perfect way to spend a summer afternoon.

Yes, Spruce Street Harbor Park has a bocce court. Actually, it has two bocce courts — and they’re right on the bank overlooking the river. Can’t be beat.

3) Or a game of shuffleboard.

4) Or maybe a game of giant chess.

The giant game of chess is popular with both kids and adults.

5) Get out on the river on a kayak or paddle boat.

Kayaks, tandem kayaks, canoes and foot-pedal swan boats as well as radio and wind-powered vessels will be available for public rental in the Penn’s Landing Marina. 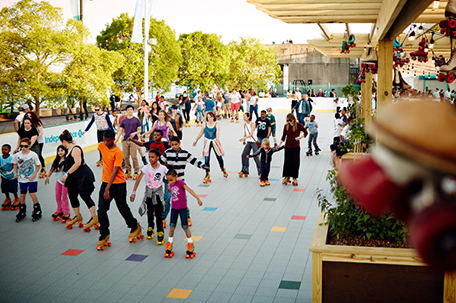 6) Or head a short walk north of Spruce Street Harbor Park and check out the Blue Cross RiverRink Summerfest.

Blue Cross RiverRink Winterfest transforms into a warm-weather edition with a roller rink, a boathouse-styled Lodge, a play area for kids, food and drink options and summer events throughout the season.

Even if you’re not roller skating, the Summerfest space will be a great place to hang out for people of all ages.

Surrounding the rink, the Summerfest space will become a family-friendly hangout with natural landscaping outside, a wraparound porch, an arcade space and a boathouse-themed Lodge serving summertime-appropriate food and drink from the Garces Group and other Philadelphia restaurants.

7) Thirsty? Back at Spruce Street Harbor Park, sip on a delicious brew at the Visit Philly Beer Garden Series this summer.

The Visit Philly Beer Garden Series will be at Spruce Street Harbor Park every Friday from 5-8 p.m. from May 22 to July 10 (skipping July 3). Be there! 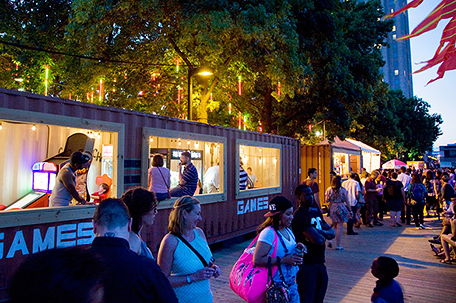 8) Hungry? Grab a bite to eat at one of a number of new awesome spots on the boardwalk.

For 2015, attendees can snack on ice cream and desserts from the S.S. Franklin Fountain, donuts and fried chicken sandwiches from Port FedNuts and grilled summer staples from Froman’s.

A different Jose Garces restaurant will occupy the floating barge this summer.

The floating barges with walk-up food service from shipping containers return for 2015, but with expanded offerings from Garces in the form Chifa, offering Peruvian and Chinese fusion. Spruce Street Harbor Park really upped the ante this summer when they added a floating restaurant to the pop-up park. Operated by the Garces Group, the restaurant is the perfect addition to the Delaware River Waterfront.

9)  Get your picture taken on the #visitphilly chair

The oversized Adirondack chair is located on the Harbor Park’s boardwalk and the perfect photo op for your visit. Be sure to share your photos with hashtag #visitphilly.

10) Catch a sunset from the floating barge.

While the sun sets to the west, the magic hour lighting cast over the waterfront makes for some pretty spectacular views. And photo ops… Remember, hashtag #visitphilly.

11) Stroll the boardwalk along the banks of the river.

The boardwalk boast concessions like hot dogs, popcorn and funnel cakes as well as arcade games like skee ball.

If you hang out at the park once the sun goes down, you’ll be treated to a pretty awesome light show in the trees above. Makes for a pretty solid date night.

Wait until you see the park at nighttime. It’s breathtaking.

The park is open until 1 a.m. seven days a week.