Seeing London in A New Light 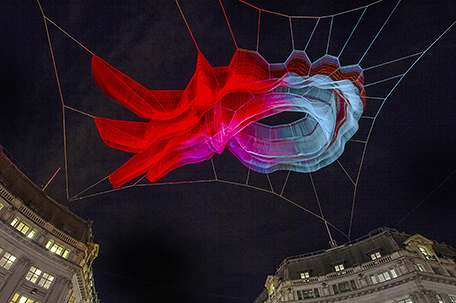 ABOVE PHOTO:  Looking up at the magnificent light sculpture at Oxford Circus in London, during the Lumiere London light festival. (Photo: chrisdorney/shutterstock.com)

“People are looking for magic in their lives and to experience something that stays with them forever,” says Helen Marriage, the director of Artichoke, the producers and creators of the Lumiere London festival.

“People respond to light in a special way,” Marriage continues. “and in the middle of winter, when night falls early, it’s just so wonderful and uplifting.”

In January 2018, London’s most iconic buildings, streets and landmarks will again be illuminated artistically for the British capital’s largest night-time festival, Lumiere London.

Lumiere last lit up London in 2016, when millions of people visited the city to interact with the art installations. In January, the festival returns to London much bigger and bolder than before. 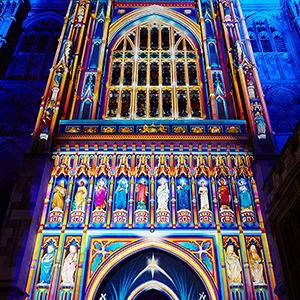 As an example, Westminster Abbey, which has stood at the heart of London for hundreds of years, has been the setting for every coronation in the British monarchy since 1066 and has hosted 16 royal weddings, will be one of the key festival locations again.

It will be illuminated by the French digital artist, Patrice Warrener, who will present the second installment of The Light of the Spirit for Westminster Abbey, one of the most popular installations at Lumiere London in 2016.

Other installations include: Love, a Matisse-inspired animation of two paper-cut figures who spend the evening kissing and dancing to a bespoke soundtrack at the Royal Academy of Arts; interactive illuminated singing see-saws in Mayfair and, at Kings Cross, an immersive work that imagines a world underwater.

The artists will create bespoke light installations for each selected building in London, turning the capital into a gallery without walls. Lumiere London is about more than the art: it’s about people sharing public space and re-discovering the city.

“Lumiere London offers the chance for visitors and Londoners alike to see the city in a totally new light, explore new areas, and see a familiar city in different ways,” says Helen Marriage.

“Our mission from the start,” Marriage continues, “was to make great art accessible to everyone and to bring back the joy of experiencing it. Lumiere London is about reclaiming the streets and bringing a new dimension to the daily life of our city.”

Lumiere London will take place on closed roads over four nights between 18 and 21 January 2018 at locations around the city, including: London’s West End, Mayfair, Westminster, Piccadilly, St James’s, Fitzrovia and Kings Cross.

To find out more about the festival and to plan your trip to London, see https://www.visitlondon.com/lumiere#7kk8D0owMHHw6OqU.97