It’s sea turtle season in Florida. Here’s how to see them. 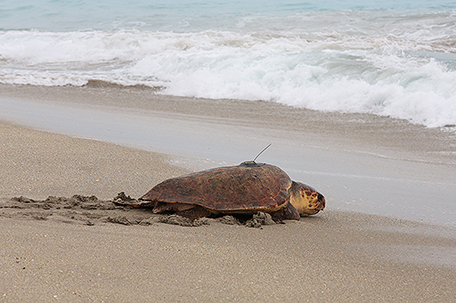 ABOVE PHOTO:  Adult female loggerhead turtle fitted with a transmitter is released back into the wild.  (Photo: Shutterstock)

Many Florida beaches welcome a special type of visitor as the weather gets warmer: sea turtles.

Female sea turtles crawl out of the water from spring to early fall to build nests and lay eggs on the beach at night. Babies hatch some 60 days later and crawl back into the sea. It’s a fragile process. Only an estimated one in 1,000 turtles survives to adulthood, according to the Sea Turtle Conservancy .

It’s a crime in Florida to disturb sea turtle nests or harass turtles. Visitors should keep their distance, staying behind any turtle they might see, and must not shine lights in nesting areas, including flashlights, cellphone lights or camera lights. Some beaches turn off artificial lights to promote nesting activity.

There are several sanctioned ways to observe sea turtles.

Turtle rehab facilities around the state sometimes hold public releases when an injured turtle has recovered enough to return to the sea. 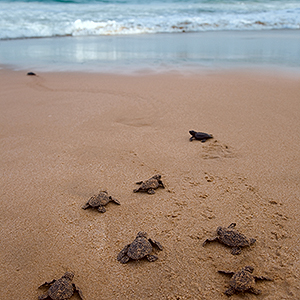 And public sea turtle watches take place at night on a number of Florida beaches, typically with participants registering in advance for the walks, which tend to fill up quickly. Trained guides who hold special permits scout for nests, looking for a turtle that’s far enough along in the process that she won’t be distracted. Tour participants are then escorted to the area for a look. The tours usually take place between 8 p.m. and midnight.

Sign-ups open May 1, for example, for weeknight walks June 1-July 27 in Melbourne Beach, Florida, hosted by the Archie Carr National Wildlife Refuge. The walks cost $15 and are limited to 20 people a night, https://conserveturtles.org/barrier-island-center-educational-programs-sea-turtle-walk-reservation/.

In many areas where nesting takes place, turtle patrols hunt for nests by day and rope them off so they can’t be disturbed. In Gulf County in northwest Florida, where sea turtle season runs from May 1 to Oct. 31, the St. Joseph Peninsula Turtle Patrol on Cape San Blas takes a “turtle walkabout’’ each morning at dawn looking for signs of crawls. Nests are marked, and small groups of visitors can join part of the patrol, which includes measuring and marking nests with posts and caution tape so beachgoers know to stay away.

Three varieties of sea turtle, green, leatherback and hawksbill, are classified as endangered. Two varieties, loggerhead and olive ridley, are listed as threatened.

Sometimes, visitors may simply stumble across a nest or nesting turtle. For example, it’s not unusual to see loggerhead turtles on Florida’s central east coast, where they nest by the thousands. “When it’s high season for nesting,’’ said Visit Florida spokesman Tim Declaire, “all you need is a late-night walk on the beach.’’

Just remember: Don’t get too close and don’t shine any lights. When nesting is disrupted, a turtle may fail to lay her eggs or may not fully camouflage her nest. Hatchlings face additional challenges: They may die before reaching the water or be caught by predators.

The Florida Fish and Wildlife Conservation Commission lays out warnings and other information in this brochure: http://myfwc.com/media/418667/Seaturtle_ShareBeach_Visitors.pdf .

From the mountains to the seashore, explore the Lone Star State’s nationally recognized sites

Georgia and Sherman’s March to the Sea (Part One)