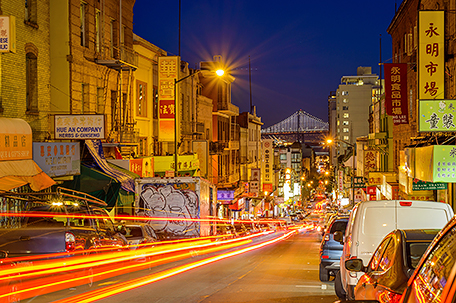 SAN FRANCISCO –Red lanterns sway in the wind. Streetlamps from the 1930s cast a yellow-green glare onto century-old buildings. Neon glows from a pair of dive bars. Figures are silhouetted waiting outside a restaurant, and a lone woman makes dragon beard candy in a tiny storefront window. All are nighttime scenes along Grant Avenue in San Francisco’s Chinatown.

The avenue, which runs north and south, is one of the oldest streets in the city. In the late 1800s, it became home to Chinese immigrants who were fleeing unrest at home, seeking opportunity here or following the Gold Rush. Many of the neighborhood’s buildings today can be traced to reconstruction efforts after the 1906 earthquake.

Grant Avenue is a bustling street during the day, often filled with tourists in search of souvenirs or locals shopping for food. But at night the street is quiet, allowing for leisurely strolling and new discoveries. Many stores close early with only a few bars, restaurants and bakeries open late. It’s an interesting place to stroll this time of year and reflect on the area’s culture and history as Lunar New Year approaches, Feb. 16, launching the Year of the Dog. 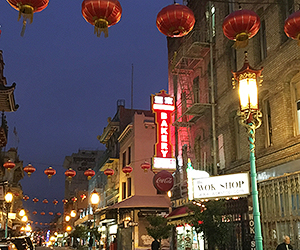 At the intersection of Grant Avenue and Washington Street are a pair of dive bars located 10 steps away from each other. One is the Li Po Lounge, named for a poet in China’s Tang Dynasty, dating to the 1930s. Inside its red lacquered doors sits a golden Buddha statue behind a wraparound bar. The Li Po is known for its $9 Chinese Mai Tai made with three rums, pineapple juice and a “Chinese Liqueur’’ served in a plastic hurricane glass and packing a wallop to the unsuspecting. Nearby is the Buddha Lounge, a dinky, quirky dive known for betting on your drink in a game of Liar’s Dice between you and the bartender.

Where Grant Avenue meets Broadway Street near the North Beach district is China Live, which opened last year and serves as an anchor point for the revitalization effort within the greater Chinatown neighborhood. The four-story building is a culinary and cultural landmark. It includes multiple restaurants, bars, a retail market and event space. China Live was founded by George Chen and his wife Cindy Wong-Chen. George Chen is known as the creator of two well-known restaurants elsewhere in the city, Betelnut and Shanghai 1930.

The heart of China Live’s ground floor is the Market Restaurant and Bar Central, a 120-seat restaurant with eight stations serving delectable cuisine ranging from dumplings and dim sum to Chinese charcuterie and barbeque. Upstairs is Eight Tables, a fine dining restaurant that has an eight-course, constantly evolving Chinese tasting menu. The restaurant is accessible via a secluded back alley entrance with a rickshaw available on request to take you from the main street.

With Old Shanghai as an inspiration, Cold Drinks at China Live was recently named as one of the city’s best new bars. The 40-seat lush and mysterious bar features Scotch-centric cocktails and overlooks parts of the skyline and edge of Chinatown. For the lunar new year, Cold Drinks will be releasing 12 drinks in February inspired by the Chinese Zodiac animals, including this year’s beverage, named, what else, The Lucky Dog.