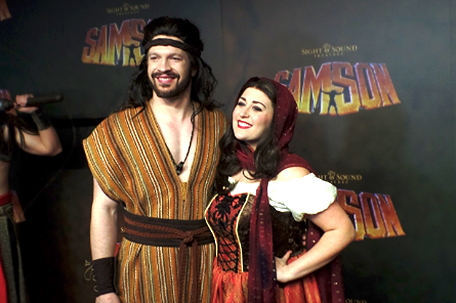 ABOVE PHOTO:  Samson and Delilah on red carpet

Lancaster’s Sight & Sound Theater premiered its newest production last week. It is the 27th original pro-duction, each more spectacular and technologically innovative than its predecessor. Samson, the subject of the current show, is the latest of the Biblical heroes whose life is taken from the page to the stage and told through word, song, dance and settings. Each of the individual theatrical elements is woven into a tapestry that brings the story to life and delves into Samson’s life and character deeply enough to expose truths, les-sons and enduring relevance.

Glenn and Shirley Eshelman, founders of the Sight & Sound Theaters in Lancaster, PA and Branson, MO, began in the 1970s by presenting Bible programs to local organizations armed with only a series of slides and a record player. In 1976 they established Living Waters Theater, using the same techniques but soon be-gan adding actors. The first full-scale production opened in 1987 and because the popularity of their produc-tions grew they constructed an entertainment complex in 1991. That theater burned down in 1997 and was replaced by the current 2,000-seat Sight & Sound Theater, one of the nation’s top three theater destinations and Lancaster’s #1 attraction. @BibleToLife 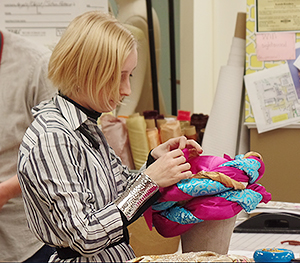 ‘Samson’ took 3.5-years to bring to life with 99 percent of the work on sets, costumes and lighting, completed in-house and only the music created off-site. Story and spectacle meet on the immense 300-ft. wraparound stage that provides a totally immersive experience. Sets are initially created as carved wooden miniatures and when erected reach heights of 28-ft. and ultimately the interiors are braced with 6-miles of aluminum.

Thirty-four trained animals, camels, pigs, horses and even cats are part of the story and the aisles are often pathways to the stage. Clothing and wig designs are researched and the 54 ethnically diverse actors are clad in 4-miles of fabric equal to 7,000-yards.

‘Samson’  is not your traditional hero of the Bible. He has more flaws than most, he is one of the world’s first superheroes and one of Israel’s Judges for 20 years. His birth was foretold to his mother and from birth he took the Nazirite vow to serve God and not to eat grapes, drink wine, come in contact with a corpse or cut his hair. Samson chronically breaks his vow and commits sins but is favored by the Lord time and again. His fatal weaknesses appear to be vindictiveness and a love of foreign women and it is his love of Delilah that will be his downfall.

His story provides many opportunities for epic scenes and this production showcases every one splen-didly. The culmination of this story of sin, redemption and grace is Samson’s razing of the temple of Dagon and the scene is stunning. The story is written in the Book of Judges and brought to life at Sight & Sound. Fa-cebook.com/sightsoundtheatres

‘Samson’  will be in Lancaster until December 31, 2016. Eleven shows are presented weekly and group and individual tickets are available online. sight-sound.com 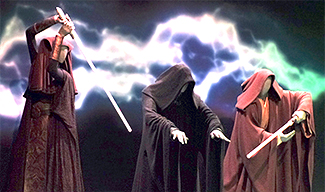 Spring and summer are ideal times to visit new exhibitions in the Northeast region. New York City is accessible and there are 3 must-see exhibitions on view in Midtown Manhattan. These immersive displays cover thousands of years and appeal to the adventurer in us all. nycgo.com

Discovery Times Square (DTS) is presenting “Star Wars™ and the Power of Costume,” a journey into the profound influence costumes exert on the viewer and the story.  Seventy original costumes are show-cased in thematic galleries and interpreted using informational plaques and interactive video kiosks. You do not have to be a fan to love this. #StarWarsCostumes and discoverytsx.com

“The Vikings Exhibition” is in the same building and will be available until September 5th. The exhibition presents Viking culture from 750 to 1100 AD. The tour is self-guided and includes a full-sized reconstruction of the Gokstad II, a Viking ship and more than 500 artifacts, many never seen outside of Scandinavia. discoverytsx.com/vikings-the-exhibition

“The Discovery of King Tut” is on view at Premiere Exhibitions on Fifth Avenue.  Howard Carter discovered the tomb of Tutankhamen on November 4, 1922. Visitors follow Carter’s journey beginning with a ten-minute introductory video. The tour follows Carter’s footsteps from discovery of the tomb to entering and cataloging objects from his viewpoint. You see the mummy itself with the 24-pound gold mask of Tut nearby and Tut’s golden sandals embellished with depictions of his foes on the soles so that he could tread on them as he walked. It will be presented until May 1, 2016. tutnyc.com

Reading on the Go:

The Adventures of Bibole, Rivol and Michelle by Brian Fujikawa. This children’s book prepares children for a life of adventure and travel while teaching tolerance and valuable moral lessons. It is ideal for reading and discussion as a family or for solo reading on a plane, train or car trip. It is available in all formats.

A Philadelphia Story: Founders and Famous Families from the City of Brotherly Love by Lori Litchman. If you are traveling closer to home this book is a perfect companion. It concentrates on the renowned men and women who established the city and created the Philadelphia that exists today. Ms. Litchman has taken great care to emphasize the city’s diversity and tell stories that are both historically interesting and compel-ling. It is available on Amazon.