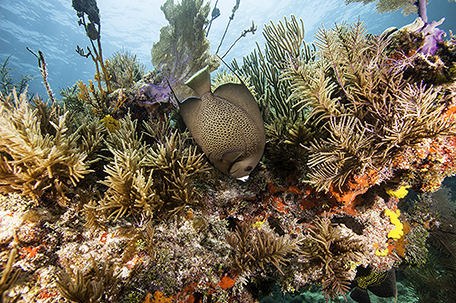 ABOVE PHOTO:  An Angel fish swimming over an Atlantic coral reef with a blue water background. In the John Pennekamp State Park in Key Largo, Florida.  (Photo:  Shutterstock)

KEY LARGO, Fla.–The Overseas Highway links Florida’s mainland with Key West, and some tourists drive straight through the chain without exploring until they get to the end of the road.

Those people are missing a lot to see and do on the 108 miles of highway and islands in between.

From 33-mile-long Key Largo to little Ramrod Key, which is less than 2 miles wide, the Keys are full of opportunities for adventure for anyone willing to slow down and look around. Here are some possibilities:

Located only 65 miles south of Miami on the island of Key Largo, John Pennekamp Coral Reef State Park is a good first stop on a road trip to Key West.

Extending 3 miles into the Atlantic Ocean, the park encompasses about 235 square miles of seafloor that includes the only living coral reef in the continental United States, and seagrass. Privately owned boats ferrying divers and snorkelers often hover over the reef, but the park and private vendors offer reasonably priced day trips for tourists.

Put on a swimming mask and stick your head beneath the water and a new world appears. Brightly colored tropical species like parrotfish and angelfish dart past waving fan coral, along with the occasional barracuda and stingrays.

U.S. 1, the official name of the Overseas Highway, makes a long, sweeping curve southward from the mainland toward Key West. There aren’t many twists or turns, but there countless side streets that link the highway with waterfront neighborhoods. Go venturing down a few of those lanes.

Residential areas that range from opulent to funky are hidden on side streets off the highway. Some houses are oceanfront mansions; the more interesting ones are a lot smaller.

Mobile homes painted all sorts of tropical shades line narrow streets in the upper keys, and residents go out of their way to give them an island feel. You’ll see decorations like metal parrots, mounted fish, homemade art and Jimmy Buffett flags most everywhere.

Many of those same neighborhoods are built around narrow canals that were dug of the coral bedrock decades ago to provide easier access to the sea. The best way to see the “wet’’ side of these spots is by kayak.

You’ll need a kayak , rental shops are plentiful , and a place to put it in the water, like the boat ramp beside the Caribbean Club on Key Largo’s Blackwater Sound. That done, start paddling.

Canals leading into neighborhoods are easy to spot along the shore. Head down one and you’re instantly surrounded by big boats, many of which hang overhead on davits that keep them suspended above the corrosive saltwater. Tiki huts and outdoor lounging areas line the canals.

Look down into the water and you’re likely to see a manatee, the endangered “sea cows’’ that live in backwaters around the Keys. These massive mammals are protected by federal law, so don’t try to feed or pet them. But also don’t be surprised if one pokes its head out of the water by your boat. 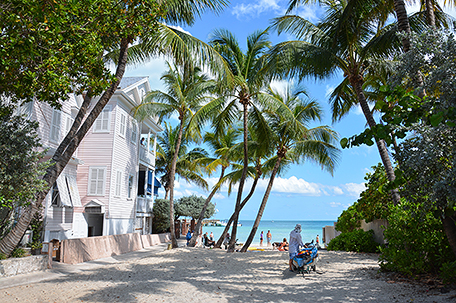 Thousands of anglers visit the Florida Keys each year hoping to catch tarpon, a mammoth species of silver-and-green fish that often grows larger than 150 pounds. Tourists also can feed them fish by hand at a few locations.

One of the best-known spots for getting an up-close look at tarpon is Robbie’s Marina of Islamorada, located at the base of a bridge at Mile Marker 77.

Visitors at Robbie’s pay $2 to enter a dock where a school of the fish hang out, and it’s $3 for a bucket of small fish to feed the tarpon. Grab a dead fish by the tail, hold it close to the water and wait a few seconds, there will be a tarpon grabbing a quick snack in no time. It may sound easy, but just try holding still when a 100-pound fish with a gaping mouth jumps out of the water toward you.

COUNT IGUANAS. OR CHICKENS. OR COCONUTS

Iguanas are the squirrels of the Keys. The green, long-tailed reptiles are easy to spot soaking up the sun on grassy roadsides, in parking lots, in trees and bushes.

But, chickens? Yep, free-range yard birds are near-constant sight also, strutting around neighborhoods and businesses. They don’t belong to anyone and are best known in Key West. But feral chickens are all over the Keys, and they have been for generations.

Look up in the palm trees or down at the ground and you might just see a coconut. If you want to add to the entertainment, find one on the ground in a public area and try to open it. Just remember: It’s not that easy, regardless of what that video on YouTube might claim.

Kinderdijk windmills a must-see on any trip to Holland