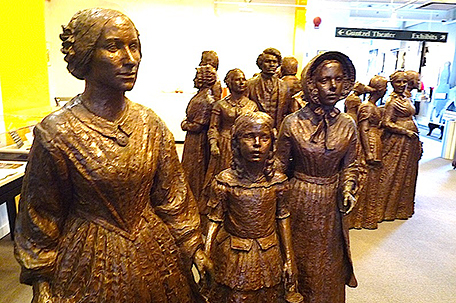 In 1848, 300 women and men, including Frederick Douglass, gathered in  Seneca Falls, New York to sign the Declaration of Sentiments, a document regarding the end of discrimination against women in every aspect of society. Colonial law was based on English common law that merged man and woman into one individual upon marriage and women had no legal standing separate and apart over her property or finances. By 1777, women had lost the right to vote in every state.

The road to the August 26, 1920 ratification of the Nineteenth Amendment was a long, difficult and circuitous one. It is best traced at sites in the state of New York and includes women of all ethnicities. It declares, “The right of citizens of the United States to vote shall not be denied or abridged by the United States or by any State on account of sex.”(www.iloveny.com). 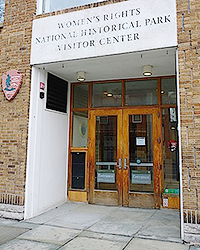 Many of the people involved in the women’s rights movement were previously staunch abolitionists and civil rights advocates. At the conclusion of the Civil War and the 1870 passage of the 15th Amendment declaring, “The right of citizens of the United States to vote shall not be denied or abridged by the United States or by any State on account of race, color, or previous condition of servitude,” many women felt let down by their exclusion and began to protest vehemently for women’s rights. They used the organizational, fundraising and speaking skills learned as abolitionists.

It should be noted that as early as 1776, Abigail Adams wrote to John Adams during Philadelphia’s Continental Congress to, “Remember the Ladies.” In 1851, former slave Sojourner Truth, speaking at an Ohio women’s rights convention, gave her famous “Ain’t I a Woman?” speech. (www.sourcebooks.fordham.edu/mod/sojtruth-woman).

In the 1830s, abolitionist organizations and the Underground Railroad were prevalent in Syracuse in Onondaga County. More than 650 African-Americans lived in the county. Along with their White counterparts, they actively spirited people to Canada. (www.pacny.net/freedom_trail).

The museum of the Onondaga Historical Association has an outstanding, interactive exhibit on the UGRR that introduces visitors to the personal stories through artifacts, exhibits and video. An exhibit on the 1851 Jerry Rescue relates the story of the rescue of fugitive William “Jerry” Henry from slave catchers by a crowd of citizens. 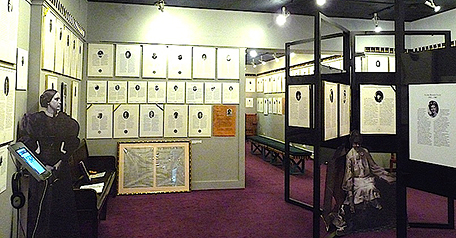 The Jerry Rescue Monument on Clinton Square is a life-sized bronze depiction of the incident. It faces north toward Canada where Henry made his eventual escape. The history of the  Native American inhabitants and their influence on the nation is also depicted in a permanent exhibit. (www.cnyhistory.org).

Matilda Joslyn Gage is the unsung hero of the women’s rights movement. Her father was an abolitionist and her home was an UGRR station. Her stance on the rights of women was modeled on her close interactions with the matriarchal Haudenosaunee Indians living in the area. Ultimately, she was considered too radical for Stanton and Anthony.

A 15-minute film introduces a self-guided tour. Each room on the tour is based on one of her social justice themes. The front parlor is dedicated to the works of her son-in-law, Frank Baum, author of “the Wizard of Oz.” We can see her influence on the character of Dorothy. Her home is included on the National Underground Railroad Network to Freedom. (www.matildajoslyngage.org). 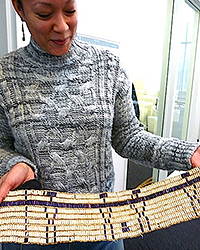 Ganondagan, State Historic Park, is the state-of-the-art home of the Seneca Art and Culture Center situated on the site where the Seneca and Haudenosaunee established the “Town of Peace.” Visitors can explore a replica Bark Longhouse, self-guided trails, videos and a unique museum.

The museum interprets the story of the six nation Haudenosaunee Confederacy, Mohawk, Oneida, Onondaga, Cayuga, Seneca and Tuscarora, that inspired the Constitution and the 1848 Declaration of Sentiments. Their symbol, bundled arrows stronger than one, is depicted on the Great Seal of the United States. (www.ganondagan.org).

Seneca Falls is renowned as the cradle of women’s rights. The first convention was organized by abolitionists Elizabeth C. Stanton and Philadelphia’s Lucretia Mott and held there in 1848 at the Wesleyan Chapel. Stanton lived in Seneca Falls along with her husband and seven children and her house is open daily. (www.senecafalls.com). 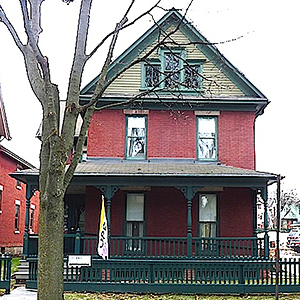 Women’s Rights National Historical Park is adjacent to the chapel and is an ideal place to begin a tour. An orientation film, “Dreams of Equality” and an exhibit gallery enhance your visit. Also, on display is memorabilia from “12 Years a Slave.” The lobby’s bronze “First Wave” sculpture consists of life-sized figures of some of those in attendance at the first convention including Douglass.

The National Women’s Hall of Fame was founded in 1969.  Since that time 276 women in the arts, athletics, business, education, government, humanities and philanthropy have been inducted. The NWHF will be moving to the 1844 Seneca Knitting Mill because a larger space is needed. I encourage you to visit their website where you can view photographs, learn the stories and hear their voices. (www.womenofthehall.org).

“It’s a Wonderful Life” is one of world’s favorite movies.  It is believed that Frank Capra, after visiting Seneca Falls, modeled the mythical Bedford Falls after the city. The “It’s a Wonderful Life Museum” is filled with memorabilia, photographs, toys and documents that relate to the stars, their characters and the movie. The tragedy of Antonio Varacalli probably inspired George’s scene on the bridge and you can learn the true story here. (www.therealbedfordfalls.com). 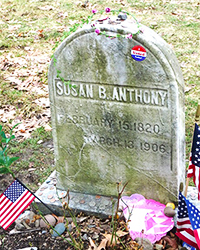 The Susan B. Anthony House & Museum is located in Rochester.

She lived in this 12-room brick house from 1866-1906. Tours of the house include her 3rd-floor workroom and the room in which she died in 1906. Ida Wells-Barnett was known to stay there when in Rochester.

The boutique Gould Hotel is newly renovated and offers luxurious accommodations, exemplary service, an on-site restaurant, free parking and complimentary WIFI. Best of all, it is located in the heart of Seneca Falls and within walking distance of the major sites. (www.thegouldhotel.com).

For current research on African-American women leaders in the suffrage movement, go to www.suffragistmemorial.org/african-american-women-leaders-in-the-suffrage-movement.