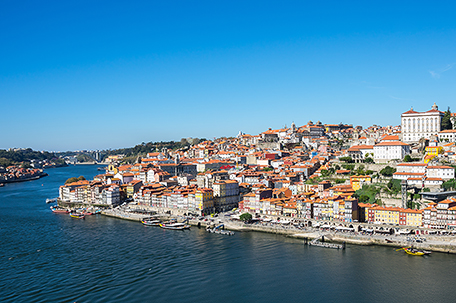 ABOVE PHOTO:  A view of river Douro and the Old town of Porto, Portugal. (Photo: shutterstock)

PORTO, Portugal–I was lost, looking for port wine caves dug into hills across the bridge from Porto. I trudged up a hill and rounded a blind corner, sidling against a stone wall to avoid tour buses flying toward me, when I stumbled on the highlight of my day: a nearly empty tasting room and private wine-cellar tour.

It was a reminder that in Portugal’s second city, everything cool seems to be right around the corner, or more likely, just up a hill.

Porto’s historic core is set upon two hills, with the rejuvenated downtown between them spilling down to the Douro River. A pedestrian promenade lined with medieval merchant houses and cafe tables runs underneath the two-level Luis I Bridge, which joins the upper and lower sections of Porto and the city of Gaia. On one side is the twin-domed Porto Cathedral, on the other is the circular Monastery of Serra do Pilar. When the sun sets, the colors of the white monuments, stone towers and terra cotta roofs blend together, and the entire city glows orange. It’s one of the world’s most spectacular cityscapes. 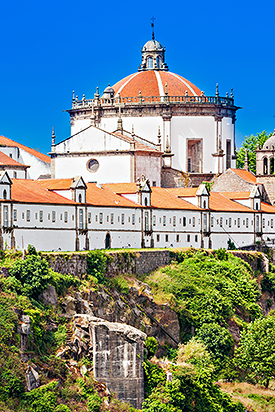 Porto is small enough to walk past the highlights in half a day, but I spent nearly a week hoofing it around, taking in one stunning sunset after the next. Lookout points are labeled on tourist maps as miradouros. Each is unique, though none is a match for Praia da Luz, or beach of light. A historic trolley runs from the center to where the river flows into the ocean in the Foz do Douro neighborhood. A short walk north through a seaside park brings you the rocky beach, where I nursed a glass of vinho verde, Portugal’s light, dry white wine, on a plush lounge chair. The sun dipped into the Atlantic where medieval maps once depicted fire-breathing sea serpents.

Fortunately, there’s more to Porto than postcard-worthy pictures, with more to come. The thwack of hammers echoing off the tiled facades on nearly every street heralds a tourist boom. Already, the downtown around Avenida dos Aliados, which was seedy as recently as five years ago, has new life.

Concept stores run by collectives of crafters have opened along Rua do Almada. Workshop Popup combines four stores into one for cork handbags, locally designed clothes and handmade souvenirs actually worth buying. It also offers private cooking lessons for a bargain at a show kitchen in the back. For nightlife, the string of bars and restaurants around Rua da Galeria de Paris has a range of choices, from sophisticated to rowdy. The bars get busy almost every night of the week but often not until 11 p.m. or later.

One of Porto’s best-known sites is Livraria Lello, a bookshop in a grand neo-Gothic 1906 building on Rua das Carmelitas that features a massive curved staircase, elaborate painted plaster ceiling and a stained-glass skylight bearing the Latin phrase “Decos in Labore’’ (dignity in work). There’s a fee to enter (tickets are 5.5 euros online), but the fee entitles you to a discount on purchases.

I waited until the end of my trip to dive into port wines, those supple, fortified dessert wines the city is known for. After dinner at a friend’s apartment, my hosts, an architect and an owner of a design studio, pulled out a white port made by Taylor that’s typically served chilled as an aperitif. They recommended visiting Taylor’s tasting room, one of the biggest, and Croft, the oldest. They also urged me to stay away from the expensive, flashy options along the riverfront. 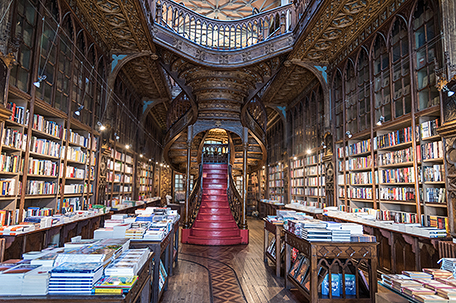 Livraria Lello, one of the oldest bookstores in Portugal. (Photo: shutterstock)

It was while searching for Croft the next day that I stumbled on Churchill’s, which isn’t listed on most maps of the port circuit. Their wine was rich and full, and slightly less sweet than others. A guide led me through the “cave,’’ a warehouse dug into the granite hill with a steady temperature in the 60s. Hundreds of oak barrels were stacked four high, aging port for up to 40 years. Turns out the British commercialized a product the Portuguese had been making for centuries, which explains the Anglophile names.

At Croft, founded in 1588, the charming tasting room with tables and stools made from wine barrels led into an impressive cellar with stone arches and casks the size of small houses. Taylor was the most commercial of the three, but the 10-euro entry fee includes a three-wine sample and self-guided audio tour, so it’s a good choice for a novice with time for only one stop.

Sufficiently buzzed, I asked a clerk to recommend somewhere for a quick bite before rushing off to the airport. The five-star Yeatman Hotel hit the mark with a cheese plate, a glass of dry Douro Valley red and an expansive patio overlooking the city. It was just around the corner, and just in time for sunset.

PORTO, PORTUGAL: http://www.visitporto.travel . Located three hours by train from Lisbon. Stay near the Clerigos Tower in the Vitoria neighborhood, the center of nightlife and only a 15-minute walk from the higher-priced tourist spots near the river. Also, try francesinha, a Porto specialty that’s like a meatier croque monsieur. Cafe Santiago near the Coliseu music venue serves up a gut-buster drenched in a tangy beer sauce, and locals like the francesinha at Cufra on Avenida da Boavista.