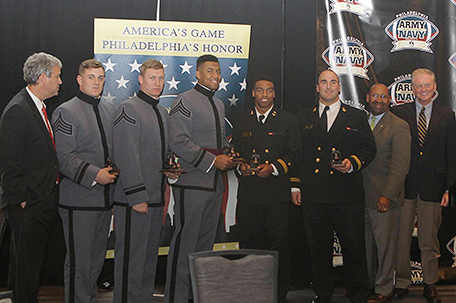 In the Army-Navy Game’s 125-year history, 86 historic meetings have been held in Philadelphia, the unofficial home of the century old rivalry. The Army Black Knights and Navy Midshipmen have come to expect a level of fanfare in Philadelphia unparalleled in other host cities. On Saturday, December 12 at Lincoln Financial Field, ‘America’s birthplace’ will once again host ‘America’s Game,’ feeding the competitive spirits of die-hard fans and first-time ticket-holders alike.

“The Army-Navy Game in Philadelphia epitomizes the American spirit and should be a bucket-list item for every sports fan,” said Larry Needle, Executive Director of PHLSports, a division of the Philadelphia Convention and Visitors Bureau, (PHLCVB). “It is a true honor for us to serve as the Game’s home.”

A public pep rally with the Academy’s Pep Bands and cheerleaders, Boxing Classic, Gala, fan tailgates and more will all add to the fanfare in preparation for the big event. Right up until the morning of game day, mental and physical “Patriot Games” events will test the teams’ competitive spirits at pull-up contests, a ‘Rocky Relay,’ a tug-of-war contest and leadership reaction course at locations throughout the city.

Pulling ‘double duty’ on the heels of Temple University and Notre Dame’s October face-off, ESPN College GameDay will return to Philadelphia, wrapping up its season-long pre-game coverage from the Army-Navy Game for the second consecutive year.

On December 12, gates open at 11 AM for the Army-Navy Fan Fest and whether clad in Army black and gold, or Navy gold and blue, every football fan will be awed as the festivities begin at 12:15 PM. with a military ‘march-on,’ followed by the kick-off at 3:00 PM.

Selected as an accessible site between the U.S. Military Academy in West Point, New York and the U.S. Naval Academy in Annapolis, Maryland, Philadelphia has hosted the Army-Navy game 86 times since the event’s inception in 1890. It has since been widely adopted as the city’s unofficial ‘bowl game.’ The festivities will return to Philadelphia once again for the 2017 Army-Navy Game.

Limited tickets and hospitality packages are still available for the event starting at $85 and can be purchased www.phillylovesarmynavy.com/tickets/.