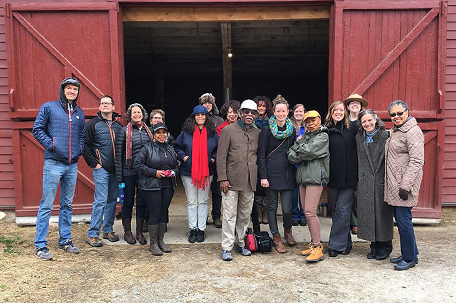 ABOVE PHOTO:  The Petermans visit to the Carl Sandburg home

ASHEVILLE, N.C.–There were some sketchy moments as Tanya Cummings thought her self-described “short, little legs,’’ wouldn’t get her up and over the boulders way taller than her 4-foot-11, well-coiffed and manicured frame, or out of the deep woods in the Plott Balsam Mountains.

But with her two trusty walking sticks (which she sometimes tossed aside, saying “I don’t need you’’ before grabbing for them again), a Super Girl determination in those “little legs’’ and occasionally a “Help me!’’ directed at her boyfriend, Larry Pender, Cummings came through the “hike of her life’’ actually squealing with delight, and with not a single cracked fingernail.

She and a group of five members of the brand-new Pathways to Parks, a nature outing club formed with the seemingly simple mission of getting people of color outdoors and into national parks, took on their most challenging hike to date on Oct. 30 at Waterrock Knob in the Haywood County area of the Blue Ridge Parkway.

It was only 3.5 miles round-trip, but there was plenty of climbing as the group, accompanied by a Citizen-Times reporter and photographer, made their way through a spruce-fir forest to the 6,292-foot Waterrock Knob summit, and then on to the 6,250-foot-high Browning Knob.

They trekked over single-track trails riddled with mud holes, rocks covered in ice and clambered over boulders that required the use of two arms, two legs to scale, along with an occasional a push from a friend.

The day was cold to start, but piercingly clear. The fall color was muted to brown and green, with an occasional pop of red and orange on the Blue Ridge horizon. It was such a spectacular fall day that even though it was a Tuesday, and the fall foliage was lacking in luster, many people of all ages made their way up to the Waterrock Knob Summit to gasp at the views.

When the group stopped for their first rest, Cummings, 66, who retired to Horse Shoe after 36 years working for the federal government in California, asked a question.

“Out of all the people we met today, how many of them were people of color?’’ The obvious answer, other than those in the Pathways to Parks group, was zero.

Hence the need, she said, for such a group, although she knows the challenge of breaking stereotypes and long-held social “norms’’ is much harder than climbing a 6,000-foot mountain.

Last March, Cummings and her friends Flo Mayberry, a retired University of California Berkeley librarian who now lives in Bat Cave, and Kathy Avery, Kathey Avery, a nurse with the Asheville Buncombe Institute of Parity Achievement, attended a UNC Asheville lecture by Audrey Peterman and her husband, Frank.

“They were on fire,’’ Cummings said. “Meeting them changed my life.’’

The Petermans’ talk focused on how they fell in love with the national parks in 1995 after their youngest child moved away and they were Florida empty-nesters. They bought a Ford truck and traveled 12,500 miles across 40 states in two months, visiting national parks from the Smokies to Yosemite to the Badlands to Olympic.

“In Yellowstone it struck us, all these hundreds of thousands of people we’re seeing in national parks, they have one thing in common — they’re all White. What happened?’’ Audrey Peterman said at her UNCA talk in March. “In the entire time, we counted four black people from coast to coast in the national parks.’’

The sorry statistics bear out in Western North Carolina, rich in public lands that are free to everyone, including Great Smoky Mountains National Park, the most visited of all national parks, and the Blue Ridge Parkway, with 16.1 million visitors last year, the most popular unit in the National Park Service.

Yet visitor-use studies show 97 percent of those visitors are White.

According to the U.S. Census, 13 percent of Americans are Black or African-American, 18 percent are Hispanic, nearly 6 percent are Asian and American Indians 1.3 percent.

Peterman said she recognized there was a mountain-sized lack of information inside the Black community about these public lands that belonged to all Americans, and launched Earthwise Productions, Inc., an environmental consulting and publishing firm focused on connecting people to the public lands system.

Her talk lit a fire under Cummings, Mayberry and Avery, who with George Ivey of the North Carolina Arboretum and Tony Beurskens of Conserving Carolina, started a group to carry on the Peterman’s message of bringing people of color to the parks.

They started with short hikes that included Craggy Gardens on the parkway and the Wild Cat Rock Trail in the Hickory Nut Gorge. They gathered more members, now up to 13, came up with a name, and built up to more ambitious hikes. 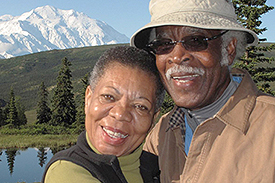 Pender, 66, a retired administrator from New York University, scouted the trail, including the 1.4-mile round-trip side trail the group hiked off the Waterrock Knob Trail to see the remains of a Cessna that crashed in 1983 – a big surprise for the group – where Cummings said a blessing for the two people who died there.

Pender said he grew up on a tobacco farm in Wilson, North Carolina, hunting rabbits and exploring with his brother in the woods, day and night. After living in New York City for so long, he didn’t realize how big the outdoor racial divide was until he moved back to Wilson six years ago.

Why does he think there is such disparity in who enjoys the outdoors?

“Some may not be able to afford it. It’s free, but you have to drive here,’’ Pender said of the parkway hike with no entrance fee, but nearly an hour’s drive from Asheville.

“What about people who don’t have a car or who can’t afford the gas to get here? Or people who work all week and want to relax on the weekend and see this as work.’’

Joshua Perkins, 22, originally from Dallas, graduated in May with a degree in environmental education from Warren Wilson College and is now the community engagement specialist for the N.C. Arboretum. He was on his first hike with Pathways to Parks last week.

Being an African-American who likes to hike, backpack and rock climb, he said he is sometimes teased by friends for “acting White’’ for taking part in those activities.

“That just sounds silly. The outdoors are for everyone, not just White people,’’ said Perkins, a cellist, who said his passion for the outdoors began as a child while attending music camp in the mountains of New Hampshire.

“I told myself then, `I want to engulf myself in the outdoors. I want to do something to benefit the environment,’’’ he said.

He tries to get friends, especially black friends, to hike or rock climb with him, but it’s difficult.

“We have a stereotype that Black people shouldn’t be outdoors. We should be inside and minding our own business. I don’t think that’s true at all. Black people can have a sense of appreciation for the outdoors like White people. We have to get rid of that stereotype,’’ Perkins said. “If you can’t get outdoors on your own, join groups like this one and carpool.’’ 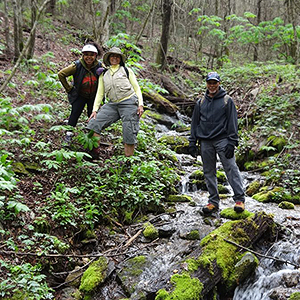 The overall day was “quiet and peaceful. Nice being outside the office and actually spending time outdoors,’’ he said

Elsea Brown, 26, of Asheville, is the director of Blue Ridge Forever, a nonprofit consortium of land trusts.

“I see this as a movement,’’ she said of Pathways to Parks, “especially in Asheville where we have such beautiful opportunities to be outside, it was really exciting to be able to do that with people who look like me, because a lot of times that’s not the case.’’

Even though at times on the hike Brown was alternately hot, sweaty, freezing, out of breath, hungry, or falling into mud, she said the camaraderie of the group, and Cummings’ lighthearted way of cracking everyone up made the day full of fun.

“Tanya was always bright and shiny. She’s someone I look up to,’’ Brown said.

Cummings said hiking and spending time outdoors, whether it’s birding, strolling in a state park or having an outdoor picnic, is important, especially for people of color.

“People of color have a high rate of diseases such as diabetes and hypertension. Doctors are now prescribing nature as a way of healing people from stress. I think that if more people of color would take advantage of health benefits that nature offers, they’d be more focused on their physical and mental well-being,’’ Cummings said.

She has big hopes for Pathways to Parks. She is recruiting members and hike leaders, no matter what race, to join the club, as long as the commit to the mission “of getting people of color out to our national parks,’’ is planning a trip to the Grand Canyon next year, and she hopes to eventually have a national membership.

Brown said she can see that in the future, but with baby steps, such as asking people who have never been hiking to go first to a waterfall where you can drive and walk on a short, paved trail. And then, “sell it with the ‘gram,’’ she said, meaning Instagram, the language that transcends all ages and races.

Golf industry aims to diversify “The Game of Kings”