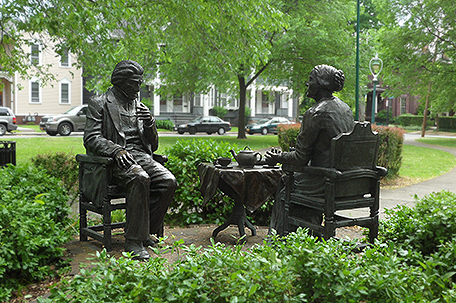 ABOVE PHOTO:  Susan B. Anthony and Frederick Douglass Statues

“Think not forever of yourselves, O chiefs, nor of your own generation. Think of continuing generations of our families, think of our grandchildren and of those yet unborn”

–The Peacemaker, Founder of the Iroquois Confederacy

When the Erie Canal opened the benefits to western New York were immediate. Settlements sprang up along the route, businesses flourished, travel became both less arduous and less hazardous and transport of raw materials and finished products became affordable. This was the frontier and perhaps the most significant benefits was the transmission of ideas and philosophies that resulted from the influx of people who traversed the region intermingling with those who resided there. The region became an incubator for progressive ideas, a haven for freethinkers and a place where women could push the boundaries and expand the limits of conventional society.

The history of women in the region challenging tradition actually precedes not only the canal, but also the first contact with Europeans. Around 1100 AD, a Huron male from the Lake Ontario area entered Mohawk territory. This messianic-like figure came with a message of harmony and he became known as “The Peacemaker.” He proposed the unification of the five warring nations with each pledging to comply with a formal constitution to be called the Great Law of Peace, the Gayanesshagowa. The first person to fully believe in his message was a Seneca woman, Jikohnsaseh. She worked tirelessly to spread his message, sometimes in the face of personal danger.

Four of the nations agreed but the Onondagas refused. It was at this point that a great thinker and good negotiator was needed. Jikohnsaseh brokered a deal that satisfied all sides and allowed all the nations to emerge as equals. Due to her influence, women were given the position of Clan Mothers and as such they were charged with transmitting the culture, selecting tribal chiefs and removing a transgressing chief. The Head Mother of the Women’s Clan Council, known as the Jikohnsaseh, was to encourage peace. Women were responsible for actively maintaining peace because they truly understood the toll of war for they were the ones who lost their husbands and sons in battle. The Great Law of Peace is an extension of the Confederacy’s basic tenet that “peace is not simply the absence of war but is a state of mind and a way of life.” The United States government abolished the title of Jikohnsaseh in 1848, but they could not eradicate women’s tribal influence.

Jikohnsaseh, the Mother of Nations, lived and is buried in Ganondagan State Historic Site (GSHS), the Seneca Nation’s capital until the French destroyed it in the late 1600s. When she First Lady, Hillary Clinton listed DSHS as part of the First Lady’s Treasures Tour.

William Pryor Letchworth was an abolitionist Quaker who made a fortune in Buffalo as an industrialist and producing leather cavalry items during the Civil War. He purchased 1,000 acres that included three waterfalls, forests and a stunning river gorge beside the Genesee River in 1859. Once natives, who named the land “Sehgahunda”,  “the land of the three falls”, occupied the valley. It is currently referred to as “The Grand Canyon of the East.” His home was situated on a bluff above the river and the views are awesome. Upon his death, he gifted the property to New York State and in 1906 the land was used to create Letchworth State Park. The park has been expanded and is now 14,350-acres and 17 miles long. The Civilian Conservation Corps completed the stonework within the park and a statue to honor their achievements is located within the park.

The Mt. Morris Dam was constructed in the 1950s to prevent Rochester from flooding. It is the largest retention dam east of the Mississippi. Free dam tours are regularly scheduled.

A lengthy list of activities are available within the park including 23 hiking trails, camping, snow tubing, deer and turkey hunting, cross-country skiing and kayaking. Letchworth’s home is now a highly rated restaurant known as the Glen Iris Inn that offers fine dining. www.glenirisinn.com

Long before Letchworth, who was interested in the region’s history, collected Native American objects and these artifacts, along with articles that belonged to him are part of the collection featured in the W. P. Letchworth Museum. The stone museum is situated behind the Glen Iris Inn. A highlight of the displays is a huge prehistoric mammoth skull.

On a hill above the museum, accessed by a set of rustic steps, is a complex of sites related to the Seneca. These sites are linked to events that occurred approximately 500-years after the death of Jikohnsase. Mary Jemison was born aboard a ship bound for America from Ireland in the 1730s. She was kidnapped from Pennsylvania by Shawnee Indians and eventually sold into slavery to the Seneca. She married a chief and had one son before her husband was killed in battle. She wed a second chief and had six children before he too was killed. All of her children were given English and Seneca names and when settlers offered to take her back to “civilization” she chose to remain with the tribe.

Mary was called upon to act as both translator and negotiator for the tribe. Her skills were so renowned that she came to be known as “The White Woman of the Genesee”. She negotiated 18,000-acres for her family when the government divided the Seneca land. She and her family resided there until they were removed to a reservation in Buffalo, NY in 1831. She died two years later. W. P. found her burial site and had her body relocated in 1874 on his estate.

The first site on the hill is a cabin that Mary gifted to her daughter, Nancy. In a tiny square in front of the house stands a statue of Mary. She is clad in Seneca clothing and bears her son, Thomas, on her back. An unfurnished Seneca Council House, dating from the1700s, is the earliest evidence of the fur trappers and French Jesuit missionaries that settled in what would become Rochester. In 1789, white settlement began when Ebenezer Allan constructed two mills at the falls. Four years later, Nathaniel Rochester arrived with a group of people from Maryland. He purchased real estate and the town was under development 10 years later. It was originally incorporated as Rochesterville and then as Rochester. www.visitrochester.com

Rochester was a haven for those who held what were considered extremist sentiments. Prominent freethinkers made the area their home and many of their equally radical friends visited the region often. Because it was a stronghold of abolitionism, Frederick Douglass moved there with his family one year after he became legally free. His home was a stop on the Underground Railroad. That same year he, Martin Delaney and William Nell founded the North Star Newspaper in Memorial African Methodist Episcopal Zion Church.  No existing home of Douglass’ remains in Rochester and the remaining home with which he has the greatest connection was the Hamilton Street home of his daughter.

Rochester’s women supported abolitionism and through contact with them he became a supporter of the Women’s Rights Movement. In 1848, Douglass attended the first women’s rights convention held in nearby Seneca Falls. The National Women’s Hall of Fame is located there. www.greatwomen.org

Douglass is buried in Mount Hope Cemetery in Rochester. The Frederick Douglass Resource Center is located diagonally across Susan B. Anthony Park from the home of his good friend Susan B. Anthony. www.frederickdouglassrc.com

Sculptor Pepsy Kettavong created “Let’s Have Tea,” a larger than life bronze diorama featuring suffragist Susan B. Anthony sharing a cup of tea with Frederick Douglass. They first met while he was on a speaking tour in 1845. Visitors are invited to interact with the statues and children are often seen seated on their laps.

Susan B. Anthony lived at 17 Madison Street from 1866 until 1906. The modest three story Victorian home is where she wrote, planned and met with her friends. Today it is a museum that interprets her life through the interior spaces, memorabilia, documents and photographs. The furniture in the house is original and her second floor bedroom contains the bed in which she died. The front parlor is the one where she was arrested for voting illegally in 1872. She was tried, found guilty and fined $100.00 www.susanbanthonyhouse.org

Anthony was born in 1820 into a family of Quaker activists. Throughout the 1850s she played an active role in support of abolitionism and temperance as well as women’s suffrage. Under her direction the National Woman Suffrage Association proposed an amendment allowing the vote for 40 consecutive congressional sessions.

Susan B. Anthony famously said, “Failure is impossible.” This is true of women’s rights and visiting the Finger Lakes Region. You cannot fail to love it. www.fingerlakes.org

On July 5th from 5 to 9 PM, Confederate soldiers will once again take the Shriver House as Gettysburg relives the fourth day of the Battle of Gettysburg. One hundred and fifty-one years ago 165,000 soldiers descended on this rural Pennsylvania town and engaged in one of the defining conflicts of the Civil War. The Shriver House became a focal point both during and after the fighting on the field. You are invited to immerse yourself in Gettysburg’s story as you speak with the soldiers, watch doctors perform battlefield medical procedures and learn all about the mission of the sharpshooter. The Shriver House was fully restored in 1996 and this is visitors only opportunity to experience history where it actually happened. www.shriverhouse.org.

“The Last Great Invasion,” a commemoration of the 151st anniversary of the Battle of Gettysburg will take place on the Yingling Farm, film location of “Gettysburg,” on July 4, 5 and 6. Five major battles will be re-enacted and there will be a living history village on-site. Reduced price tickets and bleacher seating are on sale at www.supportetix.com. Gates will open at 8:30 AM daily. www.gettysburgreenactment.com and www.destinationgettysburg.com.

Philadelphia has always been the place to be on the Fourth of July but this year the celebration will be even more special. A series of signature events and activities will be featured from June 28th through July 6th at our iconic sites, the National Constitution Center, Independence National Historical Park, Independence Visitor Center. Everyone will be there including Washington, Jefferson and Franklin. You should be there too. Complete information is available online. www.historicphillysummer.com

A New York State of Mind